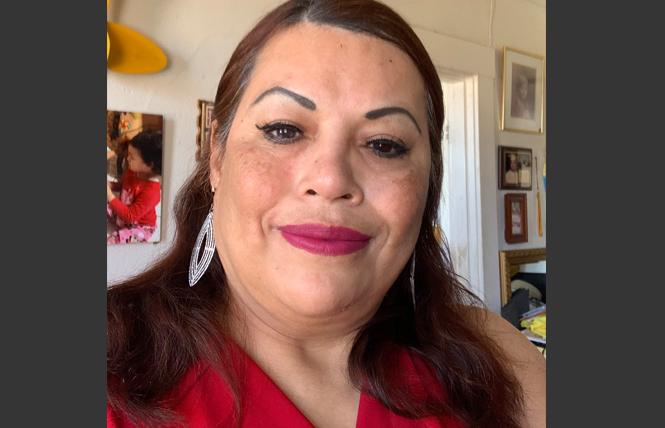 In the past two decades, Claudia Cabrera has gone from a client of Instituto Familiar de la Raza — new to the city and indeed to the country — to director of the institute's HIV prevention, education, and support program.

"I was named director of Sí a la Vida in April of this year," Cabrera, who is a 57-year-old lesbian transgender woman, told the Bay Area Reporter. "I'll have been working here for 19 years in September. I first came as a client, then I became an outreach worker in 2002, and from there I've been a health educator."

Instituto Familiar de la Raza, or IFR, is a nonprofit that for four decades has aimed "to promote and enhance the health and well-being of the Chicano/Latino/Indigena community of San Francisco," according to its mission statement. Sí a la Vida, which translates as Yes to Life (the first two and final two letters of the program spell SIDA, the Spanish language acronym for AIDS), was first established at IFR in 1985 as "the first Chicano/Latino-specific HIV program in San Francisco," according to its website.

"It was the answer of IFR to the HIV epidemic," Cabrera said. "There were not services in Spanish for the Latino community, but the Latino community was severely impacted: mostly gay and trans folks dying in great numbers because there was very little information or not at all for that specific community."

Cabrera first came into contact with IFR and Sí a la Vida in 2001 when she came from Guatemala to the United States.

After beginning her transition in her home country, Cabrera began to experience discrimination and abuse, prompting her to come north of the border.

"I came with a lot of traumas from my country because of my gender identity," Cabrera said. "I was escaping from a lot of discrimination and violence in my home country."

Cabrera "came to live with people from Guatemala" stateside, but "was kicked out because of my gender identity."

"I came to Los Angeles first and didn't know about San Francisco until I came here as a homeless person in 2001," Cabrera recalled. "Here was the place I felt safest: around the Bay Area. But it was painful, and traumatizing, too, because the first day I was in a shelter."

It was at the shelter, on Howard Street, that Cabrera "cried because I knew I had a home I left behind, but now, looking to those days, I can say also that even though it was really painful, it was the first day I was able to be myself, to express who I am where people didn't say 'dress like this' or 'don't do this.'"

Cabrera participated in some HIV prevention workshops as she settled into the Mission neighborhood. She participated in Miss and Mr. Safe Latino, which Sí a la Vida hosts, in 2002 and began working for IFR.

"They were looking for someone transgender to work with the trans community to do outreach," Cabrera recalled.

Esperanza Macias, a lesbian who is IFR's policy and communications director, told the B.A.R. that Cabrera's presence will help guide the institute in a way that it can better serve its clients.

"One of IFR's philosophical pillars is 'tu Rees mi otro yo,'" Macias wrote in an email to the B.A.R. "The direct translation is 'you are the other me,' but is intended to convey that we are one community. Claudia's life experiences carries many of the life experiences of our communities. It is one way that IFR strives to reflect/mirror our community."

"At a time when immigrants are labeled as a drain on our economy, Claudia showed her commitment, perseverance, and natural leadership to serve our community," Macias stated. "As a result, our LGBTQ Latinx community is healthier because of her contributions."

Macias said in a phone interview that she's known Cabrera "for about 11 years."

"She was here before I got here," Macias said. "I think she represents the true diversity of the Latino LGBTQ community. As a transgender woman, as an immigrant, as a lesbian, as an HIV educator, she is who we want to reach."

Before her official appointment this spring, Cabrera had been acting program director for a year and a half before being appointed interim director in February. Cabrera replaces Rafael "Rafa" Velazquez in the role.

The goals of Sí a la Vida now are "to reduce the number of new cases of HIV in the San Francisco Latino community; increase access to health and social services for both HIV-negative and -positive clients; reduce the stigma associated with HIV status, sexual orientation, and gender identity; and increase the wellness and quality of life of LGBTQ Latinos in San Francisco," according to its website, which also states that the program did COVID-19 outreach and education, as well as contact tracing, during this most recent pandemic.

According to the San Francisco Department of Public Health's most recent HIV epidemiology annual report (), which covers 2019 and was published in September 2020, 20% of San Franciscans living with HIV that year were Latinx, and Latinx people accounted for 33% of newly diagnosed cases citywide. Latinos had the most cases per 100,000 throughout the 2010s of any ethnic group except for Black/African American people (in 2019 that rate was 61 per 100,000).

In a statement, IFR Executive Director Gloria Romero wrote that Cabrera brings her whole self to the job.

"We speak a lot about mind, body, and spirit at IFR, and Claudia brings all of these to her work," Romero stated.

Cabrera said her goal as the new program director is "to continue working and serving the LGBTQ community — focused on the Latino community, but we also help people of other ethnicities and races — and to continue to fight to provide services that they need in that community."

Cabrera also said that HIV prevention and care has to be a holistic exercise.

"HIV prevention is not just teaching people to use condoms or take medicine. There are so many needs that need to be addressed," Cabrera said. "My plan is to continue looking for resources to build up the community and continue providing services."

Cabrera declined to disclose her salary. Velazquez's salary is not listed on IFR's IRS Form 990 for Fiscal Year 2017-2018 (the most recent publicly available on ProPublica's Nonprofit Explorer). The agency's budget is about $10 million, according to the filing.