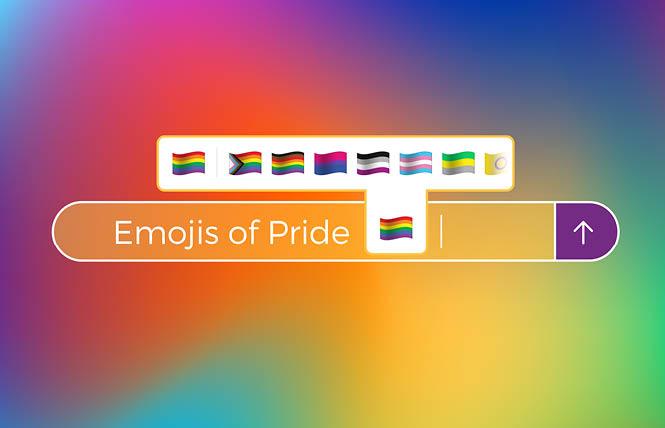 A new campaign aims to bring a plethora of Pride flag emoji to the keyboards of smartphones and other devices. To date, just the traditional six-colored rainbow pride flag and the transgender pride flag have been approved for use in texts and social media posts.

A request that the bisexual flag be added was rejected on February 4 last year by the Emoji Subcommittee for the Unicode Consortium, which oversees which emoji are added each year. The group annually approves less than 30 of the requests it receives for creating new digital icons; currently under consideration is a rainbow-colored infinity symbol that was suggested on April 21.

Now the Gilbert Baker Foundation, in conjunction with the New York marketing and advertising firm Ogilvy, is seeking to see not only the bisexual flag be approved for use but also flags celebrating the asexual, gender fluid, pansexual, nonbinary, lesbian, and intersex communities. The two agencies have launched an "Emojis of Pride" campaign to convince the consortium to update the Pride flag options with a total of 27 unique Pride flag designs.

"Emojis are such a huge part of how we express ourselves, and this Pride Month we want to make sure even more people in the LGBTQ+ community feel seen," stated Emily Clark, an associate creative director at Ogilvy.

Among the emoji Pride flag options the campaign would like to see the Progress Pride flag created by Daniel Quasar in 2018. It features the standard six colors of the rainbow flag with a rightward-pointing chevron on its side made of black and brown stripes for people of color and the pink, blue and white stripes of the trans flag.

And the campaign is calling for an emoji of what it refers to as the More Colors Pride flag that is also known as the Philly Pride flag. The city of Philadelphia created it in 2017 by adding black and brown stripes atop the rainbow flag to represent Black and Brown LGBTQ people.

"While the Gilbert Baker Foundation was founded to celebrate the original rainbow flag, we believe that other queer Pride flags have tremendous significance," stated Charley Beal, president of the foundation. "We believe there is room in the sky for all of these flags and we encourage everyone to fly the flag that speaks to their soul. At the Gilbert Baker Foundation, we are proud that they were all born of the rainbow flag."

The foundation is named after Baker, a gay artist who died in 2017. For the 1978 Pride parade in San Francisco, the late gay supervisor Harvey Milk had urged Baker to design a symbol for the occasion. With the help of his friends Lynn Segerblom, who now lives in Southern California, and James McNamara, who died of AIDS-related complications in 1999, Baker came up with a rainbow flag design that had eight colored stripes, with one version also sporting a corner section of stars to mimic the design of the American flag.

Baker would go on to reduce the number of colored stripes to just six and turned the rainbow flag into an international symbol of LGBTQ rights. His foundation recently donated a segment from one of the first rainbow flags that flew in front of San Francisco City Hall during the 1978 Pride parade to the GLBT Historical Society Museum in the city's Castro district, where it is now on public display.

It also worked with the museum to mount an exhibit about the various LGBTQ+ Pride flags in the windows of 575 Castro Street, the site of Milk's former camera shop and political campaign headquarters. A virtual version can be found online.

As the Bay Area Reporter was first to report in March, there are talks to turn the currently vacant storefront and residences above where Milk once resided into a national park site akin to the Stonewall National Monument in New York City. It encompasses the Stonewall Inn, which is also hosting the Pride flag exhibit, as well as the streets and park in front of the gay Manhattan bar where patrons rioted against police harassment in 1969. The uprising led to the first Pride marches being held a year later across the country the last Sunday of June.

Ogilvy and the Gilbert Baker Foundation worked together in 2017 on the "Type with Pride" campaign that resulted in a new typeface honoring Baker. Now they are hopeful of seeing a similar success with the pride flag emoji campaign, which has a dedicated webpage.

A change.org petition launched to gather public support for the emoji campaign had netted 1,363 signatures as of early Friday (June 18). It had surpassed its initial goal of 1,000 by June 17 and is now seeking to hit 1,500.

Berkeley resident Jennifer Daniel, the new head of and first woman to lead the Emoji Subcommittee for the Unicode Consortium, had tweeted in April that "any successful emoji proposal submitted this year would come to phones in 2023!" But she also warned that just a handful would be approved and explained why certain submissions are not selected.

"If your proposal is not advanced I know it can be disappointing," she tweeted. "A few reasons why this happens: Can already be represented by a sequence It's too specific. We can't add every type of flower, every type of drink."

While that could signal trouble for the Pride emoji campaign, Daniel has been a vocal advocate for improving the diversity of the digital icons. She helped get emoji for Mx. Claus, a gender-inclusive alternative to Santa and Mrs. Claus; a non-gendered person breastfeeding a non-gendered baby; and a masculine face wearing a bridal veil, as MIT Technology Review pointed out in a May interview it conducted with Daniel.

"Abstract concepts are globally relevant," she told the site. "We want emoji to be useful and popular and flexible. And multiple uses are at the top of my mind."

For those who don't want to wait for the emoji consortium to act, they can download an app that the Emojis of Pride campaign created via the Apple App Store that will allow them to use a keyboard with the myriad Pride flags. It can be found here.