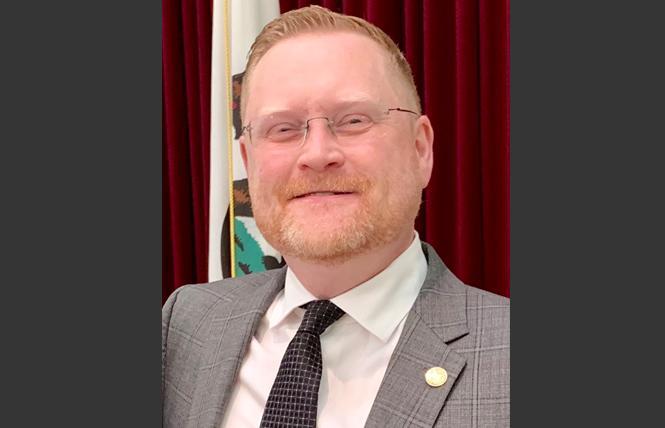 After two years as a tenant representative on the San Francisco Rent Board, Reese Aaron Isbell will be stepping down at the end of July. The gay mayoral appointee and his husband, Sheng "Bruce" Yang, are becoming homeowners.

Currently celebrating their fifth wedding anniversary in Alaska, the couple expects to complete the escrow process by August and move into their condo in one of the new buildings that have gone up in the city's Mid-Market area. Yang, a software developer for a tech startup, was able to purchase the home on behalf of the couple.

The couple had planned to travel to Alaska last year but had to postpone their trip due to the COVID pandemic. For Isbell, this will be his 52nd state he has visited, "if you count Washington, D.C. and Puerto Rico," he said. "It is the one state I haven't been to yet."

Isbell, whose term was to expire in August 2023, told the Bay Area Reporter having to step down from the rent board is "bittersweet." While he wished he could continue to serve, he is proud of what he has been able to accomplish over the last two years, from advocating for the housing needs of people living with HIV to calling for the Ramaytush Ohlone land acknowledgement that now begins each rent board meeting.

"I am happy with the time I have had working with the community and getting some things done at the rent board," said Isbell. "I feel the need to step down as I don't want to serve out the rest of my term when I no longer have the one qualification that matters, which is tenant."

He added that, "Many things I wanted to do going onto the rent board I feel proud I have done or began."

In his resignation letter to Mayor London Breed, Isbell noted, "With marriage, my husband and I are a team. Despite the fact that my own circumstances continue as an unemployed community activist, my husband's first-time home ownership will also be the first time I will own a home. As a longtime tenant living in a small studio for over 20 years, home ownership was simply never something I could have imagined for myself before."

Shared tenant experience
When Isbell, 50, first moved to San Francisco over two decades ago, he struggled to find affordable housing in the city. He ended up moving into a rent-controlled, studio apartment in the city's Lower Nob Hill neighborhood. Yang moved in when they wed in 2016.

But when Isbell sought to add Yang's name to the lease, their landlord tried to raise the rent. When the couple married, Yang received a green card and having documentation of his residence was a particular concern for the Chinese immigrant.

Isbell fought back as such a rent increase is illegal under the city's rent laws. Eventually the matter was resolved without the couple facing a spike in their rent, though Yang's name was never added to their lease.

The couple shared their experience publicly when Breed initially appointed Isbell to serve as a tenant representative on the city's rent board in late March 2019. It was believed to mark the first time an out gay man had been named to the commission, as several gay men had earlier been appointed to the body but their being members of the LGBTQ community was not reported on at the time.

The five-person rent board is composed of two tenant representatives, two landlords, and a neutral person all appointed by the mayor. It oversees how much property owners can annually raise rents on rent-controlled units and resolves tenant complaints against their landlords.

Rather than renominate longtime rent board commissioner Polly Marshall, Breed chose Isbell for the seat. Her doing so irked both Marshall and tenant advocates, who were upset that the mayor had not consulted them about the pick and questioned Isbell's qualifications for the role.

Members of the Board of Supervisors also raised concerns about seating Isbell, with even gay District 8 Supervisor Rafael Mandelman telling the B.A.R. at the time he did not support Isbell serving on the rent board and would vote to unseat him. With the supervisors expected to bounce Isbell from his rent board seat, Breed preempted them by making Isbell an alternate member of the oversight body.

In his place she named Kent Qian, a tenant and deputy city attorney for the Oakland City Attorney's office. Qian had served as an alternate for Marshall on the rent board for seven years.

Serving as an alternate to Qian, Isbell could vote on commission matters if Qian needed to be absent from meetings. Otherwise, Isbell could be active in all other aspects of the board.

"Yes, it was a challenge two years ago moving forward in this role," Isbell acknowledged. "Had I known I might become a homeowner two years later, I might not have pursued the role. But I had no idea that would happen."

Back in 2018 lsbell left his position overseeing government affairs for the California Life Sciences Association in order to return to the Midwest to campaign for Democrats running in the November midterms. He moved back in with his parents in Independence, Missouri to help get out the vote that fall for fellow Missourian Claire McCaskill, who lost her reelection bid for U.S. Senate, and attorney Sharice Davids, who won her race to become Kansas' first openly gay, Native American member of the U.S. House and was reelected last November.

After returning to San Francisco Isbell focused on his volunteer work as he sought employment. He worked on several campaigns, including as the campaign manager last year for Proposition A, known as the SF Health and Recovery Bond, and is now looking for a government affairs role.

Isbell had served on Breed's Transition Policy Team after she was elected mayor in 2018 and focused on transportation issues. A former co-chair and board member of the Alice B. Toklas LGBTQ Democratic Club, he had also served on the board of the Friends of the San Francisco Public Library.

Despite being on vacation, Isbell told the B.A.R. he intends to Zoom into his penultimate meeting of the rent board on Tuesday night so he won't miss one of his final meetings. His departure from the rent board next month will mean there will be no openly LGBTQ person serving on it.

With the oversight body focusing on racial equity issues during his tenure, Isbell, who is white, said he has spoken to Breed and the rent board staff about taking minority representation into consideration when seeking his replacement.

"I expressed my hope to the mayor and the rent board staff that for the appointment process they look at it through a racial equity lens and representing all our communities," Isbell said. "I trust the mayor will make the right decision."

Other LGBTQs looking to become first-time homebuyers can attend an upcoming free virtual seminar. As the B.A.R. reported in its News Briefs column, the LGBTQ+ Real Estate Alliance will hold a national first-time homebuyer seminar for queer people Wednesday, June 16, from 4 to 5 p.m. Pacific Time. Organizers said they believed this is the first such program ever offered specifically for the LGBTQ+ community. To sign up, click here.

Guest Opinion: Rent in the time of COVID-19

Breed names gay man to SF rent board
Sign up!