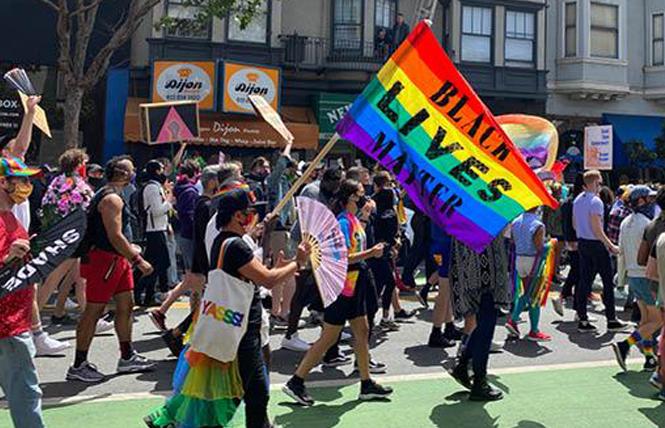 Activists have announced more specific plans for the second annual People's March and Rally: Unite to Fight, which in the absence of the official Pride parade has displaced it as a go-to event for Bay Area residents seeking to commemorate the anniversary of the 1969 Stonewall riots that kicked off the modern LGBTQ liberation movement.

"The People's March and Rally is happening on Sunday, June 27, and it's starting at the same location as last year, which is at Sacramento and Polk [streets], following the original Pride parade route in San Francisco," Juanita MORE!, a DJ and drag star who is co-leading the event, told the Bay Area Reporter June 9.

The march will begin at 11 a.m. and make its way to Civic Center for a rally featuring speakers. It will then "march from Civic Center on Market to Castro Street for Pride dance party," according to a draft news release sent to the B.A.R. by Alex U. Inn, a co-leader of the event.

As the B.A.R. reported last year, the inaugural People's March was held in the aftermath of the murder of George Floyd by then-Minneapolis police officer Derek Chauvin.

The event's focus is to "stand in protest of transgender and racial injustice, police violence and killings, unjust healthcare, the fight for gun control, reparations to Black People, and the right for people of color to have the right to vote without laws of intimidations," the release states.

"We will roar our voices in solidarity with our Black, Brown, and Indigenous trans and queer family, friends, lovers, and neighbors," the release continues. "We will show up in droves with amplified voices to advocate for the George Floyd Justice in Policing Act, denounce and condemn police violence against our communities, and raise awareness for the need to defund police departments, which will allow for funds to be reallocated to social services, mental healthcare providers, and social justice organizations."

Once the marchers reach the Castro, MORE! said "there will be DJs there and probably some more speakers." These, Inn confirmed, will include those who in past years performed on the Soul of Pride stage.

"It needs to happen again. A lot of the feedback we got last year is that it felt like the reason Pride happened in the first place. I do need to go to my party as well, so that will happen at some point in the day," MORE! said, referring to her annual Pride fundraising party taking place again this year at 620 Jones Street.

People's March won't be the only live event that weekend, either. The Trans March is set for Friday, June 25, with both online programming and in-person events, including a brunch at 10 a.m. at 726 Jones Street presented by Openhouse, LYRIC, the San Francisco AIDS Foundation and the San Francisco Community Health Center, and a resource fair from 11 a.m. to 4 p.m. on Dolores Street between 18th and 19th streets, according to the Trans March Facebook page. It will return as a march in 2022.

People's March organizers are urging participants to "please be responsible" and "in compliance with our federal and California state laws to wear masks, if not vaccinated, and to remain safely physically distant."

The city announced June 8 that it will fully align its COVID-19 restrictions with those of the state starting June 15. Mask mandates will apply in homeless shelters, nursing homes, on public transportation, and at events where over 5,000 people are inside or 10,000 people are outside.

Speaking to the B.A.R. June 4, gay District 8 Supervisor Rafael Mandelman — who represents the Castro — said that "the city is preparing itself for people landing in Civic Center for a party that wouldn't be permitted or allowed but wouldn't be broken up as long as everything is safe."

"It's complicated," Mandelman added, expressing the uncertainty so many feel this close to the June 15 California reopening. "People should not come expecting a big party in the Castro; but, you know, muscle memory."