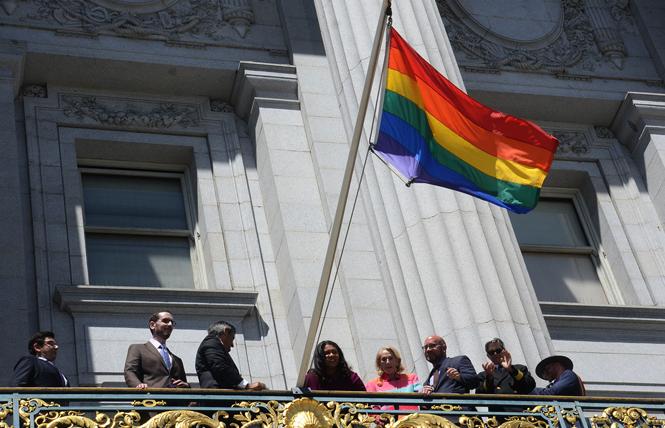 Officials stood on the Mayor's Balcony and raised the rainbow flag to celebrate the beginning of LGBTQ Pride Month and the reopening of City Hall. Photo: Rick Gerharter

Wearing heart earrings the colors of the transgender Pride flag, Lisa Strawn stood in front of the steps of San Francisco City Hall Monday capturing with her cellphone the unveiling of the Pride flag on the flagpole off the mayor's balcony. Despite a late night working, Strawn wanted to be on hand for the annual ceremony to officially recognize Pride Month in the city.

"I was not going to miss this," said Strawn, a transgender woman who was released from San Quentin State Prison last July after contracting COVID. "San Francisco offers everything to anybody, not just LGBTQ people."

Arrested at 19 for prostitution and later sentenced to 50-to-life for burglary due to California's "three strikes" law that automatically enhances a person's prison term on their third conviction, Strawn spent more than 35 years behind bars. During that time she became an advocate for herself and other LGBTQ incarcerated people.

She welcomed gay state Senator Scott Wiener (D-San Francisco) to San Quentin's first Transgender Day of Remembrance ceremony in November 2019 and advocated on behalf of his bill signed into law last fall that allows trans inmates to petition to be housed with other inmates of the same gender identity. Until now, inmates have been housed based on their gender assigned at birth.

Living in the city's Transgender District in the Tenderloin the last 10 months, Strawn told the Bay Area Reporter she is excited to be taking part in her first Pride Month in San Francisco.

"I have made it really well all on my own in San Francisco," she said. "This means a lot to me after coming out of San Quentin."

Strawn wasn't the only one voicing a hopeful note at the June 7 flag raising ceremony, which coincided with the reopening of City Hall to the public after being closed for more than a year due to the COVID pandemic. As of Monday, in-person services were once again being offered at the offices of Assessor-Recorder Joaquin Torres and gay Treasurer-Tax Collector José Cisneros.

Those looking to obtain marriage licenses from the office of County Clerk Diane Rea were also able to again do so, while civil marriage ceremonies will return Wednesday, June 9. For more information and to make an appointment online, click here.

"Who wants to get married? I got benefits," joked Mayor London Breed, a single straight ally, who said she was looking forward to performing wedding ceremonies herself.

She hailed the reopening of City Hall to the public and looked forward to further opening up the city June 15 when state officials are expected to lift even more business operating restrictions and public protocols put in place to stem the transmission of the coronavirus.

"We survived a pandemic y'all," said Breed. "We are still here. We are still kicking. City Hall is open."

Restrictions are expected to remain in place for large public gatherings and, unlike in other cities that are preparing to have in-person Pride events this year, San Francisco is not planning to host an official Pride parade or civic celebration the last weekend of June. 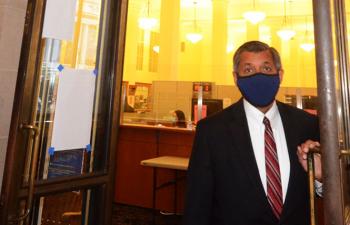 San Francisco Treasurer-Tax Collector José Cisneros stood outside the entrance to his office June 7 in the newly reopened City Hall.Photo by Rick Gerharter

Marking Pride Month
Yet the city has found myriad ways to mark Pride Month this year. June 1 saw the lighting of the pink triangle installation atop Twin Peaks. During her budget presentation earlier in the day, Breed announced $2 million to launch the country's first guaranteed income program for transgender residents as well as $12 million toward the acquisition of a site for a large-scale LGBTQ museum, as the B.A.R. was first to report.

The next day much of Market Street was decked out with Pride flags. Friday, June 4, the day that it welcomed back visitors to its 18th Street galleries in the LGBTQ Castro district, the GLBT Historical Society Museum unveiled a fragment of one of the first rainbow flags that flew in front of City Hall during the 1978 Pride Parade.

Gilbert Baker, who co-created the first rainbow flags with his friends Lynn Segerblom and the late James McNamara in 1978, had salvaged it the following June but had kept it out of public view. When he died unexpectedly in 2017 it was among the possessions inherited by his sister, Ardonna Cook, who unknowingly sent it to the Gilbert Baker Foundation to carry in the June 2019 Stonewall 50 Pride Parade in New York City.

Saturday saw commemorations of the 40th anniversary of the first reported AIDS cases take place at the National AIDS Memorial Grove in Golden Gate Park. Across town at Oracle Park that afternoon the San Francisco Giants celebrated Pride Month and debuted uniforms with the team logo in Pride colors.

This weekend, the team is partnering with Frameline, San Francisco's LGBTQ international film festival, and the San Francisco LGBT Pride Celebration Committee to present two movie nights at the ballpark. The film version of Lin-Manuel Miranda's musical "In The Heights" by director Jon M. Chu will screen Friday night, while the world premiere of "Everybody's Talking about Jamie," about a British teen who dreams of becoming a drag queen, takes place Saturday.

Attendees can expect a bit of the annual Pride parade, such as the Dykes on Bikes contingent, as part of the movie nights.

"I can't believe it is 51 years of Pride. We are ready to go back and socialize and have a drink with a mask on," said Jackson, who said she was honored to serve as a grand marshal this year even though there won't be a parade.

Having made it through the last year, with her own agency having to do most of its work virtually, Jackson celebrated now being on "the cusp" of coming out of COVID and being able to see people in person again.

Also serving as grand marshals this year are queer twin sisters Melonie and Melorra Green, who are co-executive directors of the African American Art and Culture Complex in the Western Addition. The cultural center has teamed with Pride to present a Solidarity Rally in honor of Juneteenth, marked as the official end to slavery in the U.S., from 3 to 9 p.m. Friday, June 18, at the facility located at 762 Fulton Street.

In an email to the B.A.R., Melorra Green expressed the sisters' gratitude at being selected.

"Being recognized by San Francisco Pride and our community is one of the most honored expressions to receive," stated Melorra Green. "We hope to amplify the voices of Black and people of color in the LGBTQIA community to fully express themselves. We all need to be allies in moving toward equity, social justice and love for those who have not been given space to be heard and understood. Know that change is coming."

Making her first public remarks since becoming executive director of the National Center for Lesbian Rights just as the COVID epidemic led to lockdowns last March, Imani Rupert-Gordon noted that not every LGBTQ person lives in a city as welcoming and supportive as San Francisco. Her agency is involved in legal fights across the country aimed at overturning anti-LGBTQ laws, especially those attacking the rights of trans youth, enacted by various state legislators.

"It is not just cruel. It is unethical and unlawful," she said of the wave of such bills that have been passed in recent weeks.

Rupert-Gordon called on Congress to pass the Equality Act, a sweeping federal LGBTQ rights bill currently stuck in the U.S. Senate despite President Joe Biden's pledge to sign it into law. Until then, LGBTQ residents in 29 states will continue to face discrimination, she noted.

"It will make every single person safer," said Rupert-Gordon.