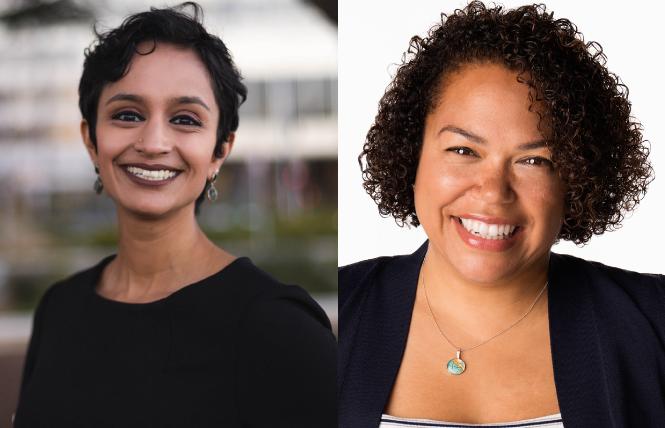 California's statewide LGBTQ advocacy organization is splitting its support between two female candidates — one queer, the other straight — in the special election for an East Bay Assembly race to represent part of Oakland, Alameda, and San Leandro.

Equality California announced Wednesday a dual endorsement of social justice attorney Janani Ramachandran, an Oakland resident who is queer and lesbian, and Mia Bonta, currently the Alameda Unified School Board president, in the contest to fill the 18th Assembly District seat in Alameda County. They are among the eight candidates seeking to succeed Bonta's husband, Rob Bonta, who resigned earlier this year from the Legislature after Governor Gavin Newsom tapped him to be the state's attorney general.

The primary will be held Tuesday, June 29, and if none of the octet secures more than 50% of the vote then the top two vote-getters will advance to a runoff election held on August 31. Whoever is elected to the seat will need to run for a full two-year term in 2022.

If elected Ramachandran would be California's first South Asian assemblywoman, as she is of South Indian ancestry. She would also be the first legislator who identifies as queer and first out API female state legislator.

The first-time candidate has proven to be a formidable figure in the race, tapping into a network of family and friends for donations to amass a sizeable campaign war chest. She also in late May secured the sole endorsement of the East Bay Times.

"The list of candidates in this race is long, but only one has a clear and well-articulated policy vision. That's Ramachandran. Voters should elect her to the state Assembly," noted the newspaper's editorial board.

In announcing its dual endorsement of the two Democratic women, EQCA said it "was proud" to support Ramachandran and noted her potential to breakthrough a political pink ceiling for LGBTQ candidates.

"Janani Ramachandran is the daughter of Indian immigrants and understands that equality and opportunity are cornerstone California values," stated EQCA Executive Director-designate Tony Hoang. "A tireless advocate for a more just and equal legal system, Janani would make history as California's first South Asian Assemblywoman and add to the ranks of the California Legislative LGBTQ Caucus."

As for also supporting Bonta, Hoang commended her for being a vocal ally on LGBTQ rights.

"As a mother of three and president of the Alameda USD School Board, Mia Bonta is an ally and a champion for LGBTQ+ and all students," he stated. "We know that Mia will fight for LGBTQ+ civil rights and social justice in our schools, in our criminal justice system, in healthcare and every other aspect of life, which is why we are proud to dual-endorse her campaign for Assembly District 18."

But Ramachandran has also racked up significant support among the more progressive branch of the Democratic Party. Among her endorsers are Congressman Ro Khana (D-San Jose); Alameda County Board of Education Trustee Ken Berrick; Berkeley School Board President Ty Alper; LPAC, which helps to elect out women to public office; bisexual City College of San Francisco Board of Trustees President Shanell Williams; and the Harvey Milk LGBTQ Democratic Club of San Francisco.

Two out Democratic male elected officials are also seeking to succeed Bonta in the Legislature. Gay San Leandro Unified School District Board of Education member James Aguilar, who turns 22 in November, would be the youngest person serving in the Legislature if elected, eclipsing bisexual Assemblyman Alex Lee (D-San Jose) by several years.

They are seen as underdogs in the race, as are Democrat Eugene Canson, a public health professional; Republican Stephen Slauson, an electrical engineer; and independent Joel Britton, a retail worker.

The East Bay Stonewall Democratic Club did not endorse in the race as no candidate received the 60% required.

The Tech Equity Collaborative is hosting a virtual AD-18 Candidate Forum at 4:30 p.m. Thursday with Bonta, Ramachandran, Slauson, and Vella. To register for it, visit https://techequitycollaborative.org/event/ad-18-candidate-forum/?utm_medium=email&utm_source=newsletter&utm_campaign=AD-18-Forum

From noon to 1:30 p.m. Saturday, June 5, the California Democratic Party Progressive Caucus is hosting a forum with Bonta, Ramachandran, Vella, and both Aguilars. To sign up, visit bit.ly/3c0GjUE