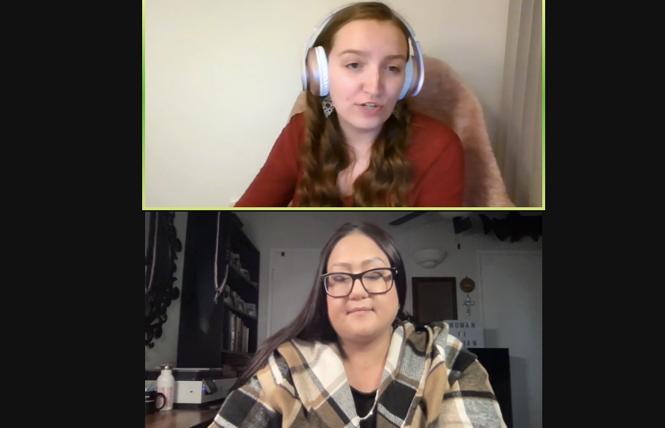 A small anti-trans group that joined a lawsuit challenging a California law that protects incarcerated trans people is a new nonprofit that united forces with four imprisoned cisgender women.

The Los Angeles-based group, Woman II Woman, is one of the parties behind a federal lawsuit seeking to declare gay state Senator Scott Wiener's Senate Bill 132 unconstitutional under both the state and federal constitutions. Members discussed their aims and reasons during a virtual event December 15. Woman II Woman is a nonprofit by formerly incarcerated women.

As the Bay Area Reporter previously reported, four women who are incarcerated filed the lawsuit in United States District Court for the Eastern District of California in Fresno against the California Department of Corrections and Rehabilitation November 17.

The text of the complaint has anti-transgender undercurrents as it refers to trans women as men.

SB 132 was signed into law by Governor Gavin Newsom in 2020 and went into effect in January 2021. Authored by Wiener (D-San Francisco), it allows incarcerated transgender people to ask for a transfer to a state prison or detention center that matches their gender identity. But as the B.A.R. reported in November, less than two-dozen such inmates had been transferred at that point out of the nearly three hundred who had requested to be moved.

The two listed attorneys on behalf of the women prisoners and Woman II Woman are Lauren Adams of the Women's Liberation Front and Candice Jackson of Freeman Mathis and Gary, LLP, a San Rafael-based firm.

One reason that the B.A.R. joined this Zoom meeting was to learn specifics about Woman II Woman, which does not have a publicly-available IRS Form 990, as most nonprofit organizations do.

Irvine stated that at least 70% of incarcerated women have experienced sexual or intimate partner violence at the hands of men.

"The women I work with were so abused and traumatized. They survived multiple rapes, multiple abusive relationships, and these were committed by men," Irvine said.

"Who needs a pimp when you have capitalism and patriarchy?" Irvine asked.

"We are talking about a group of people in this country who are the most traumatized people in all of American society: women in prison today," Irvine said.

This was the background reasoning for the suit, Adams explained.

"We are arguing there is no way for the state to implement this law as written without violating the constitutional rights of women in custody," Adams said.

According to the complaint, one of the plaintiffs claims that she was a victim of sexual assault "by a man transferred to her unit under SB 132."

"Most women in these prisons are very conditioned and brainwashed and think it's not worth asking for help," Ichikawa said. "If it wasn't for them ... it would probably continue until something horrible happens."

Attendees were told they could submit written questions. With a question about the stated rationale behind the suit answered, the B.A.R. wanted to ask Ichikawa when Woman II Woman was founded; why an IRS 990 form isn't available; if the nonprofit has a fiscal sponsor; where its funds come from; and if the B.A.R. can see its budget.

The B.A.R. was told via the Zoom chat feature that these questions would not be answered during the virtual event, but rather via a follow-up email.

The B.A.R. received the email December 23.

"Woman II Woman Inc. is a nonprofit public benefit corporation formed under the laws of the state of California effective March 9, 2021 (entity number C4718314)," Jackson of the Women's Liberation Front stated. "The organization is not yet required to have filed an IRS form 990, as it has not yet filed an IRS application for tax-exempt status. The organization is considering a variety of partnerships and sponsorship relationships but does not have a fiscal sponsor. The organization's incoming funds have thus far come from individual private donations. The organization will release budget projections and organizational information as required on a 990 form when such disclosures are due and appropriate."

Woman II Woman did not respond to a question about when financial disclosures would be available.

People who had had gender confirmation surgery were able to transfer "many years" before SB 132, Terry Thornton, a spokeswoman for the CDCR, stated at the time.

Critics speak out
Wiener told the B.A.R. in November that, "We passed SB 132 so that trans people who are incarcerated can be safer and can be who they are. SB 132 is about respecting the basic dignity and agency of trans people. The proponents of this lawsuit have a long history of attacking trans people — trying to erase them, denying their existence, and classifying them as scam artists and rapists."

Wiener was critical of the lawsuit.

Nora Huppert, a trans woman who is a staff attorney with the Lambda Legal Defense and Education Fund, said the legal group will be watching this lawsuit unfold.

"Lambda Legal was a member of the coalition of trans advocates that helped shape and advocate for SB 132, and we're well aware of WoLF's lawsuit," Huppert stated to the B.A.R. "WoLF seems hell-bent on painting trans women as predators, but that is a transparently bigoted farce, and trans advocates watching this issue know that the state needs to do more, not less, to protect incarcerated trans people. We are watching the situation closely and evaluating all legal avenues available."

Lisa Middleton, the first trans person elected in California to a non-judicial position when she won a seat on the Palm Springs City Council, is the current mayor of the desert city. She told the B.A.R. that while she's "not familiar with the lawsuit, I am somewhat familiar with SB 132."

"I think it was a really important piece of legislation," Middleton said. "Those who are incarcerated don't give up their humanity when they go to prison. Transgender people going into a general prison system are going to be subjected to horrific abuse, and the documentation of that abuse is considerable."

Depending on the outcome of the lawsuit, the issue of how to safely house incarcerated transgender people could come before Middleton if she is elected to the state Senate in 2024. She recently had to suspend her campaign for a state Senate seat because her district won't be up for election for another two years due to redistricting, as the B.A.R. reported December 22.

It had been expected to be up in 2022, which had led Middleton to announce her candidacy earlier last year. This week she pledged to run for the upper legislative chamber in 2024 while speaking to the B.A.R. for this story.