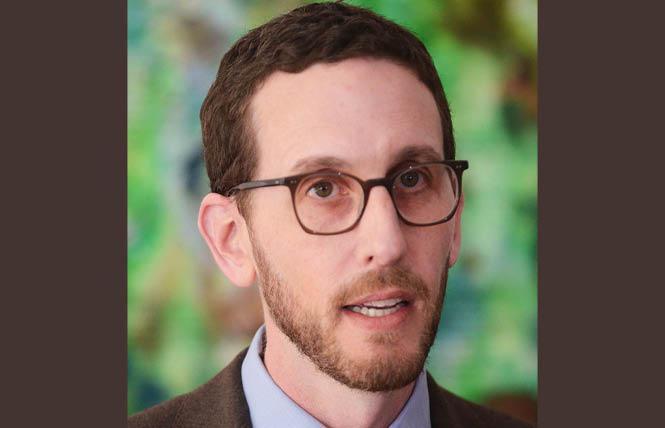 Gay state Senator Scott Wiener (D-San Francisco) told the Bay Area Reporter that his bill decriminalizing loitering for adults with the intent to engage in sex work will be heading to the desk of Governor Gavin Newsom "soon," but wouldn't give a date.

Though Senate Bill 357 was passed by the Legislature last year, it wasn't sent to the governor's desk right away. As the B.A.R. previously reported, Wiener stated in October that it'd be sent to Newsom in January.

Wiener reiterated that pledge to the B.A.R. January 7.

A law signed by then-Governor Jerry Brown in 2016 decriminalized loitering with the intent to engage in sex work for minors.

The bill was the topic of a January 3 article in the Los Angeles Times that stated it was held at the request of Newsom's office. The report said that advocates favoring sex work decriminalization on a more broad scale are in favor of SB 357 becoming law, arguing that doing so will keep sex workers out of the criminal justice system. Indeed, New York state repealed its loitering laws last February, as the B.A.R. previously reported.

On the other hand, those opposed to the bill argue that it will take away from police a tool that can be used to find sex trafficking pimps.

Celestina Pearl, outreach coordinator with St. James Infirmary, said that the San Francisco nonprofit that provides medical and social services to sex workers and their families is firmly in support. Indeed, St. James Infirmary was one of the co-sponsors of the legislation.

When asked about the sex trafficking argument, Pearl told the B.A.R. that "it isn't necessary to punish people in order to save them. ... I feel it's paternalistic and disrespectful to people to arrest them for their own good."

"It's important to make the distinction between those who are forced into sex work and those who choose it of their own free will," Pearl said, even for those who'd rather be doing something else. "In a capitalist society, there are plenty of retail workers, and it's not their dream job."

St. James provides referrals to services such as housing that Pearl said can help sex workers escape an abusive situation.

"I think housing is a big part of helping people," Pearl said. "I don't disagree with the L.A. Times article. [The reporter] was trying to show the balance of the issue, different perspectives on it. I get there are anti-trafficking advocates who are advocating for folks who have been through a bad situation, and have a perspective."

To get that side of the story the B.A.R. contacted former assistant United States Attorney Maggy Krell, who declined to comment for this report. Krell referred the B.A.R. to Vanessa Russell, the executive director of Love Never Fails, a Bay Area nonprofit that focuses on trafficking. Russell did not respond to multiple requests for comment.

Wiener, known for progressive proposals on issues of sex work and LGBTQ rights, has faced some pushback as of late. As the B.A.R. reported last week, a bill of his banning medically unnecessary surgeries on intersex children died in committee for the second time amid opposition from the California Medical Association. Wiener said that a proposed compromise would have gutted the legislation.

Wiener's bill — which became law — allowing incarcerated trans people to be housed in a prison fitting their gender identity, is the subject of a federal lawsuit. As the B.A.R. reported again this week, four incarcerated women and a new, small anti-trans nonprofit called Woman II Woman allege it violates several parts of the federal Constitution, including the 14th Amendment's equal protection clause.

Parts of another of Wiener's legislative accomplishments, the LGBTQ Senior Bill of Rights, are going to be reviewed by the California Supreme Court, as the B.A.R. reported in November. A three-judge panel of the state's 3rd District Court of Appeal in Sacramento came to a unanimous decision in July, in the case of Taking Offense v. California, that a requirement that employees at senior care facilities address residents by their preferred names and pronouns is unconstitutional under the First Amendment to the United States Constitution's protections of freedom of speech and the free exercise of religion.

California Attorney General Rob Bonta filed a petition of review with the state Supreme Court the following month to defend the law, and the San Francisco Board of Supervisors unanimously asked the high court to take up the case and reverse the lower court ruling.