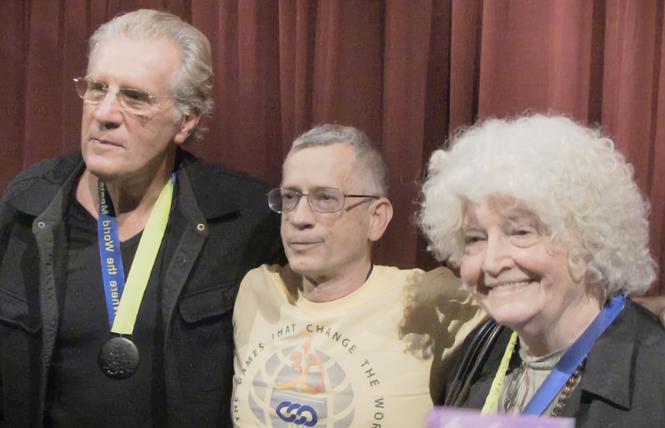 I wrote my first sports column for the Bay Area Reporter 15 years ago this week. I'd already had a pretty good career writing for daily newspapers, mostly in sports, and had covered major events all over the world, but realized I was now writing for readers to whom my name meant nothing. So I began that first essay with the words, "I'm Bart Simpson; who the hell are you?"

As I now write my final regularly scheduled column for you, I hope you have come to see me for the cheeky and combative columnist I have striven to be.

I am retiring as columnist for the B.A.R. Hell, I'm pretty much retiring from my entire 46-year professional journalism career and my 41 years in sports writing and editing.

I've survived some serious life-threatening renal and cardiac issues throughout my tenure at the B.A.R., and in more recent years arthritic hands, riddled with bone chips, have made note-taking during interviews more painful and problematic. Comes a point when it is obvious it is healthier both for me and the future sports coverage of the paper to step aside and let others take the lead.

How did I come to be the B.A.R. sports columnist, and what led me to become involved in the inclusive world of LGBTQ-centric recreational sports? Glad you asked.

My favorite Shakespeare quote comes from his play, "As You Like It": "Sweet are the uses of adversity, which, like the toad, ugly and venomous, wears yet a precious jewel in his head; and this our life, exempt from public haunt, finds tongues in trees, books in the running brooks, sermons in stones, and good in every thing."

I was infected with HIV sometime around 1982 before I had ever heard of the concept of "safe sex." I met the clinical criteria for AIDS before the end of that decade. By the mid-1990s I had had almost every opportunistic infection except dementia and pneumocystis. Going blind and covered with lesions, I was placed on a six-month death watch ... for 30 months.

The advent of the "AIDS cocktails" averted my death but triggered an unending series of health challenges related to the toxicity of the medications that were keeping me alive. As I regained weight and strength and my spirits revived, those continuing health challenges led me to discover the inclusive world of queer-centric sports.

I joined Golden Gate Wrestling Club in 2003 not because I was gay, but because it was the only legitimate wrestling club I could find that had the patience and desire to work with a 50-year-old wrestler with artificial hips.

That in turn led me to Team San Francisco and the Federation of Gay Games. I was so grateful for the opportunities they afforded me that I devoted a great block of my time to volunteering for both of those organizations. Connections from that involvement led to my signing on to write about sports for the B.A.R. It was, essentially, one more way for me to give back to my supportive community.

My recollection of the years opining for the B.A.R. stir up memories loaded with joy, sadness, anger, humor, and passion. Defining themes that have unfolded in my tenure have been the struggles of the Gay Games to maintain identity and mission while facing massive internal and external challenges; the growing threat the legitimate anti-testosterone movement in sports unintentionally or intentionally posed to HIV-positive athletes first and more recently to transgender and intersex athletes; the efforts and shortcomings of athletic institutions to obliterate their institutionalized culture of racism, sexism, homophobia, and transphobia; and the continued failure of sports organizations and administrators to adequately protect the health and safety of the athletes at all levels upon whom their fortunes and notoriety depend.

I love sports but have to admit my adrenaline rushed most when I took zingers at what I saw as injustice or incompetence.

As in late 2017, when I penned my obituary on the World Outgames after the Miami event was canceled the day of opening ceremonies. I wrote:

"The World Outgames were a nihilistic golem haunting LGBT participatory sports since 2004. They were invented by a handful of jilted organizers in Montreal who, in 2003, had walked away from negotiations to host the 2006 Gay Games, chafing at the requirements demanded of a Gay Games host, and deciding to create their own beast to usurp the Gay Games they had come to loathe. They sculpted their invention from the mud of their own disdain. They created an event that would not be accountable to anyone."

I referred to professional and college football as the "bloated pigskin of excess." I called the international track rule that essentially banned intersex women "elitist crap."

Of efforts to rid pro sports of homophobia, I wrote, "Bigotry, whether over race or orientation, occurs not on a once-a-year basis but minute by minute throughout the days. Like a mushroom, bigotry feeds in darkness on crap. It must be exterminated not by the occasional glare of the media spotlight on a single athlete coming out after the fact, but by the brightness of articulated enlightenment and an absolute intolerance for intolerance the instant it is uttered."

On steroids in sports: "The reality is these substances were created in medical laboratories, financed by hopes to save lives. It is not medicine that creates monsters, but its misuse."

On the Virginia Tech massacre in 2007 and the value of sports participation: "Homeland security be damned — none of us ever was safe in this world and none of us ever will be. None of us can ever be sure of what ultimate test we shall be faced with — it may be a deranged student, it may be a terrorist, it may be a virus — but we can be damned sure we will be tested. And sports is as good a way as any to develop grace under fire."

I think that last quote captures as well as any why I love sports, why I think sports are important, and why I am passionate about articulating the value of sports. My life writing and competing in sports has been spent cavorting with Shakespeare's toads, fighting through the onslaught of trials to find voices, lessons, goodness and strength at every turn.

I tell the athletes I coach that the road to success is cobblestoned with failure. They come to embrace that (once they've Googled the word "cobblestoned"). I hope in some ways, at some times, I have helped my readers and fellow survivors to embrace it as well.

Although I am stepping back from sports writing, I hope to take on freelance writing projects now and then and am working on a few book-writing projects, including a heavy revision and expansion of my cookbook.

I want to thank my editors — Cynthia Laird, Matthew S. Bajko, and John Ferrannini — for their editorial support and relentlessness in rooting out my typographical errors, especially those created by the parade of cats who like to walk on my keyboard while I am working.

I'd also like to thank all of the coaches, organizers, athletes, and activists who have taken the time to talk with me and to share their insights and passions. I'd like to thank my ever-loving husband, Eduardo, who always encouraged me to keep wrestling, keep coaching, and keep writing. And thank you, loyal readers, for sticking with me, re-posting my stories, and generally putting up with my dubious wit.

Jock Talk: Sports events that happened (and didn't) in 2021