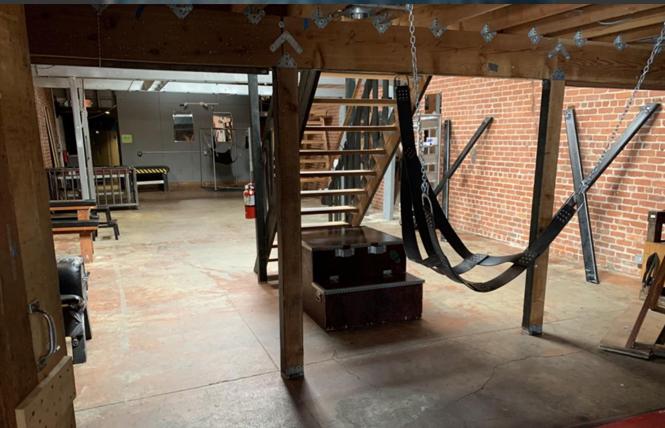 While one potential gay bathhouse proprietor has decided against pursuing the business, kink and other sex venues in San Francisco are planned or being considered.

One of those is the sex-positive kink space at 1060 Folsom Street in the South of Market neighborhood, which recently got new owners who have signed a lease on the space.

The moves regarding gay bathhouses are coming about as it's anticipated the Board of Supervisors will approve a change to the zoning for such spaces so that the businesses can be considered in all parts of the city.

The queer man who was the first to inquire with gay District 8 Supervisor Rafael Mandelman about the prospect of opening a gay bathhouse has changed his mind.

"I just wasn't comfortable being the first one to do it because there's so many nuances that'll happen with the city, and that makes things a lot more expensive than if you do it later on," Jack Komar told the Bay Area Reporter shortly before the new year.

Komar said he's moving to Florida, where he may open a bathhouse in the Sunshine State after he "does more research about it."

"It's a whole different state: different policies, laws," Komar said. "But we are looking into it."

Curtis Chude, a gay would-be bathhouse proprietor, has also been in touch with Mandelman's office. He shared his bathhouse concept with the B.A.R. in November, saying it could work at the old 24 Hour Fitness location on Market Street, the Embarcadero's Pier 1, or a warehouse site. He reiterated his interest to the B.A.R. January 4.

"I'm noticing this is going to be a longer process than what I'd anticipated, but I'm still pursuing it," Chude said.

In the November story, Mandelman aide Jacob Bintliff, a gay man, told the B.A.R. that the supervisor would seek to introduce legislation to open up zoning for bathhouses by the end of 2021. That didn't happen — but Bintliff updated the B.A.R. that it'll be happening in January.

Currently, gay bathhouses are prohibited in much of the city. While Mandelman spearheaded successful legislation last year to allow them in the city again after they'd been closed in 1984 to prevent the spread of the AIDS epidemic, the planning code — which defines them as "adult businesses" — only allows them to open without conditions in the Civic Center area, the Financial District, along most of the waterfront, and in parts of the Mission, Dogpatch, and Bayview neighborhoods. They are permitted conditionally in other areas as well, such as on Market Street from Church Street to Van Ness Avenue.

According to Bintliff and Daniel A. Sider, chief of staff of the planning department, Mandelman's new legislation will seek to divorce bathhouses from adult businesses to form a new category.

"Our proposal all along has been to create an 'Adult Sex Venue' definition in the planning [code] and to allow it in Castro/Upper Market, SOMA, and other areas," Bintliff stated.

Bintliff stated January 4 that the proposed legislation is currently being finalized with the city attorney's office before it's introduced.

Meanwhile, the Castro has been left without an adult sex venue of any kind for the first time in three decades, with the December 15 closure of Eros at 2051 Market Street, between Church and Dolores streets. Eros co-owner Ken Rowe confirmed to the B.A.R. in November that the sex club will reopen in the Tenderloin's Transgender District after being asked about reports the new location will be on Turk Street.

Rowe stated January 4 that Eros is looking at an opening date in "mid-March or April."

SOMA kink venue gets new owners
Meanwhile, 1060 Folsom Street, also in SOMA, plays host to special events such as San Francisco CumUnion. The space, previously known as Alchemy or SF Catalyst, has been an event space for a number of sex-positive groups over the years, and it was announced January 1 that the public benefit corporation Transform1060 Inc. has signed a new lease for it, taking over from the San Francisco Bay Area Leather Alliance, which accrued almost $70,000 in rent debt due to the COVID pandemic.

"To mark the new ownership, the venue has been renamed 'Transform1060,'" a news release states. "The name is a nod to both the previous names ('Alchemy' and 'SF Catalyst'), which evoked change and transformation, and to the ownership transition process. While the ownership transfer is still being finalized between the two organizations, the lease represents significant progress in that process."

"This new lease ensures that kinky folks from all of our communities will continue to have a safe space in SF to gather, play, teach, and learn," Christopher Wood of Transform1060 stated.