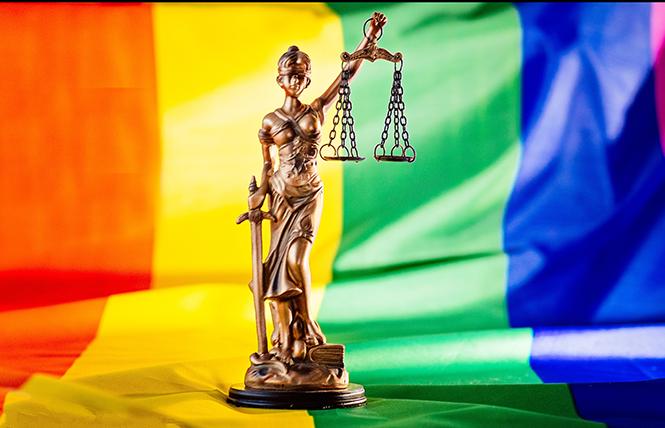 LGBTQ people around the world had reason to celebrate victories and protest defeats during 2021. Photo: Courtesy AdobeStock/Daniel Jedzura

The year started out on a hopeful note. The world was looking forward to getting past a dark period in America's leadership and the global COVID-19 pandemic. President Joe Biden's administration and the rollout of vaccines brought some optimism to LGBTQ people globally.

However, conservatives and progressives continued their fights over LGBTQ rights. There were victories but violence against LGBTQs in Afghanistan, Ghana, Hungary, Myanmar, Poland, and Uganda dominated the headlines.

Queer people were on the frontline protesting against Myanmar's military coup in February, with many dying when the military violently shot demonstrators on the streets. In August, LGBTQ Afghans were left behind Taliban and ISIS-K (an Islamic State-affiliated group active in central Asia) lines after the United States and its allies rapidly withdrew from the country.

LGBTQ refugees were constantly attacked at Kenya's infamous Kakuma Refugee Camp, leading to the death of Ugandan gay refugee activist Chriton "Trinidad" Atuhwera in April. In the fall, a groundbreaking report about LGBTQ life at the camp was published by the Organization for Refuge, Asylum, and Migration and Rainbow Railroad.

Violence in Iran continued as reports of executions and honor killings of LGBTQs surfaced from inside the country. Reuters reported the country's queer community expressed no hope under President Ebrahim Raisi's new regime.

Hungary and Poland continued to follow Russia's lead by ignoring European Union, German and French sanctions and legal pressures to abide by human rights standards as the countries continued to oppress LGBTQ citizens. Hungary pushed its anti-propaganda law banning queer books and films for minors while Poland considered a similar law. Russia caught and returned Chechen gay brothers Salekh Magamadov and Ismail Isaev to the country to face persecution and a trial. The country also opened its trial against feminist and LGBTQ activist and artist Yulia Tsvetkova in April. Tsvetkova is charged with alleged pornography and violating the anti-gay propaganda law for distributing her drawings celebrating female bodies. Tsvetkova and the brothers launched hunger strikes protesting Russia.

The European Court of Human Rights ordered Russia to recognize same-sex relationships and transgender parents in two separate court rulings. Additionally, Germany charged five of Chechnya's top leaders with torture for their roles in state-sanctioned "gay purge" that was revealed in 2017.

Russia's response to Europe's pushback was to officially shut down LGBTQ organizations, labeling them as "foreign agents." Russian President Vladimir Putin denied the existence of transgender and gender-variant Russians and banned same-sex marriage at the end of 2021.

OutRight Action International, a global LGBTQ advocacy organization, highlighted the online silencing of queer voices in "No Access: LGBTIQ Website Censorship in Six Countries." The report was published in partnership with the University of Toronto's Citizen Lab and the Open Observatory of Network Interference in September.

At the beginning of the year, the governments of Cameroon, Ghana, Indonesia, Malaysia, Turkey, Tunisia, and Uganda used less high-tech methods to attack the LGBTQ community.

Ghanian police raided the country's first and only LGBTQ center in its capital city, Accra, sending its leaders and queer community members into hiding. Police raided alleged queer parties and an LGBTQ activist training. Then eight members of parliament proposed a draconian anti-LGBTQ bill in July, which is making its way through Ghana's parliament.

Trans killings continue
Countries' attacks on LGBTQ citizens were on the rise this year, fueling hate crimes against LGBTQ people. It was another record-breaking year with 375 recorded transgender killings globally.

Italy and South Korea failed to pass anti-discrimination laws to protect LGBTQ citizens. Italy faced large protests on both sides of the issue criticizing the government. South Korean legislators were criticized for not passing a landmark anti-discrimination act introduced by Park Joo-min, a legislator of the Ruling Democratic Party of Korea. The law would have included protections based on sexual orientation and gender identity.

Human rights activists raised alarms about the rise of anti-LGBTQ hate in Eastern Europe as a conservative wave spread across the region coinciding with a rise in anti-LGBTQ sentiments, such as in Latvia. Activists pointed out Latvia was experiencing a rise in nationalism and homophobia.

Progress
Marriage equality and recognition of same-sex couples' relationships continued to march down aisles around the world. Same-sex families made major legal advancements. Bans against conversion therapy made big strides and decriminalization began to make moves. Transgender rights made some significant gains with some countries recognizing the need to simplify gender change laws.

Chile and Switzerland ushered in same-sex marriage as well as Mexico's Yucatan and Sonora states.

Indian couples continued to wait for a decision from the country's supreme court, but that didn't stop same-sex couples from saying "I do" throughout the year, legal or not.

Marriage cases in the Caribbean were stalled. Bermuda and Cayman Islands' same-sex marriage cases went to the Privy Court in the United Kingdom, but there was no ruling before the year was out. Jamacia's supreme court delayed gay activist Maurice Tomlinson's same-sex marriage and decriminalization cases against the island nation.

The Czech Republic's same-sex marriage bill moved one step forward after years of being stalled in parliament.

Montenegro legalized same-sex civil partnerships in July. At the same time, same-sex partners' love was denied in Bolivia and Thailand.

The United Nations spoke out against criminalizing same-sex unions in July, stating it was a violation of human rights. In September, a change in Cuba's family code opened the door to same-sex marriage in the country.

Rainbow families
Same-sex families had major legal wins in Europe and the U.S., yet there were some setbacks in other countries.

In Europe, big wins allowed same-sex parents to confer their citizenship to their children. Courts in France and Israel granted the use of reproductive technologies for lesbian and gay couples to create their families using IVF and surrogacy, respectively.

Yet, there were some setbacks in Europe and Africa. Separate court rulings in the Czech Republic closed all registered same-sex couples' adoptions both domestic and foreign. A Namibian court ruled against a gay couple in their fight to take their newborn daughters home.

Criminal cases
Convictions were obtained in the 2016 killings of Bangladeshi gay activists Xulhaz Mannan, 35, and Mahbub Rabby Tonoy, 26. In September, six of eight men were sentenced to death for the murders.

Political strides and losses
This year saw the U.S. reposition itself as an LGBTQ leader. Biden put LGBTQ rights at the forefront of U.S. foreign policy, though the administration has come up short in some areas, such as assistance in relocating LGBTQ Afghans.

Some members of Congress and LGBTQ rights activists were angered that the U.S. left so many queer Afghan refugees behind at the mercy of the Taliban after its chaotic withdrawal from Afghanistan and no pledge or plan to get them out. In August, Secretary of State Antony Blinken was questioned by gay Congressmember Chris Pappas (D-New Hampshire) and 64 members of Congress in a letter about prioritizing the evacuation of LGBTQ Afghans. The letter followed a similar letter sent by Senator Amy Klobuchar (D-Minnesota) and 12 Democratic Senate colleagues questioning the State Department's protection of LGBTQ asylum seekers earlier in the month.

A coalition of LGBTQ organizations working on queer global rights submitted a 10-point action plan to evacuate and resettle LGBTQ Afghans to Biden.

Canada was the only country to publicly announce it would help evacuate and resettle LGBTQ Afghan refugees.

Queer activists criticized Biden, first for not appointing any openly LGBTQ ambassadors then for a lack of diversity among LGBTQ diplomats — there were no women or people of color.

Senators Jeanne Shaheen (D-New Hampshire) and Lisa Murkowski (R-Alaska) reintroduced the Global Respect Act to Congress in July. According to a summary, the bill imposes visa-blocking sanctions on foreign persons responsible for or complicit in violating the human rights of individuals due to actual or perceived sexual orientation, gender identity, or sex characteristics.

Despite criticism, LGBTQ activists began seeing symbolic and concrete changes by the end of the year. The White House and State Department's momentum putting LGBTQ rights at the forefront of foreign policy began to become visible. Biden put anti-LGBTQ nations on notice at the U.N. General Assembly meeting in September.

Before the year was out, Christopher John Lamora, a gay man and career Foreign Service officer, was nominated as ambassador to Cameroon, one of Africa's anti-LGBTQ hot spots. USAID appointed Jay Gilliam, a gay man, to lead the agency's efforts to promote LGBTQ rights around the world. Gilliam was formerly director of the Human Rights Campaign's global program.

Greece appointed its first openly gay minister Nicholas Yatromanolakis as deputy minister for Issues of Contemporary Culture in January. In November, Honduras elected Víctor Grajeda, a gay man, to Congress, a first for the country.

Guatemala's Sandra Moran and Peru's Susel Paredes were ushered in as the countries' first out lesbian members of congress. Moran became Guatemala's second out member of congress after gay Congressman Aldo Davila, who is the country's first out politician.

Out in the World: Wedding bells will ring in Switzerland next summer
Sign up!