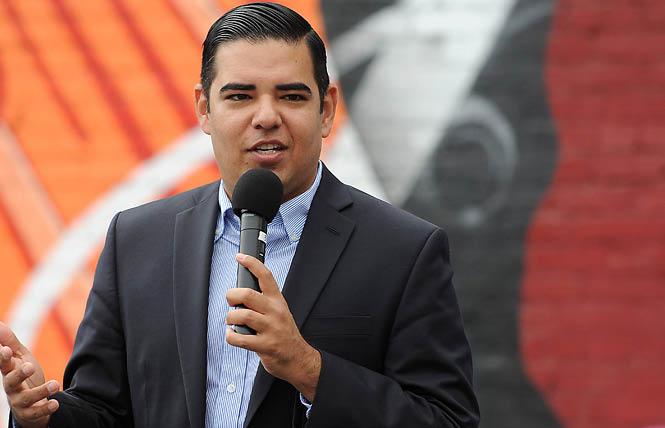 Robert Garcia, who has led the Southern California city of Long Beach as its first openly gay and first Latino mayor since 2014, is running for an open House seat. He is the fourth out man, and the third of color, to launch a 2022 congressional bid in the Golden State.

As soon as Congressman Alan Lowenthal (D-Long Beach), a former Long Beach city councilmember and state senator, announced his retirement December 16, speculation immediately turned to Garcia seeking to succeed him. As the Bay Area Reporter noted in 2019, the rising Democratic politician was already being talked about as a possible House contender due to his ruling out running for a state legislative seat.

Garcia, who was born in Lima, Peru, was said to have been interested in the congressional seat back in 2011, when Lowenthal first ran for it. Just two years prior Garcia had won a Long Beach City Council seat in a special election.

Over the last two years Garcia's profile on the national stage has continued to grow, first backing Vice President Kamala Harris' run for the White House then serving as a strong surrogate for President Joe Biden during last year's presidential race. He was a vocal defender of Governor Gavin Newsom during this summer's gubernatorial recall election.

He gained national attention again for being at the forefront of fighting the COVID-19 pandemic in his city, having lost both his mother and stepfather last year to the coronavirus. And he has been at the forefront of media coverage this year as he works with Port of Long Beach officials to deal with a backup in unloading shipping vessels that has wreaked havoc on the nation's supply chains.

Friday morning Garcia made his House bid official, releasing a video about his candidacy. In a post on Twitter Garcia nonchalantly started off by writing, "Hey everyone, I'm running for Congress."

He noted that his "mom brought me to this country when I was 5. She risked everything so that I could succeed. Every single kid deserves the same shot that this country has given me."

Hey everyone, I'm running for Congress.

My mom brought me to this country when I was 5. She risked everything so that I could succeed. Every single kid deserves the same shot that this country has given me.

The nearly 2:50-minute video honors his mother and features Garcia giving his husband, Matthew Mendez, a kiss on the cheek. He says his is "an American story."

"My mom is with me everywhere I go. Her determination, her passion, her dedication to family and the community," says Garcia, adding, "She didn't just accept me for who I am, she made me who I am today."

Bowing out from seeking the seat was state Senator Lena Gonzalez (D-Long Beach), who endorsed Garcia Friday. Announcing her support of his candidacy via a tweet, she wrote, "I know he will be a strong voice for all in our nation's Capitol as we face even more policy challenges ahead ... keep fighting Robert!"

Mayor @RobertGarcia led Long Beach through the toughest of times during this crisis. He's now running for Congress!

I know he will be a strong voice for all in our nation's Capitol as we face even more policy challenges ahead..keep fighting Robert!

Equality California, the statewide LGBTQ advocacy organization, and the LGBTQ Victory Fund, which helps to elect out candidates across the country, both also immediately endorsed the out politician joining the LGBTQ caucus in Congress. There are currently 11 LGBTQ congressional members.

"Mayor Garcia has shown throughout his nearly 13 years in elected office that he has the skill, tenacity and compassion to improve the lives of LGBTQ+ people and the diverse communities to which we belong," stated EQCA Executive Director Tony Hoang. "From creating one of the country's most comprehensive responses to the COVID-19 pandemic to establishing transgender-inclusive healthcare coverage in the City of Long Beach, he has been there for our LGBTQ+ community and for all Californians. We need a leader like him in Congress, and we're prepared to do everything in our power to ensure he is elected in 2022."

Victory Fund President & CEO Annise Parker, who served as mayor of Houston, noted that "big-city mayors make excellent members of Congress because of the scope of their knowledge and experience and their focus on practical governing over excuses and scapegoating. Mayor Garcia went to Long Beach to get things done — and he has — including making the city a national role model for its response to the pandemic and vaccine distribution strategy."

She added "his competence is only matched by the heart he brings to governing — using his experiences as an LGBTQ immigrant who lost parents to COVID to inform his policymaking and governing. Mayor Garcia is the type of leader Washington, D.C. desperately needs and voters are ready to send him there."

In addition to Garcia, gay veteran Joseph C. Rocha is also seeking to be one of the first out Latino members of Congress from the Golden State. The Democrat is aiming to oust Republican Congressmember Darrell Issa from his suburban 50th Congressional District seat northeast of San Diego.

Will Rollins, a gay former federal prosecutor, is one of several Democrats planning to run next year against conservative Congressmember Ken Calvert (R-Corona) in California's 42nd Congressional District. Rollins lives in Canyon Lake with his partner.

Gay Japanese American Congressmember Mark Takano (D-Riverside) is seeking reelection next year. He became the first LGBTQ congressional member from the Golden State in 2012 and the first gay person of color ever elected to Congress.

To date, there have only been two LGBTQ people elected to Congress from California. As the B.A.R. reported this week, a pair of Democratic House candidates with Bay Area ties is aiming to become the first out members of Congress elected from Oregon in 2022.

Jamie McLeod-Skinner, 54, is making her second bid for Congress, this time in the Beaver State's newly drawn 5th congressional district against Congressmember Kurt Schrader (D-Canby). She was the first lesbian elected to the city council in Santa Clara, California, in 2004 and served on it for eight years.

Kevin Easton is the first openly gay man to run for Congress in Oregon. The onetime San Francisco resident has worked on a number of political campaigns and for elected leaders, including former San Francisco city attorney Dennis Herrera. He is running in the state's newly added 6th Congressional District, which it gained due to the decennial census count.