Two out women to lead BART board 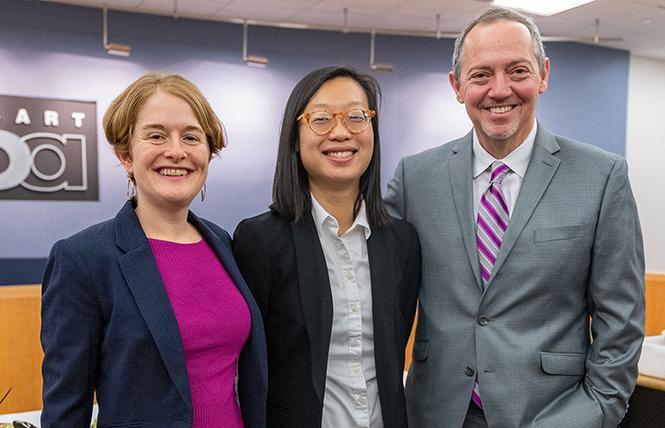 The Bay Area Rapid Transit District board will be led for the first time by two out women, directors decided at their December 16 meeting.

The new positions are technically effective immediately, though Saltzman said there won't be a BART board meeting until January 13, as Thursday's was the last of the year.

Saltzman, 39, told the Bay Area Reporter that she's excited to be stepping into the role as board president, which she also served as in 2017.

"It's awesome," she said in a phone interview. "It's great to build our LGBTQ caucus."

"Incredibly proud that two of BART's most accomplished and talented members are also making queer history with their leadership of BART in 2022," Dufty wrote in a text to the B.A.R.

Li, 34, also talked about the historic nature of the BART board leadership, noting that she's the first queer woman of color and the first Asian American woman on the board. She's also the only Asian elected to a transit board in the country.

"When Bevan was president, he really uplifted the queer community," Li said in a phone interview, referring to Dufty's board presidency in 2019. "Representation matters. But we really care about transit and moving our riders."

In fact, Saltzman and Li both pointed to increasing BART ridership as the top priority. In the nearly two years since the COVID-19 pandemic began, BART saw its passenger numbers plummet and the board had to take the drastic action of reducing service for most of 2020. In August, as more people got vaccinated, BART was able to restore the frequency of trains to near pre-pandemic levels, particularly on weekdays, as the B.A.R. reported.

"Ridership is trending. It's slow and steady growth," Saltzman said, adding that during the board's budget process in June, it was thought that ridership would come back more quickly. But many offices in the Bay Area remain closed as employees continue to work remotely. In other cases, people have returned to their vehicles instead of public transit, leading to traffic congestion on bridges and freeways.

It was great to see so many folks on my BART rides yesterday, and I look forward to riding again today. pic.twitter.com/pd2Xdiw0x1— Rebecca Saltzman (@RebeccaForBART) December 9, 2021


But Sundays still lag with trains running only every 30 minutes and service ending at 9 p.m. Saltzman said that would be addressed soon.

"There will be a big service increase in February that will focus on Sundays," she said. "It's going to get a lot better."

Those include the return of midnight closure and running five-line service.

"We need to get more and more to the point where our weekend service gets closer to our weekday service, as it is our greatest area of growth," she stated in a news release.

Li noted that in addition to the expected service changes, she hopes to see some creative ideas to improve ridership.

Saltzman also said riders can look forward to the reopening of underground restrooms at Powell Street station in San Francisco and the 19th Street station in Oakland in 2022. She said BART is committed to reopening restrooms in all underground stations, which have been closed since shortly after the 9/11 terrorist attacks because of a recommendation from homeland security officials.

Another priority of Li's is public safety, especially for the LGBTQ and Asian and Pacific Islander communities. She noted the violent incidents in which API people were targets, and the biases against APIs that emerged after former President Donald Trump used racist language when talking about the coronavirus. Li praised BART's ambassador program and the progressive policing bureau within BART's police department.

The agency's ambassador program started in 2020. The ambassadors, who are in uniform but unarmed, help people on BART trains and work to connect those in crisis with services. During the pandemic, they have distributed face masks, as those are required on BART and other public transit, according to BART. The ambassador program marked its first anniversary in February. It's part of a larger shift within BART Police to find new ways to respond to things such as mental health emergencies.

Li, who used to be advocacy director for the San Francisco Bicycle Coalition, will start a new job January 4 as director of the Coalition for Community Safety and Justice. She will lead the coalition's programs and AAPI community-based safety initiatives. CCSJ partners with Chinese for Affirmative Action, Chinatown Community Development Center, Chinese Progressive Association, and Community Youth Center.

BART to turn 50
Saltzman will also lead the BART board as the agency celebrates 50 years in 2022. She said the agency is still in the early planning stages but hopes to have "a lot of fun things."

"We will have a great opportunity for a positive focus," she said, especially after the last two pandemic years that have been hard on everyone, including BART workers.

Saltzman said BART will also continue to focus on building housing on its properties, with a focus on affordable housing. BART has a goal of 20,000 units by 2040, so that will also remain a priority, she said.

Li last month took part in the groundbreaking ceremony for 131 new units of 100 percent affordable housing being built in the upper yard at the transit agency's Balboa BART Station in San Francisco, which it shares with the city's Muni subway service.

Writing in a tweet, Li noted she "finally got to check 'golden shovel pageantry' off my bucket list," adding, "still waiting on a chance to hold some big boy scissors at a ribbon cutting."

finally got to check "golden shovel pageantry" off my bucket list

In terms of the San Jose BART extension, Saltzman said the board should know more next year. The Santa Clara Valley Transportation Authority is building the project to BART standards, then BART will operate it. Saltzman said VTA has gone out with a few of its contracts for the project and will get results next year. In the meantime, new technology that would see a single-bore tunnel is planned, though Saltzman said there are some unknowns.

"They've had peer-reviews that said it could be done, but it's a construction type we haven't done so there are unknowns," she said, adding that the BART board is "very engaged" in the project.