SF tenants deliver 'coal' to landlords suing to evict them 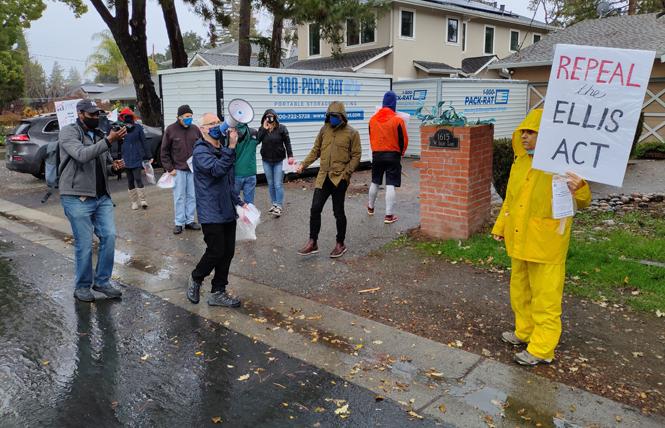 Several tenants of a building in San Francisco went to the Redwood City homes of two of their landlords December 12 protesting their Ellis Act evictions. Photo: Courtesy Paul Mooney

A group of opponents to an eviction at an apartment building in San Francisco went to the Redwood City homes of two owners to deliver them lumps of coal December 12.

"It was symbolic," said Paul Mooney, a gay 51-year-old resident of a majority-LGBTQ apartment building next to Mission Dolores Park, who said he bought the holiday gift himself. "Eviction is hard enough to go through, but having it during the holidays made me think about what that meant, so I thought it was a symbolic gesture about how we felt about the situation."

As the Bay Area Reporter previously reported, the building at 3661 19th Street is a 12-unit, rent-controlled complex that was bought by two limited liability corporations in August 2018: 3661 19th Street LLC (two-thirds) and VR Investments LLC (one-third). These, in turn, are owned by a group of trusts. The trustees of the former are Jeff Pollack, Edith Wong, and Pierre and Tracy Malak, and the trustee of the latter is Ryan C. Fong.

Shortly after the purchase — in spite of alleged assurances from a prior owner — the LLCs began efforts to evict the tenants through the Ellis Act.

Mooney was served with his eviction notice during a November 15 protest at the site. But he soon realized "it feels weird to be protesting outside your own home," and decided he wanted to take the cause to the neighborhoods of Pollack and Fong, who live on the Peninsula in Redwood City.

"We wanted to go to their neighborhoods and say, please stop evicting us," Mooney said.

Accordingly, 11 people "braved the rain and set out in a caravan," according to Mooney.

"We delivered stockings full of coal to their doors, with a card asking them to please not evict their tenants. We rallied in front of their houses, chanting 'Ho Ho Ho! We Won't Go!' and 'All we want for Christmas is to stay in our homes!' then spread out to knock on doors and talk to their neighbors," Mooney stated. "We encouraged everyone we spoke with to please talk to the owners. ... We weren't sure what to expect, because Redwood City isn't San Francisco — but the response was overwhelmingly positive. We hope that hearing from their neighbors will encourage them to have a change of heart, and let us stay in the homes that we have known for so long."

Mooney said that Pollack and Fong "did not come out or appear to be home. I don't know if they were there."

The group stayed about 10 minutes at each house. Mooney isn't sure how many neighbors were contacted, but said that some did agree to speak with Pollack and Fong, who did not return requests for comment for this report.

Steve Collier, a gay man who is an attorney with the Tenderloin Housing Clinic, is representing the tenants. He said the case is in litigation.

"It's still pending," Collier said. "Some tenants have been served. We filed a motion and the first group is scheduled to be heard but it may be postponed. For another unit, we have a motion to quash because they were improperly served."

Collier wasn't at the recent protest.

Mooney is no stranger to protests. Longtime B.A.R. readers may remember Mooney as the spokesman for the community group And Castro For All, which was responsible for the boycott of gay landlord and bar owner Les Natali's Badlands after allegations that he discriminated against Black people seeking to patronize the establishment. A 2004 report by the San Francisco Human Rights Commission found that Badlands was discriminating against African Americans, but the findings were never official because the HRC executive director at the time did not sign off on the staff report. Natali and the complainants eventually reached a confidential settlement. Badlands closed in 2020, though a new bar is slated to open at its location.