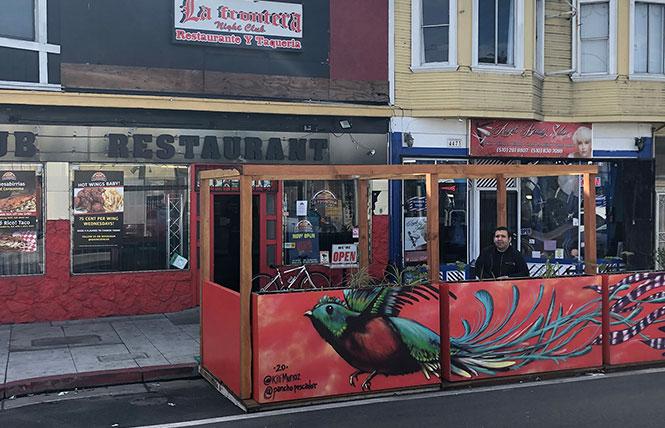 Carrillo, a gay man well known in the East Bay's nightlife community, decided to completely close the restaurant for two weeks. He was concerned remaining open would put his staff at risk, especially the older women working for him. As it became clear the health crisis would not subside anytime soon, he held a meeting with his employees to decide what to do.

Someone during the closure had broken through the backdoor of the restaurant in an attempt to steal the cash register, which was empty. Other than damaging the entryway, the burglar(s) didn't make off with any equipment, said Carrillo.

The uncertainty of what else could happen to the darkened restaurant at 4481 International Boulevard led Carrillo and his staff to decide it would be better to have the eatery open for business. Several of the staff did become sick with COVID last spring, as did Carrillo in May, but all had fairly mild cases and recovered, Carrillo recalled in a recent interview with the Bay Area Reporter.

A month into being reopened, Carrillo wasn't sure La Frontera would survive. Yet the eatery soon found its footing, and ever since, sales have climbed each month between 15 and 20%, he said.

The turnaround had to do with a number of factors, suspects Carrillo, a constant promoter of the restaurant on social media who has built up the eatery's email list to more than 4,000 subscribers. He uses it to promote various weekly and daily specials on offer at La Frontera.

A runaway success has been the weekly Wednesday hot wings special. The wings, which can be ordered in nine different flavors, cost just $.75 each those nights when bought in multiples of 10.

"The hot wings sell out. I had to buy a big freezer just for the wings," said Carrillo, who serves up at least 4,500 wings in a week. "There aren't a lot of hot wings in this area. They are kind of hard to find."

Carrillo also happened to feature the latest taco craze in the Bay Area when he opened: quesabirrias. Another food item hard to find in his area of Oakland, the tacos are fried and feature a beef stew covered in melted cheese. A consommé broth can be ordered to either dip the tacos into or sip as a kind of soup.

"Not a lot of restaurants are doing it," said Carrillo, noting that almost every order includes a quesabirria, such that walk-in customers are warned it can take upward of 20 minutes to make them due to their popularity.

He lucked out in interviewing a cook that knew how to make them.

"I had not had one until a week before we opened," acknowledged Carrillo, who happened to come across mention of the special taco on Instagram as he was trying to determine how his restaurant could stand out.

La Frontera opened a year ago on February 8 and is celebrating its anniversary through this Sunday, February 14. As Carrillo plugged in one of his emails sent out Monday, he is offering a buy one, get one free quesabirria offer all week for walk-in customers, while all online orders will receive a free gift.

"Not many restaurants have been able to thrive as we have during this pandemic and we are blessed to have you as a customer and thank you for your support as we have grown so fast over the past year. We started with nine employees and now are at 22 and growing," wrote Carrillo.

The restaurant is situated at the corner of International Boulevard and 45th Avenue, directly in front of the High Street rapid bus line stop. An old vertical neon sign for a former occupant of the space, Talk of the Town Taqueria, continues to hang from the facade.

The red and green color scheme of the signage has been incorporated into the design of the restaurant's street parklet, built by volunteer students out of wood that downtown Oakland businesses had used to board up their windows during last year's various protests in support of Black Lives Matter. There are four tables and five stools in front of a ledge counter for customers to sit and enjoy their food.

Planters add a garden touch, while the bus stop-facing side of the structure sports two murals. One is of a Resplendent quetzal, a symbol of Guatemala, as that area of Oakland has a large Guatemalan population, while the other is inspired by Aztec culture.

(In a bit of history repeating itself, the outdoor eating area was completed just as Governor Gavin Newsom put the entire state on lockdown in early December. So the first time patrons could use the parklet was last month.)

Starting this weekend the eatery's backyard patio will be open Fridays, Saturdays, and Sundays from 8 p.m. to 2 a.m. And as soon as he can hire on extra staff, Carrillo plans to soon launch the long-delayed drag brunches on Sundays.

A nightclub of his own
Carrillo, who is in his late 30s, grew up in Sacramento and moved to the Bay Area in 2003. He had worked for the Diocese of Oakland for 10 years overseeing its multimedia for the Catholic Church in the East Bay but was laid off last April.

Under the persona of Valentino Presents, Carrillo has managed DJs, drag performers, go-go dancers, and other nightlife entertainment for 15 years. He also hosts dance parties at various venues around the East Bay.

For much of that time Carrillo was also the operations and marketing director at the now-defunct gay nightclub Club 21 in downtown Oakland. But he resigned in May 2019 due to issues he had with the new owners, said Carrillo.

He had gotten his real estate license in late 2019 but has put pursuing a career in selling property on hold for now. Long harboring dreams of owning and operating his own nightclub in Oakland, Carrillo had opened his restaurant as a way to finance his dream.

He rents the eatery space from the owner of the adjacent bar, which is currently closed due to the pandemic. The profits Carrillo has made from La Frontera over the last 12 months are being funneled toward the purchase of another location where he can open his own nightlife venue.

Carrillo told the B.A.R. he wasn't ready to reveal anything publicly about the status of achieving that dream. A teaser highlighted in red in the email he sent out Monday on the occasion of La Frontera's one-year anniversary, however, hinted at "a major announcement coming soon in the next few weeks."

All Carrillo would say for the time being is that, "My dream may become a reality sooner than anyone imagined."