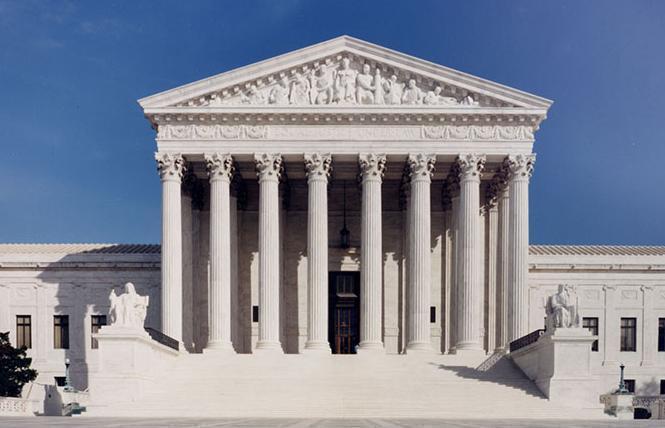 As the United States Supreme Court considers the constitutionality of the Affordable Care Act in the case of California v. Texas, Lambda Legal Defense and Education Fund — a national legal civil rights group — is warning that throwing out the entire law could cause discrimination against LGBTQ people and people living with HIV.

At issue is how much, if any, of the ACA (also known as Obamacare) is constitutional in light of the repeal of the tax that applies to individuals who do not possess health insurance in 2017.

The court heard oral arguments in the case November 10 and it appears that the justices are unwilling to throw out the entire ACA.

The Supreme Court ruled the tax penalty constitutional in National Federation of Independent Business v. Sebelius (2012), but without the penalty in place anymore, plaintiffs are arguing the law causes an unconstitutional undue burden on them.

Lambda Legal filed a 34-page amicus brief May 13 arguing that throwing out the entire ACA would go against the intent of Congress, which not only passed the law but which has failed to repeal it in spite of multiple attempts along party lines since its 2010 passage.

"In accordance with Congress's intent, the court should uphold the constitutionality of the ACA's (currently inoperative) individual mandate. Alternatively, if the court decides the mandate is now unconstitutional, it should sever that provision and uphold the remainder of the ACA, which operates independently of the mandate," Lambda Legal's brief states. "In particular, in 2017, after multiple unsuccessful attempts to repeal the ACA, Congress settled on amending just one provision, lowering the amount of the shared responsibility payment tethered to the individual mandate to $0. Having expressed a clear intention at that time that the remainder of the law remains operative, Congress has continued to legislate with an understanding that the ACA remains alive and well.

"Specifically, Congress continues to support the ACA's overarching goal of ensuring that all Americans, including people living with HIV, are able to access quality, affordable health insurance," it continues. "The ACA's key reforms, none of which hinges on the operation of the individual mandate, have had the intended result of increasing the percentage of Americans who have health insurance."

One of the attorneys who filed the brief, Omar Gonzalez-Pagan, is a gay man who is a New York-based senior attorney and health care strategist with Lambda Legal. He spoke with the Bay Area Reporter by phone following the oral arguments that were heard in the court November 10.

The outcome of the case played a pivotal role in U.S. politics during the weeks leading up to the 2020 presidential election, as the Republican-led Senate rushed to confirm Amy Coney Barrett to the high court before the case was to be heard.

Three key issues
Gonzalez-Pagan said that there are three issues being considered by the court. The first is the issue of standing.

"There are questions about standing — what is the harm here? — and we are probably going to see a split decision on that part of the lawsuit," Gonzalez-Pagan said.

The tax penalty for not complying with the individual mandate was instituted to help the health insurance industry, but "without the tax penalty, the insurance market continued. Nothing catastrophic happened," Gonzalez-Pagan said.

"People continue to buy health care to the extent that they can afford it and the system did not collapse," he added.

The second issue is whether the mandate, without the tax penalty, is unconstitutional.

The third issue is multifaceted itself — is the individual mandate severable from the rest of the Affordable Care Act, and if so, how much of the rest of the law is also unconstitutional?

Gonzalez-Pagan argued that other parts of Obamacare — the prohibition against discriminating against people with preexisting conditions, or on the basis of sex, sexual orientation, and gender identity, or the Medicaid expansion — are severable, and expects the court to see them that way.

As Chief Justice John Roberts said to the Texas solicitor general during oral arguments, "It's hard for you to argue that Congress intended the entire law to fall if the mandate was struck down."

In a similar vein, Justice Brett Kavanaugh told one of the attorneys defending the ACA, "I agree with you that this is a straightforward case for severability under our precedents, meaning that we would excise the mandate and leave the rest of the act in place."

'Huge implications' for people with HIV
Gonzalez-Pagan said that if the court does not sever the rest of the ACA from the individual mandate there would be far-reaching implications for many Americans, particularly people living with HIV and LGBTQ people.

"That's part of why we filed this brief," he said, referring to the May amicus brief. "We want to illustrate to the court the implications of severing the ACA for people with HIV — huge implications."

Gonzalez-Pagan said that without the ACA, people living with HIV and other chronic illnesses could be denied health insurance for their pre-existing condition.

(While President Donald Trump signed an executive order September 24 that he alleged would protect people with pre-existing conditions, the order lacks mechanisms to provide such insurance absent the ACA.)

Further complicating the issue is the Medicaid expansion.

"A large proportion of people with HIV — compared to the general population — rely on Medicaid. Medicaid expansion has been key, together with the prohibition on pre-existing conditions, to expanding access for people with HIV," said Gonzalez-Pagan.

Overturning the law would "mean going back to the days on overreliance on other projects," Gonzalez-Pagan said, such as federal funding from the Ryan White Comprehensive AIDS Resources Emergency Act, a 1990 law that provides for assistance to certain people with HIV.

The ACA also includes the only health care non-discrimination protections on the basis of sex in federal law (excepting the case of Title IX applying to federally-funded schools), Gonzalez-Pagan explained.

The Obama administration considered LGBTQ identity covered under this provision, and the Trump administration did not, though the Supreme Court's ruling in Bostock v. Clayton County earlier this year would seem to place sexual orientation and gender identity under the aegis of sex discrimination. While the Bostock decision interprets the reach of Title VII of the federal Civil Rights Act, the ruling is widely expected to be applicable to many other federal laws prohibiting discrimination based on sex.

"There is no other law specific to health care," Gonzalez-Pagan said. "If the entirety of the ACA were to be overturned it would particularly impact LGBTQ people because of the protections of LGBTQ people in health care."