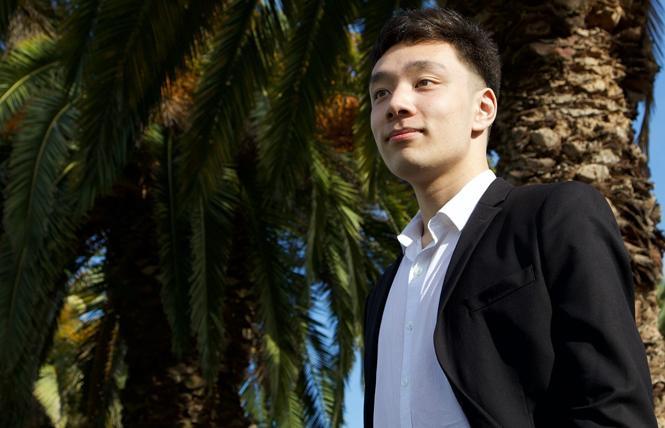 Two out San Mateo County city council candidates were maintaining slim leads in their contests after election officials released updated counts Thursday afternoon. They are part of a trio of political newcomers who are LGBTQ people of color set to be the first out council members in their cities on the Peninsula.

Lissette Espinoza-Garnica, 24, a first-generation queer, nonbinary Chicanx who has lived in Redwood City their entire life, continues to be the first place finisher in the race for the new District 3 council seat. Espinoza-Garnica came out of election night with a 17-vote lead ahead of the second place finisher, Janet Borgens.

When the new vote totals were released at 4:30 p.m. today (November 5) Espinoza-Garnica's lead had grown to 26 votes. The Santa Clara University graduate, where they earned an English degree, now holds 39.21% of the vote, while Borgens' total is at 38.02%.

Espinoza-Garnica is on their way to becoming the Bay Area's first nonbinary elected official, one of several nonbinary candidates to make history with their wins in the November 3 election. Mauree Turner's election to the Oklahoma State Legislature makes them the first non-binary state legislator in the country and the first Muslim lawmaker in Oklahoma.

And Espinoza-Garnica would be one of two LGBTQ people to be serving on the city council in Redwood City. Planning Commissioner Michael Smith, 36, a gay Black business entrepreneur, ran unopposed for the newly created District 4 council seat.

In response to a question from the Bay Area Reporter, Espinoza-Garnica said they would wait to declare victory until after the next vote count update at 4:30 p.m. Monday, November 9.

"I don't think we can yet. It's hard to tell how many D3 votes were counted," explained Espinoza-Garnica.

Also continuing to hold on to his lead was James Coleman in his race for the newly created District 4 seat on the South San Francisco City Council. Coleman, who is bisexual, saw his initial 12-vote lead over his opponent, City Councilman Richard Garbarino, grow to 55 votes. His share of the vote now stands at 50.53%, while Garbarino, who previously had been elected citywide, received 49.47% of the vote.

Coleman's defeating his city's current mayor is all the more remarkable due to the fact he oversaw most of his campaign from his dorm room at Harvard. He returned to the campus over Labor Day Weekend and is set to graduate in May with a degree in human developmental and regenerative biology.

At age 21, Coleman will be the youngest person serving on his hometown's city council and its first out LGBTQ member. He is biracial, as his father was white and his mother is Asian.

The three are among a number of out non-incumbent city council candidates in the Bay Area who placed first in their races on Tuesday's ballot. Sunnyvale City Council candidate Alysa Cisneros, who is queer, continues to lead in her race for the District 2 seat.

In Santa Clara, gay planning commissioner Anthony Becker, 35, is holding on to his lead in his bid for the newly created District 6 council seat. He will become the second LGBTQ person and first gay man to serve on the Santa Clara City Council.

Across the bay in Berkeley, poet Terry Taplin, a gay married Black man, is leading in his race for the city council's District 2 seat against the incumbent, Councilwoman Cheryl Davila.

Devin Murphy was elected citywide as the second gay councilman and first Black LGBTQ council member in the city of Pinole. And in Livermore, voters in the city's newly created District 3 council seat handily elected professional photographer and branding consultant Brittni Kiick, a married mother of two who identifies as pansexual.

Thanking her supporters in a note posted on Facebook early Wednesday, Kiick noted she would soon be transitioning her community advocacy work from an outsider perspective to one of a person with "an official seat at the table."

"This election was about doing more than speaking truth to power, but actually ensuring activists are holding some of that powerm," Kiick wrote. "I will keep working to make sure that young, LGBTQ, and BIPOC communities understand the local systems of governance so they can find their rightful place at the table. I will work to ensure you are heard loud and clear by passing the mic."