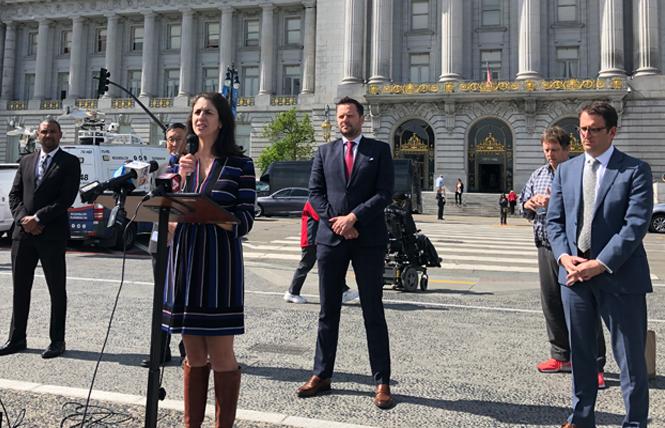 Five San Francisco city supervisors held a noontime news conference at Civic Center Plaza March 10 to call for new legislation intended to stave off the economic effects of the novel coronavirus, even as other city officials propose and implement plans to deal with the outbreak.

The five pieces of legislation will be introduced this week and next, largely by the progressive bloc on the Board of Supervisors. As of March 10 there have been 14 cases of coronavirus reported in San Francisco and no deaths, so far.

At the news conference, the supervisors stood at arm's length from each other to demonstrate that people should not stand close to each other as much as possible to prevent spread of the virus.

"We are standing apart to show the need for social distancing," District 9 Supervisor Hillary Ronen said.

Ronen is introducing an ordinance that allows the city treasurer to take out a line of credit in the amount of $20 million from a bank and then distribute it as no-interest loans to small businesses that would close down otherwise due to inability to pay rent or a mortgage. She is also introducing a resolution, along with District 11 Supervisor Ahsha Safai, calling upon banks to suspend foreclosures, fees, and penalties to small businesses.

"We have already seen businesses in Chinatown hit hard and hit for a while," Ronen said.

District 6 Supervisor Matt Haney, who represents the South of Market and Tenderloin neighborhoods, said that in his district "some businesses have seen a 50% hit in revenue already. We can't wait as a city to step up and support them."

Haney is introducing legislation to "support employees who experience a loss of income because of COVID-19," according to a news release. (COVID-19 is the respiratory disease caused by the novel coronavirus.) He said no-interest loans to people furloughed or laid off are being discussed.

During the federal government shutdown in late 2018 and early 2019, some $20 million in loans were made available for federal workers who were going without pay.

In 2006, San Francisco was the first city in the country with a paid sick leave ordinance for all employees who work in the city. Employees earn one hour of paid sick leave for every 30 hours worked. But Mar said that "our existing paid time off laws were not designed with public health emergencies in mind," and people shouldn't have to use sick time for a self-quarantine.

"Nobody should have to choose between their health and their job" Mar said. "Working families deserve to know that the city has their back."

Eviction protection sought
One of the more dramatic pieces of legislation, introduced by District 5 Supervisor Dean Preston, would ban specified evictions during the coronavirus state of emergency.

Mayor London Breed declared a state of emergency for San Francisco February 25 because of coronavirus.

San Jose Mayor Sam Liccardo said last week he was pushing for a similar measure in his city. Preston has been a longtime tenants rights advocate, having founded the nonprofit Tenants Together in 2008.

Preston's legislation would halt nonpayment evictions related to coronavirus, such as following government guidelines or loss of income due to avoiding work because of a self-quarantine. It would also ban most no-fault evictions, and late fees due to non-collection of rent during this time.

"We, as a city, cannot allow residents to lose their homes unless absolutely necessary," Preston said. "We know as a result of the state of emergency that many people have already experienced income loss and that income loss is almost certain to continue."

Preston said that landlords who need the rent money to prevent foreclosure would be eligible for a loan from Ronen's legislation.

When asked about Preston's eviction protection legislation, a spokeswoman for Sheriff Paul Miyamoto said in a phone call with the B.A.R. March 10 that "we can't comment on something we haven't seen."

"We follow court orders, so whatever the courts tell us to do, we do," sheriff spokeswoman Nancy Crowley said. "I don't know what else to say. It's too soon. The reason we perform evictions is because it's in the constitution. We'll do whatever we're supposed to do."

Walton signaled his broad support for the legislative package.

"We are going to do everything we can as a Board of Supervisors to minimize those impacts," Walton said.

Peskin said that the kinds of public health measures taken in the South Bay — such as Santa Clara County's ban on public events of more than 1,000 people after its first coronavirus death — will likely come to pass in San Francisco.

"It's only a matter of time," Peskin said.

"This is the largest public health crisis of our time," Peskin added. "This is a quickly, rapidly evolving situation hour-by-hour, day-by-day."

Peskin was questioned as to why the March 14 St. Patrick's Day parade was canceled but the Golden State Warriors are playing a home game the night of March 10 at Chase Center.

"I'm aware of the Warriors game scheduled for tonight," Peskin said. "Until we issue an order, it's between the Warriors and their guests."

Concurrent with the news conference, Mission Local reported that the Warriors have rebuffed requests from Peskin and other public officials to cancel games.

Buildings owned by the city and county have already banned events of 50 or more people until March 20. On Wednesday, the mayor issued a new order banning large gatherings of 1,000 people or more.

Absent from the news conference was gay District 8 Supervisor Rafael Mandelman, who represents the Castro on the board.

Mandelman, in a written statement March 10 at 10 a.m. said that he hadn't "seen the language of any legislative proposals from my colleagues" and that they did not ask him to participate. Wednesday, Mandelman's office said he was asked to participate two hours before the news conference but was unable to.

"My office is in close communication with the Department of Public Health, the mayor's office and other city departments to ensure that the city is taking the necessary actions to protect our residents and support our small businesses and workers," Mandelman stated. "Residents of the Castro and people across the city should be closely following the latest Department of Public Health guidelines.

"These include recommendations that vulnerable populations (people aged 60 and older and people with certain health conditions) limit outings, that large gatherings and non-essential events be canceled and that workplaces minimize close contact, have adequate hand washing capabilities and offer the ability to telecommute if possible," Mandelman continued.

Mandelman's office said he would comment on the proposals once they were drafted and shared with him.

Breed's office did not respond to a request for comment at press time.

Housing, jail plans
Breed's office the morning of March 10 announced that the city will provide housing for those who are homeless or in a shared-living environment such as a single-room-occupancy hotel and who need to be quarantined.

This temporary housing will include RVs that will be parked in the Presidio.

"Reducing the spread of COVID-19 within our community means mitigating exposure to the virus," stated Mary Ellen Carroll, executive director of the San Francisco Department of Emergency Management. "Being able to self-isolate or quarantine for at least 14 days is not a viable option for everyone. Many of us live in shared living spaces making the coronavirus spread much more likely. We need to help these individuals by giving them temporary isolated housing while aggressively reducing the spread of the virus in San Francisco."

San Francisco Public Defender Mano Raju announced March 10 that he wants people held for pre-trial in San Francisco County jails to be released if they are in groups particularly susceptible to coronavirus infection, such as people over 60, those with chronic medical conditions and those with compromised immune systems.

According to an interview published in Poz magazine (https://www.poz.com/article/people-hiv-need-know-new-coronavirus) March 2 with Dr. Steve Pergam of the vaccine and infectious disease division at the Fred Hutchinson Cancer Research Center in Seattle, people with HIV are at risk depending upon their level of immunosuppression.

"For an HIV patient who is on stable antiretroviral therapy and has a normal CD4 count, their risk may be slightly increased," Pergam said. "People often lump HIV patients with other immunosuppressed patients, but HIV is a different disease than it was years ago. For people who have a reconstituted immune system because of treatment, I think the risk is not going to be tremendously different."

"We are taking this action to protect older adults and those with compromised immune systems who are extremely vulnerable right now," Raju said in a news release. "People who are incarcerated in jail are already exposed to an unsafe environment. The cramped and unsanitary conditions in jail put the older or immunocompromised population at a much greater risk of contracting and spreading coronavirus."

Miyamoto, who oversees the jails, sent a letter to Raju late March 10 to address his concerns.

"The sheriff's office has a proactive policy for evaluating SWAP (Sheriff's Work Alternative Program) and electronic monitoring eligibility," Miyamoto wrote. "We regularly review every sentenced person in our jail to determine their eligibility for release. This policy will continue."

Miyamoto said that he is working closely with the Department of Public Health to limit the threat of coronavirus in county jails.

"The Department of Public Health has established guidelines based on the Centers for Disease Control protocol to prevent and control the spread of disease in our jails. My office follows these guidelines," Miyamoto stated. "In partnership with Jail Health Services, we continuously identify and monitor our most vulnerable populations who may be older or immunocompromised to ensure their safety."

The Department of Public Health is advising people to wash their hands with soap and water for at least 20 seconds, avoid touching their faces, covering their coughs and sneezes, trying alternatives to the handshake and staying home if they are sick.

For more information on the coronavirus, go to https://www.cdc.gov/coronavirus/2019-ncov/index.html

Updated, 3/11/19: This article was updated to include more on Rafael Mandelman's response.