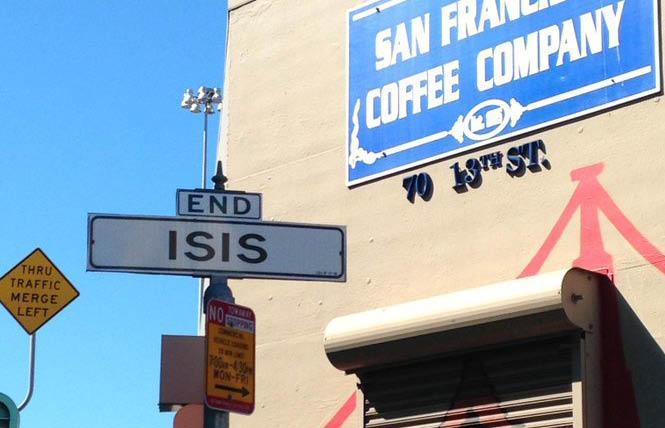 A petition to rename a South of Market street after Harvey Milk has reignited the issue of honoring LGBT leaders with street names in San Francisco.

Last week, a change.org petition (https://bit.ly/2uNuSg9) was created that asks Mayor London Breed and the San Francisco Board of Supervisors to change the name of Isis Street, a small side street in the South of Market neighborhood, to Harvey Milk Street.

As of Tuesday, it had garnered 45 signatures toward a goal of 100.

The first such proposal to rename a street after Milk failed to gather steam back in 1999. Milk was the first openly gay man elected to office in San Francisco and California when he won a seat on the San Francisco Board of Supervisors in 1977. He was assassinated the next year.

But now the creator of the petition — David Collins, 59, a straight ally who owns property on Isis Street — said he would be open to renaming the street after someone else, after members of the LGBT community indicated in Facebook discussions after the Bay Area Reporter's initial January 15 article online that a street in SOMA should be named for a member of the leather community, or that Milk should be honored with a different street.

"Maybe instead of Isis Street, it could be something that has a patriotic connotation like Veterans Street," Collins said in a January 17 interview with the B.A.R., adding that he may rework his efforts to reflect that. "The most compelling thing is to take the Isis name off.

"The LGBT community is in a better position to name Harvey Milk street, and I would support that," he added.

Gerard Koskovich, also of the GLBT Historical Society, suggested renaming Isis Street for Michel Foucault, the French philosopher who frequented the SOMA LGBT scene and died of complications from AIDS in 1984.

At least two San Francisco supervisors expressed their support for the idea after the initial petition was launched. District 6 Supervisor Matt Haney (Isis Street is in his district) wrote to the Bay Area Reporter via text message, "I love it."

Isis Street is near the SF Eagle leather bar and the under-construction Eagle Plaza in the Leather and LGBTQ Cultural District.

"Its name presumably had paid homage to 'Isis,' a goddess from the polytheistic pantheon of Egypt," the petition states. "Unfortunately, Isis has taken on a new, maleficent meaning, referencing the Islamic State of Iraq and Syria.

"This petition will be presented to San Francisco Mayor London Breed and the San Francisco Board of Supervisors in hopes that they will take action and change this street name to Harvey Milk St.," it reads.

Collins spoke with the B.A.R. by phone early January 16. He owns a 10-unit building on Isis Street.

Robert Goldfarb, a gay man who serves as the president of the Leather and LGBTQ Cultural District board, wrote in an email to the B.A.R. January 16 he will see what people in the area think of the proposal.

Kim did not respond to a request for comment.

Past effort unsuccessful
San Francisco does not have a street named for the slain LGBT civil rights icon. San Diego had the first street named for Milk, in 2012. Salt Lake City named a street for Milk in 2016, followed by Portland, Oregon in 2018.

A ballot proposition to remove Chavez's name went down in defeat November 7, 1995 by 54%-45%, according to the elections department.