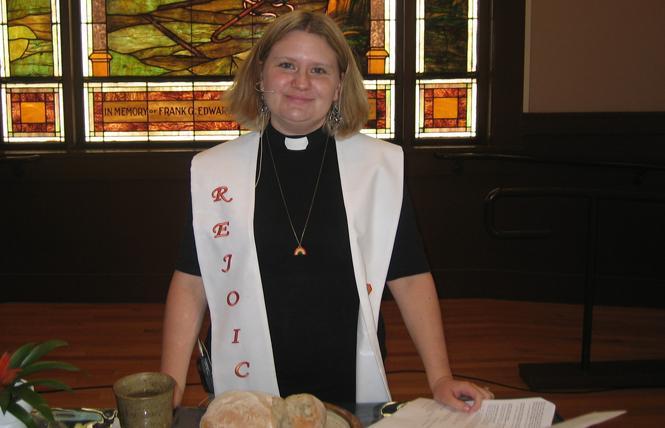 The Reverend Sadie Stone said that Bethany United Methodist Church in Noe Valley, where she is pastor, has a long history of ministry to the LGBT community. Photo: Brian Bromberger

The third largest Christian denomination in the United States — the United Methodist Church — may split over the issue of acceptance of LGBT people.

A 16-member group of church officials fashioned a proposal, announced January 3, that would allow United Methodists opposed to same-sex marriages and LGBT clergy to split into a "traditionalist" faction.

Liberal and traditionalist Methodists have been fighting over the issue for almost two generations. While the church's official teaching is that homosexuality is "incompatible with Christian teaching," that language has been challenged at every General Assembly (a quadrennial meeting of church officials) since it was first approved in 1972.

With the traditionalist Methodists out of the UMC, it is likely such language would be changed. Last year, church leaders voted 53-47% to uphold the current church teachings.

But while traditionalists have the upper hand in these kinds of votes, they have been unable to enforce their implications. There are open LGBT clergy in the UMC, and UMCs that perform same-sex marriages.

The Bay Area Reporter reached out to every UMC in San Francisco, as well as to their governing body, the California-Nevada Conference of the UMC, to ask where they would stand if the proposed schism comes to fruition. Most of the churches did not respond to requests for comment.

Bethany UMC at 1270 Sanchez Street in Noe Valley, just blocks from the Castro, has been performing same-sex marriages for decades, according to its pastor, the Reverend Sadie Stone.

"Bethany has a long history of ministry with, and to, the LGBTQ community for more than 50 years. We would never align ourselves with a traditional denomination that seeks to cause more harm and discrimination," Stone said. "We already live into full inclusion and support full inclusion for the entire denomination.

"The western jurisdiction of the church happens to be more progressive than other areas of the country and we simply decided to live into justice, love, and inclusivity with the support of our bishops," Stone added.

Stone wrote a letter to her congregation to explain the upheaval in the UMC, stressing that while a split has been proposed, "nothing was decided."

Stone said that a lesbian former pastor at Bethany, Karen Oliveto, is now a Methodist bishop and is married to her partner. Indeed, Oliveto was the first openly lesbian bishop in the UMC. She oversees both the UMC's Rocky Mountain and Yellowstone conferences

When asked her thoughts on the proposed split, Oliveto, who is now in Colorado, wrote to the B.A.R. that some in the UMC turn "our lives as queer people into an issue to debate" to the detriment of "deeper theological differences found in the denomination."

"This protocol, which will result in a separation between Traditionalists (who have been staunchly anti-LGBTQ+) and the rest of the denomination (which, in the U.S., is largely supportive of an inclusive church), has the potential to greatly reduce the harm the church has done to us," Oliveto wrote in an email to the B.A.R. January 14.

Glide Memorial UMC at 330 Ellis Street in the Tenderloin has long been a spiritual home for progressive San Franciscans, including members of the LGBT community.

It has bucked the UMC on many occasions since the 1960s, when the Reverend Cecil Williams introduced a more liberal style of Christianity there.

Glide has been performing same-sex marriage ceremonies since the late 1960s, according to Petra Tuomi, senior director of communications for Glide.

Glide, which is in a dispute with the leadership of the UMC, declined to comment to questions for this story. It did send a formal statement from Karen Hanrahan, the president and CEO of the Glide Foundation.

"It saddens us that the world's religious institutions continue to debate whether or not the LGBTQI community is accepted into their denominations," the statement reads, in part. "No one should have to suffer a lack of acceptance for who they are or to be told they are not worthy of God's love."

Bishop Minerva Carcaño of the California-Nevada Conference of the UMC expressed a similar sentiment.

"The California-Nevada Conference and its bishops, present (myself) and past, have committed to resist what we consider the unjust laws of The UMC in relationship to LGBTQ+ persons," she added.

Carcaño noted that the California-Nevada Conference has ordained the largest number of LGBT people in the entire UMC.

"We are committed to full inclusion," Carcaño wrote.

The UMC will make a decision on the proposal later this year.

The UMC claimed 12.5 million members globally in 2018. About half of those live in the U.S., making it America's third largest Christian denomination after the Roman Catholic Church and the Southern Baptist Convention.

According to a 2014 Pew Research survey, 60% of United Methodists in the U.S. believe that homosexuality should be accepted by society, and a plurality of 49 percent supported same-sex marriage with 43% opposed and 8% unsure.