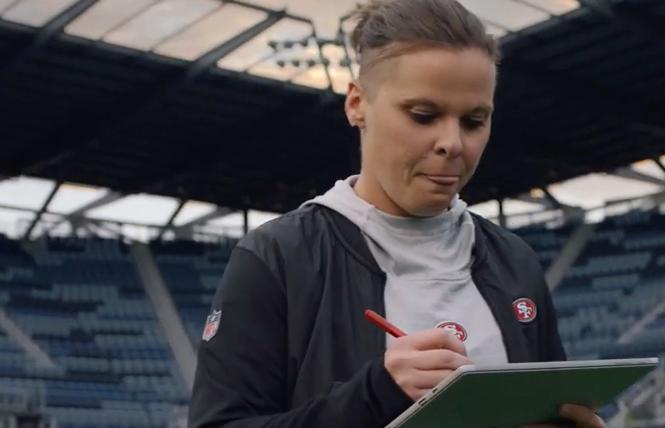 First off, a big yahoo to the San Francisco 49ers for their clutch regular season-ending victory over the rival Seahawks in Seattle to clinch the division title and capture the top seed in the NFL playoffs. The Niners are at home this weekend in the conference semifinals against the Minnesota Vikings with a chance to return to the Super Bowl for the first time since the departure of quarterback Colin Kaepernick.

Niners offensive assistant coach Katie Sowers, the only out lesbian coach on any NFL team, is featured in a new ad for the Microsoft Surface Pro 7 laptop that aired last weekend during the playoff game between Seattle and Philadelphia (Seahawks bounced back for the win). (See July 19, 2017

You can probably expect to see the ad again if the Niners advance to the Super Bowl. Too many years I've had to follow up Super Bowl weekend mentioning homophobic themes in some of the television advertising. Having Sowers in an ad Super Bowl weekend?

The ad can be viewed online at www.youtube.com/watch?v=1hU39FPGalQ

"Each year the Sin City Classic continues to grow and brings even more LGBTQ athletes, allies and fans to Las Vegas for a weekend filled with competition and camaraderie," Ken Scearce, tournament director, stated. "Our nightly events continue to get bigger and better, and we're happy to be able to offer attendees the opportunity to come together and bond through sport."

In recent years, the four-day training camp has become a major stop on the LGBT wrestling circuit as the European clubs have reintegrated into Wrestlers WithOut Borders. This year's event will be held at a sports complex about three miles north of Berlin and offer six freestyle wrestling coaches.

"We've come a long way from the first events in some run-down locations to the perfect spot in a sports center to the north of Berlin," club spokesman Mitch Krüger said. "This location provides modern sports facilities with a huge wrestling gym, good accommodations with double or triple bedrooms, catering, an indoor swimming pool, sauna, bowling and barbecue." He said the weekend will offer training, technique development, open mat sparring, grappling workshops, swimming, and a party.

The camp is limited to 80 participants; as of Monday, 45 slots remained available. Cost for all four days begins at around $260.

For registration and information about the camp, visit http://www.berliner-ringer.de/index_en.php