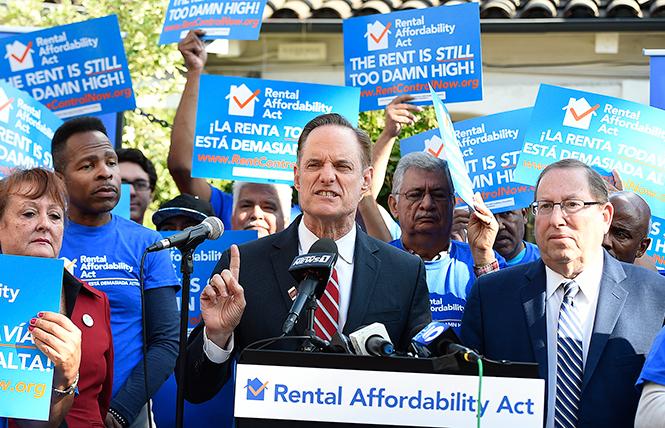 Michael Weinstein, president of the AIDS Healthcare Foundation, spoke at a Los Angeles news conference and rally December 5 at Placita Olivera to announce the submission of nearly one million voter signatures to qualify the Rental Affordability Act, a ballot initiative that would allow for the expansion of rent control in California. Photo: Courtesy AP

Los Angeles-based AIDS Healthcare Foundation has submitted signatures to get a rental affordability initiative on next November's ballot.

AHF held a series of rallies recently in San Francisco, Los Angeles, and San Diego where officials announced that more than 1 million signatures had been submitted to the secretary of state's office; 623,212 valid signatures are required.

Dubbed the Rental Affordability Act, the measure would expand rent control to more buildings and also place limits on rent increases when a new renter moves in.

In 2018, an initiative that would have repealed the state's Costa-Hawkins Rental Housing Act failed. Costa-Hawkins puts limits on municipal rent control ordinances.

Organizers at the San Francisco rally said the lack of stronger rent control protections affects LGBTs and others throughout the state.

Ged Kenslea, senior director of communications for AHF, pointed out that 40% of homeless youth identify as LGBTQ.

"It's understood that a significant percentage of lesbians often work in lower income jobs and professions, a factor that handicaps them in a tight and expensive housing market," added Kenslea.

The San Francisco event was held December 5 at the Redstone Labor Building, 2948 16th Street. Many trans women of color, all of whom said they are being impacted by the high rents in the city, were in attendance. In September, Curbed SF reported that median market rate rents for San Francisco were $3,540 per month.

"My community is what brought me here," L'reale Earle, a trans woman of color, told the Bay Area Reporter. "I am part of a marginalized community who is deeply impacted by the high-ass rent to the extent that we either can't afford housing and on the flip side high-ass rent is preventing stability for, specifically, black trans women who don't have specific resources aimed at housing or mental health resources or trans shelters. We are the last to get jobs and housing and because we can't afford the rent we are relegated to substandard living conditions."

The rally began with attendees angrily chanting "The Rent Is Too Damn High!"

Jesse Brooks, community mobilizer for AHF, was among the speakers.

"I've seen California change over the last 10 years," Brooks said. "And I've seen people that I grew up with side-by-side lose their homes. And there's so many more on the edge of losing their homes."

He said that the initiative is a way to fight and resist.

"We can't just sit by idly while our brothers and sisters lose their homes because it might be them today and it might be us tomorrow," Brooks added. "The rent is too damn high, so we have to let people know at the ballot box, not on Facebook with a like, we've got to do what you're doing today, using your voice, using your feet, and resist, and we have to continue to resist, because they're going to continue to push. We cannot let the Bay Area become a home for one-percenters."

"I am here because California's affordability housing crisis demands actions. Bold actions," Perez-Ruiz said. "Approximately 18 million Californians are renters. In rural counties like Tulare, since 2018, we've seen a yearly double-digit decrease of home ownership and double-digit increase of rental housing. A one-bedroom apartment is going for $1,025 — a one bedroom in Tulare County. When folks are working 40-hour shifts at $11 an hour, they bring home $1,906 gross. So California's housing crisis is no longer a Bay Area or Southern California problem, but is a problem that belongs to all of us."

Some people at the rally said they've had to leave the city.

"Being of ethnic culture I am disenfranchised and denied the inalienable rights and entitlements established to provide prosperity for all citizens of the USA," Velvet Sapphire, a 55-year-old black and Cherokee trans woman, told the B.A.R. "Being trans and mixed breed I have been forced to move out of my San Francisco housing to Pittsburg and that should never have occurred. Nothing is done and that denies me my quality of life and causes me trauma."

In an email, Michael Weinstein, co-founder and president of AHF, expressed confidence that the Rental Affordability Act would pass.

"Seventy-five percent of Californians hold a positive to very positive view of rent control," Weinstein wrote. "The housing affordability and homelessness crisis are the most pressing social justice and public health emergencies in our time, especially in Southern California. We must take action to stop it now. To that end, we intend to bring the issue directly to California voters next November — and we intend to win."

Californians for Responsible Housing, which is opposed to AHF's initiative, pointed out that 2018's Proposition 10, the Costa-Hawkins repeal initiative, was rejected by voters, losing by nearly 40% to 60%.

The group also said that AHF refused to support Assembly Bill 1482, authored by Assemblyman David Chiu (D-San Francisco). The law, which Governor Gavin Newsom signed, will cap rent increases at 5% each year plus inflation and goes into effect January 1.

AB 1482 is considered "the most anti-rent gouging legislation in the nation," Californians for Responsible Housing said in a news release.

The group added that AHF's ballot measure would discourage housing construction, reduce property values, and take large numbers of units off the market for low- and middle-income families.