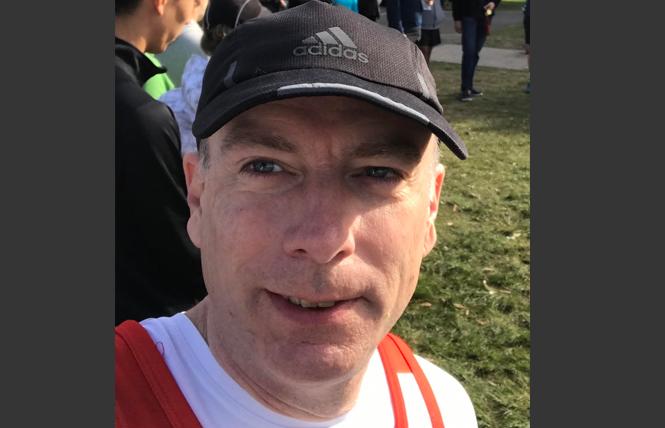 International Front Runners became a little more "inter" and a little less "national" toward the end of 2019 when it elected Chris Rauchle of Australia as its new president. Rauchle, 52, is the first IFR president from outside the United States. Long primarily composed of clubs in the United States, IFR now has 113 clubs on five continents and most of them are not in the U.S.

Rauchle, a gay man who married his husband, John Byrne, in New Zealand in 2015, was elected during a steering committee conference call December 1.

"I think it is important to show that Front Runners is a truly global organization for it to continue to be successful into the future," Rauchle told the Bay Area Reporter. "We have had clubs in Asia, South America and Europe before, but bringing an emphasis to clubs outside of North America is important, given that most population growth will be in Asia and Africa in the coming decades."

Rauchle said he took up running about 15 years ago and connected with the Sydney chapter of Front Runners once he decided it was a sport he would stick with.

"I have been running with the Front Runners for over 10 years and have served on the Sydney committee in a variety of roles for half of that," he said. "I have been the International Front Runners representative for the Australia/Pacific region for over four years. When Danny Luong announced he was going to retire, I thought it was a good opportunity to continue on with his good work."

Former president Luong is credited with establishing an IFR partnership with Brooks Running and will continue to oversee that scholarship program. Under the agreement, the network of LGBT running clubs and the Seattle-based sports footwear and apparel maker will work to promote inclusion in running.

Rauchle is expected to focus efforts on further international expansion.

"Asia is a massive opportunity that cannot be ignored," he said. "While we must retain a focus on existing memberships in Australia, New Zealand, and Hong Kong, China has four cities that have a larger population than the whole of Australia, and a hundred cities with over a million people.

"India, too, has over 40 cities larger than a million people; and both China and India have large expat populations in North America and Australia," he added. "I hope we can leverage our connections in existing clubs to start new clubs in these growing regions as their environment becomes cleaner, LGBTQI+ rights become more common, and people have time to start running as a hobby. Worldwide, there are opportunities in countries and cities are enjoying newfound freedoms where LGBTQI+ runners can now freely meet up. We have started working to establish clubs in Africa and Mexico/South America and I see future opportunities in newly liberal Taiwan and Vietnam to name a few."

And of course, the 2022 Gay Games are scheduled for Hong Kong, assuming that remains feasible in the changing political scene.

"I think Hong Kong is hugely significant and it is important that the Gay Games in Asia succeed now as this will hopefully be the first of many such events in the future," Rauchle said. "Just as the economic center of the world is moving back to Asia, in the future — with 4 billion people projected to be living in Africa in the next 30 years, and a billion in China and India — it is to be expected that the landscape of Front Runners clubs will have a different and more diverse membership than it does today."

Gay Games bidding for 2026 opens
The Federation of Gay Games announced this week the start of the bidding cycle for the rights to host the quadrennial Gay Games XII in 2026.

The site selection committee reported at the FGG's annual meeting in November that 24 cities had already expressed interest in hosting Gay Games XII — up from the 11 at the start of the Gay Games XI bidding that wound up being won by Hong Kong.

Interested bidders will need to submit their request for information documents by February 21. Brisbane, Australia and Liverpool, England both began efforts in 2018 to land Gay Games XII.

The "long list" of official bidders will be announced February 29, and then the prospective bidders will be sent the request for proposal forms the next day. Bidders who wish to proceed must submit letters of intent and a fee of $7,500 by April 30. A second $7,500 fee will be due August 1 when formal bid books are turned in and question and answer discussions with federation member delegates begin.

FGG will choose finalists January 31, 2021. Those that are selected and choose to continue will undergo more discussion rounds, expand their bid books, sign a pro forma license agreement, and pay a $15,000 fee at the end of April 2021. The members and board of the FGG will vote on the presumptive host in November 2021, in Hong Kong.

Bid information is available at http://www.gaygames.org

Mosier in Olympic Trials
Transgender athlete Chris Mosier announced December 18 on Instagram that he will compete in the U.S. Olympic Trials in January in Santee, California, trying to earn a spot on the men's Olympic track team competing in the 50-kilometer race walk.
This would make Mosier at least the second transgender man to compete in the Olympic track trials — Keelin Godsey competed in the 2008 and 2012 trials in the women's hammer throw after transitioning in 2005 — and it is believed he will be the first to compete against fellow men.

"Transgender athletes do have a place in sport, even at the highest levels," Mosier wrote.