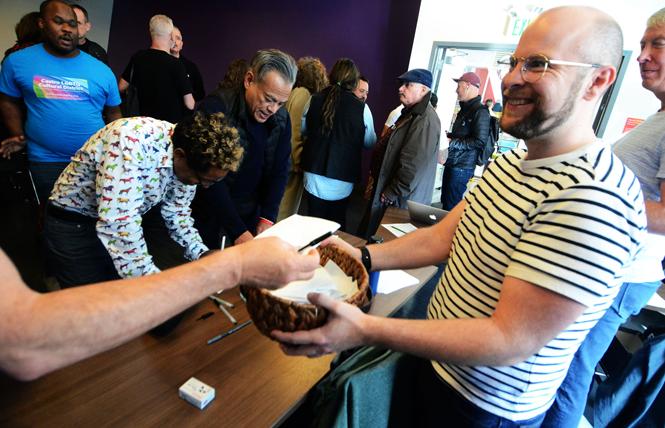 Andrew Shaffer, right, outreach co-chair for the Castro LGBTQ Cultural District, accepted another ballot in the December 14 voting for the first five members of the advisory board. Photo: Rick Gerharter

The first five members of the inaugural advisory board of the Castro LGBTQ Cultural District were elected Saturday, December 14.

Of 12 candidates, the five winners were Shannon Amitin, a trans activist who is a co-founder of Jolene's Bar and Restaurant in the Mission; Shaun Haines, the founder and executive director of San Francisco Impact Partners; Elizabeth Lanyon, associate director of philanthropy at the National Center for Lesbian Rights; Alison Sparks, executive director of the Masto Foundation; and Christopher Vasquez, a gay man who's communications director for NCLR, according to Moisés Garcia, who served as elections chair.

The cultural district is selecting its 15-member advisory board over the course of three separate elections, according to Jesse Oliver Sanford, a gay man who served as the governance chair of the working group that heretofore was in charge of the district's operations. Sanford was also a candidate for the board.

He and the other six candidates who came up short can run for one of the remaining 10 seats on the board, Sanford said. Garcia said that the nomination period for the next set of elections will close February 8, the election will be February 22 at the LGBT center. The final election will be held sometime in April.

The election was held at the San Francisco LGBT Community Center at 1800 Market Street and 168 people voted, Garcia said. Anyone who showed up was eligible to vote, which will also be the case for future elections.

"I was really excited by how many people showed up to vote. It's the most engagement I've seen since I became involved in summer 2018," Garcia wrote in an email to the Bay Area Reporter Monday.

Haines, a gay black man, said he was grateful to be among those chosen for the advisory board.

"I'm very much honored by the community for electing me and the four other members of the initial advisory board," Haines said.

He said that the new board members met Monday, December 16, to discuss the board's future. He said the next meeting would be Wednesday, January 15.

Lanyon, a lesbian, expressed a similar sentiment in an email to the B.A.R. Monday.

"I am very excited about this opportunity to represent our community. I am grateful for the support of the community to ensure that our advisory board is representative of the district," she wrote. "I hope people will continue to turn out as we work through the process of building our Castro LGBTQ Cultural District."

Vasquez wrote in an email to the B.A.R. Tuesday that he is "thrilled" to be on the board.

"Seeing nearly 200 people that represented every facet of our beautiful and diverse community show up to the SF LGBT Center to vote for an obscure board on a Saturday was inspiring," Vasquez wrote. "It shows me how committed the community is to making sure the Castro remains a vibrant neighborhood with a full representation of our entire culture so that the queerborhood can remain a beacon around the world."

While he lost in his bid to be among the five initial board members, Sanford said in an email to the B.A.R. late Monday that he plans to run again in February.

"While I am obviously disappointed that I wasn't elected personally, the group who were are an amazing, competent, creative, diverse bunch," Sanford said. "I look forward to working with them in all kinds of ways."

Sanford previously told the B.A.R. that by designating certain neighborhoods as cultural districts, the city is trying to help the diverse neighborhoods that San Francisco is known for retain their individual characters in the face of gentrification.

Amitin, a trans activist, and Sparks, the executive director of the Masto Foundation, did not respond to requests for comment as of press time.