Transmissions: One day after 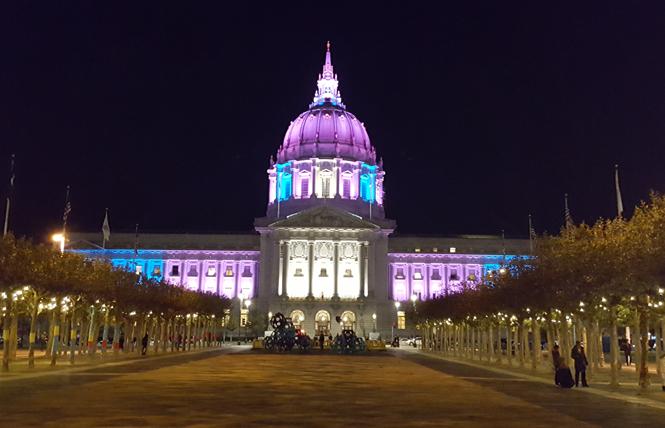 San Francisco City Hall is lit in the colors of the trans flag. Photo: Cynthia Laird

On November 20, transgender and nonbinary people — and our allies — across the world came together to honor those murdered due to anti-trans violence. This year marks the 20th since a group of people in San Francisco, including yours truly, and another group in Boston decided to take to the streets in their respective cities, launching the Transgender Day of Remembrance.

TDOR, as it is commonly known, has largely remained the same over these past two decades, though the way it is honored has traveled down a few avenues.

In some places, "and resilience" has been added to the name, acknowledging that there are indeed many of us who have survived, and who continue to thrive. It's a good acknowledgement that we are more than just our deaths.

By the same token, many have expanded this out to a week of events, under the name "Transgender Awareness Week." This, in turn, has expanded to "Transgender Awareness Month" in some areas, including San Francisco. I have less love for this, but only from a semantic side. I feel that we need more than just awareness that we exist in this world, no matter how long a time period this is applied to.

Some TDOR events opt to go beyond the understanding that this is an event focused on anti-transgender violence. They may add in cases of suicide to their tally, a choice that I can empathize with — but that I opt not to typically include on the lists that I compile.

Some, too, add in just about every transgender death they can find, perhaps out of a misunderstanding as to what TDOR is about — again, anti-transgender violence — or perhaps to inflate the numbers on an issue where, quite frankly, one death is too many. Passing away after a long, violence-free life is not what TDOR is about. Would that it was.

That said, I don't tend to tell people what they can and cannot do when it comes to TDOR. I may have been one who helped get the ball rolling for this event honored globally, but I don't like to think of it as something that I or anyone else needs to control. People grieve in different ways, and it would simply be wrong to force my personal view onto the whole.

Even if, I must admit, I have.

I have to acknowledge some uncomfortable truths when it comes to TDOR, ones that I often find myself pondering. I often feel that the white trans woman that I am should not be a spokesperson for a contagion that predominately preys on black trans women. It's not that I wallow in "white guilt" about it, per se, but I use it as a reminder to center voices other than my own, and try to use my privilege constructively.

I also often contemplate the ways that TDOR may have framed the trans rights struggle as a whole. Much as I alluded to above, there's a lot of living we all do. We are resilient; we do — when given the chance — thrive.

At the end of TDOR, our candles are extinguished, our signs and banners are put away, and we go back to living our lives.

One day after TDOR, I want you to ask yourself a simple question: what are you doing today to try and make the next TDOR an observance where fewer names are read, and instead, more of us are flourishing.

Next Transgender Day of Remembrance, we may have a new president-elect and they may be willing to stop the horrible rollbacks of our rights that have happened under President Donald Trump. It's also likely that races from the halls of Congress to your local school board will be decided, and each of those may affect us. Leading up to the election, it's important for people to help those candidates who will stand with the trans community.

We also live in a time where misinformation about transgender people runs rampant. We still live with unfounded specters of transgender restroom predators. Lately, too, we've seen this absurd notion of men trying to infiltrate women's sports under the guise of transgender rights, with no less than "South Park" making an even deeper mockery of the idea. These make life harder for us, and instill fear of us in others — anxiety that can lead to violence against us. Now that this year's TDOR has passed, people should continue to help educate others and show that these same fears are not part of reality.

Right now, there are young — and not-so-young — transgender people who may be coming to terms with their own transness in this awful world of 2019. They may be facing homelessness after their families kick them out, harassment in their schools or workplaces, or face confrontations that could lead to their own deaths.

This is the challenge I put forth to you: do something November 21, and every other day, to build a better world for trans and gender-nonconforming people.

On November 20, transgender and nonbinary people — and our allies — across the world came together to honor those murdered due to anti-trans violence. We remember our dead, we honor our resilience, and we rededicate ourselves to creating a better world where people are not murdered because someone had an issue with transgender or gender-nonconforming people.

I won't tell you how to honor our dead, but please heed this: one day after, we must show that we will continue to fight like hell for the living. It is the least we can do.

Gwen Smith remembers. You can find her at www.gwensmith.com