In SF, Power speaks about fighting for LGBT rights globally 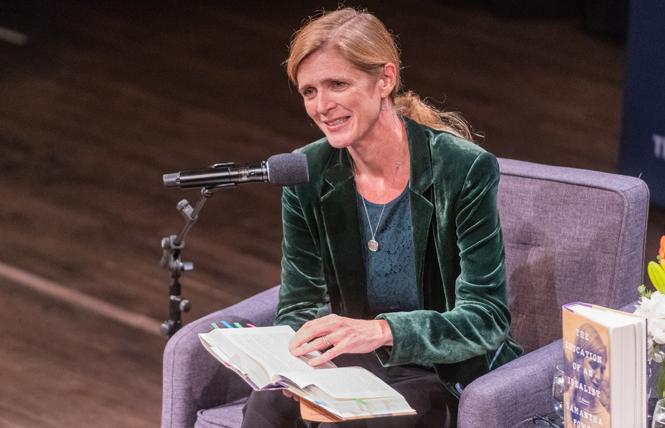 She was fully aware that many LGBT people were in attendance when she appeared at San Francisco's Herbst Theatre for a Commonwealth Club conversation with Dan Pfeiffer, co-host of the popular podcast "Pod Save America."

She was met with much applause for her work.

Power, 49, has been on a tour promoting her new book, "The Education of an Idealist: A Memoir."

The book chronicles her life and experiences leading up to, and through, the time she worked alongside President Barack Obama during his presidential campaign and later in his administration throughout his eight years in office.

Pathway to global equality
In a phone interview with the Bay Area Reporter Saturday, October 19, Power discussed the struggles she, Obama, and former Secretary of State Hillary Clinton faced standing up for LGBT rights on a global scale; criticisms; what she believed the administration accomplished; and the state of LGBT rights around the world in the age of President Donald Trump.

She said that the decision to promote protections for LGBT people at the U.N. was a "no-brainer" for Obama, and, in her mind, it was undeniably the right thing to do as Americans.
"The state of persecution of violence and harassment for LGBT people around the world was not enhanced by America ducking this issue," she said. Progress was being made at home, but abroad it was a different story.

"In so many parts of the world LGBT [people] were criminalized, were stigmatized, [and] were attacked with impunity from the attackers," she said, speaking about how in 2011, consensual same-sex relationships were criminalized in 76 countries, and in some of them punishable by death.

"I had this amazing platform of working for a president for whom this was a no-brainer: the idea that LGBT rights would be a part of our foreign policy," Power said. "He gave me license to think as creatively as I could about how to productively promote LGBT rights on the global stage."

Up to that point, the U.S., under the George W. Bush administration, hadn't been on board at the U.N., or anywhere, with a declaration to decriminalize homosexuality around the world despite, she said, 66 countries, including all 27 European nations, signing onto the declaration.

The first actions she took as an ambassador was for the U.S. to sign onto the declaration and to fight to retain sexual orientation in a resolution that would condemn extrajudicial killings.

Other governments were working in opposition to LGBT rights to systematize homophobia on an international level at the U.N.

"When other governments are also working within international institutions to institutionalized homophobia, there is no neutrality," Power said. "In the face of that you either fight or you don't fight."

Propelled by events
Throughout the book she highlights significant LGBT events that propelled her, and the Obama administration, to stand up on behalf of LGBT people around the world. Two key things were the brutal murder of Ugandan gay activist David Kato in 2011 and the gruesome executions of suspected gay men by members of Islamic State and the Levant and spectators on the ground who stoned them to death in 2015.

America wasn't going to stay silent or "roll over," she said, especially since it was American anti-gay right-wing activists who were "stoking vigilante violence."

Power addresses LGBT rights and the importance of the issue and actions she took as a U.S. ambassador and steps taken by Obama and Clinton to bring LGBT rights to the forefront of human rights globally in the book.

One passage she read to the September 17 audience from her Post-it tagged book was a story about the then-newly painted rainbow crosswalk at the entrance to the U.N. on 1st Avenue in New York. Power had worked with a committee and the city to have the sidewalk installed near the end of her tenure in 2016. At her last U.N. General Assembly dinner, she invited a friend, who was an unnamed foreign minister, to see the crosswalk after the meal. Despite their friendship she never asked him about his personal life, she read. It was in the middle of the night, without speaking the truth that they both knew and "what he could not advertise in his own country," she wrote. She described the look on his face when he came into the light as he crossed the street coming toward her, "It combined relief, delight, and deep calm. It was the look of someone being fully himself."

The moment demonstrated that the rainbow path leading to the U.N. may appear to be decorative, but it was much more than something pretty to walk across. It was a symbol of freedom and equality so many LGBT people around the world cannot live in due to harassment, violence, and even death from their family and neighbors to government officials.

A 'fine line'
However, in her book Power recognized the path she embarked on promoting LGBT rights around the world was a "fine line" to walk and one she consistently questioned. At times she expressed uncertainty about the best way to handle situations.

She saw the U.N. as the solution to empower LGBT activists around the world.

"It is far harder for the leader of a country that has criminalized LGBT status to taint advocacy on behalf of LGBT people in their midst as Western because it is the law of the world," said Power, pointing out that if a resolution passes through the General Assembly or the Human Rights Council, "It gives us a much sturdier leg to stand on."

Power explained that she and her team, headed up by David Pressman, a gay man who was the American ambassador to the U.N. for special political affairs, were highly aware of the fact that there would be a backlash. Pressman built a team of U.N. experts, many of whom were LGBT, to gain international legal protections and materials created at the U.N. that activists on the ground could use in their fight for equality in their countries.

The tools included empowering U.S. embassies around the world to protect and support local LGBT communities, prioritizing processing LGBT asylum seekers and refugee applications, and creating an LGBT rapporteur at the U.N. to help LGBT people work to achieve rights.

Most importantly, she said, it was critical for LGBT activists to be backed by the Obama administration.

"To throw the weight of the U.S. government behind their efforts, I think, that is something that once done can't be undone," said Power, even in the current climate under Trump's administration where "many of those individuals on the frontline feel dauntingly alone."

Critical of Trump, Power flatly stated in response to his tweet that he would decriminalize homosexuality around the world this year, "One tweet does not a policy make.

"An announcement is not policy," she added, referring to his statement before the U.N. General Assembly in September. "There's no follow through at all at our embassies."

That's unlike when Obama condemned Kato's murder and the killings of five LGBT Honduran activists in 2011. Back then, U.S. Ambassador to Honduras Lisa Kubiske followed up with Honduran officials who created a special unit to investigate and prosecute perpetrators of hate crimes against LGBT people in the country, Power noted in her book.

"There is no credibility for this administration to follow through on one tweet by the president that was then contradicted by what the administration as a whole is doing," she said, in terms of stripping LGBT people of their rights here in the U.S.

"Demigods are going to do what demigods do, but from our conversations with the frontline activists it was actions at the U.N. that were greatly coveted," she added, because they gave the activists, "a tool to use on their own invoking a sense of a higher law or at least a parallel law which had moved to a very different or a more progressive place than national law."

The Obama administration's legacy at the U.N. protecting LGBT rights can be used by LGBT activists to fight for their own rights no matter who is in power in the U.S., she expressed.

"It is a tool - an imperfect one for sure, but - that people who are being discriminated against or abused can invoke, and they didn't have that tool before. They only had their voices," said Power, pointing out that it's going to take more than one administration to bring about equality for LGBT people around the world.

To Power, promoting LGBT rights around the world is an important and lasting part of U.S. diplomacy.

"We've laid down a marker, which I hope will be embraced by our future administration," she said.