Arizona decision on religious exemption seen as narrow but 'dangerous' 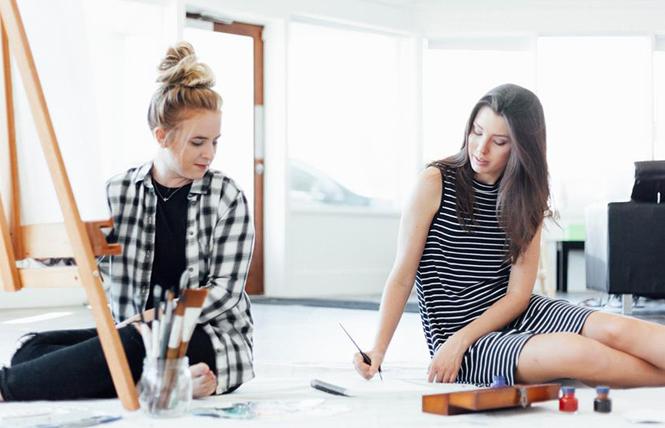 In a decision that LGBT legal activists call "dangerous" and "troubling," the Arizona Supreme Court September 16 ruled that a business can — under certain circumstances — cite the business owner's religious beliefs to claim an exemption from a city human rights ordinance and that the business can "post a statement" announcing its intentions to refuse service.

The ordinance in this case was the city of Phoenix's human rights law, prohibiting discrimination based on sexual orientation in public accommodations. It also prohibits companies from making public declarations that a customer is "unwelcome, objectionable, unacceptable, undesirable or not solicited" based on the customer's status.

Interestingly, Phoenix had not found the business, Brush & Nib Studio, to be in violation of its ordinance. And no same-sex couple had filed a complaint against the business. The case arose when the business owners, represented by the anti-LGBT Alliance Defending Freedom, initiated a lawsuit to challenge application of the ordinance to their business. The lawsuit also asked that the court rule that the business had a right to post a public statement to say it would refuse to create custom invitations for weddings of same-sex couples.

Brush & Nib owners Joanna Duka and Breanna Koski said that, because they are Christians and believe the Bible says only male-female marriages are acceptable, creating a custom wedding invitation for a same-sex couple's wedding infringes upon their right to freedom of religion. Their lawsuit was similar to other ADF lawsuits that have sought to undermine local and state ordinances prohibiting discrimination based on sexual orientation.

The lower state courts in Arizona upheld the constitutionality of the Phoenix ordinance but struck down the provision against a business publicly declaring some customers to be unwelcome.

But the Arizona Supreme Court, in a 4-3 vote, said Brush & Nib's refusal to create custom wedding invitations for same-sex couples amounted to "pure speech" and is protected by the U.S. Constitution's First Amendment.

The majority rejected the city's argument that refusing only same-sex couples is a proxy for discrimination based on sexual orientation.

"The city's concern that our decision will undermine the anti-discrimination purpose of the Ordinance, or that it will encourage other businesses to use free speech as a pretext to discriminate against protected groups, is unwarranted," said the majority. "... Nothing in our holding today allows a business to deny access to goods or services to customers based on their sexual orientation or other protected status."

The majority also stated that a business owner "need not prove that a belief is a central tenet of her faith" but simply prove that it is "based on a religious belief." And while the Brush & Nib Studio was established to profit, said the majority, "this does not mean that they cannot, like a religious organization or church, also further their 'religious objectives as well.'"

LGBT legal observers were critical of the decision.

"This ruling is dramatically at odds with decisions by courts across the country that have instead refused to create a religious license for businesses to exempt themselves from civil rights laws, and to pick and choose their customers according to their own religious criteria," said Jennifer Pizer, senior counsel for Lambda Legal Defense and Education Fund.

Pizer said the decision was "troubling" because it grants business owners a "license to discriminate" at least when they are creating custom designs and artwork. Pizer said other business owners hoping to skirt the non-discrimination law would "probably have to initiate their own case if they want to know whether they are free" to do so.

"So the city probably is weighing the unfortunate likelihood that there will be more litigation challenging the ordinance," said Pizer.

There's no word yet on whether the city is considering such an appeal, and Pizer said the city may "want to see what briefing is filed" in the U.S. Supreme Court on another ADF case, Arlene's Flowers v. Washington. ADF announced in June it would appeal that case to the U.S. Supreme Court. It filed the appeal September 11.

"Only the future will tell how broadly damaging this decision may turn out to be," said Shannon Minter, legal director for the National Center for Lesbian Rights.

"The facts here are unusual," he said, noting that Brush & Nib asserts that it "creates" the "artistic ideas" for its custom wedding invitations and its contract with clients stipulates that Brush & Nib "retains complete artistic freedom with respect to every aspect of the design's and artwork's creation."

"If the decision is confined to such businesses, it is not likely to have much effect. Most customers don't want to pay for the privilege of having their wedding be a vehicle for sending a business owner's message, and not many businesses are likely to set themselves up in that way," said Minter. "That said, the reasoning in the decision goes further and at least appears to open the door to potentially sweeping new exemptions to anti-discrimination laws that might be invoked by any kind of business in order to justify discrimination on just about any basis.

"We can hope that the lower Arizona courts will interpret this dangerous decision narrowly, as they should," said Minter, "rather than allowing it to usher in an unprecedented era of court-approved discrimination."

Starling took the place of Chief Justice Robert Brutinel (a Republican appointee), who recused himself from the case without comment.