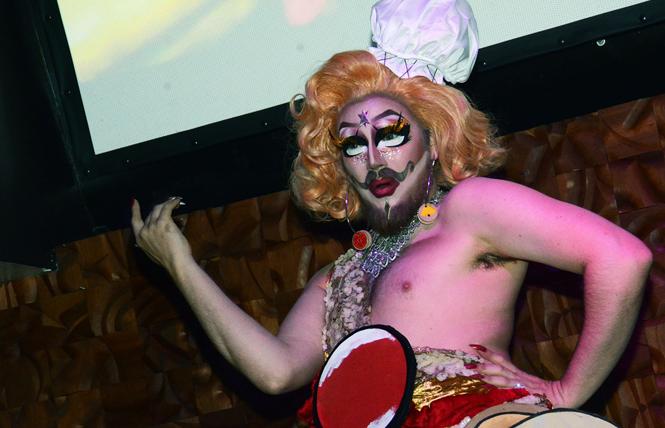 What is a drag performer or performance worth? The question is at the heart of a movement, still in its infancy, to set a minimum booking fee for drag queens and kings in the Bay Area.

In June, San Francisco-based drag queen Alexis Atauri posted a petition to the website www.coworker.org calling on the region's bars, clubs, and other employers of drag entertainment to pay performers "at least" $40 for a two-hour show with a maximum of two numbers. If the drag performer's pay is based on tips, then the petition calls on venue owners to make up the difference if the person falls short of $40 from the audience.

"We want a fair return on our labor," wrote Atauri. "This is no different from dancers, makeup artists, hair stylists, and other artists. We want employers to take us just as seriously when requesting our services so that we can establish and sustain good working relationships, and quality performances for customers to keep coming back."

The petition had garnered 1,991 signatures as of August 6, just shy of its 2,000 goal. It is the first step toward creating a nonprofit organization that can provide resources to the local drag community, Atauri explained in an interview with the Bay Area Reporter.

"The big reason why I landed at this petition is I have had wonderful experiences working with all these professional, hardworking artists but was heartbroken our labor is not adequately dignified with correct compensation," said Atauri, 31, who is transgender and nonbinary.

Since they started performing in drag in 2016, Atauri has seen a broad disparity in the compensation they have been offered, from zero dollars to $60 for performing at a bar to as much as $500 for one number at an event.

"The pay scale is all over the place; it depends on the bar and producer of the show," said Atauri, who asked that their given name not be published as the pay initiative has been met with some criticism and was concerned about being harassed at their non-drag job.

Their intention is not to shame venue owners or promoters with the petition, explained Atauri. They do not envision creating a union for drag performers, or requiring signed employment contracts. Rather, they want to promote those venues that are fairly compensating drag performers and other staff involved in putting on drag shows, perhaps through a sticker or sign that can be posted by the bar or nightclub to alert patrons they offer a fair wage.

"There won't be any signed agreements, like you find in a union-business relationship. The enforcement is creating a positive encouraging culture rather than shaming and putting people on blast — at least for this petition," Atauri told the B.A.R. "We have nothing finalized, but we are thinking about making window stickers or signs to give bars to display at their discretion, to let performers and audience members know that they value the drag entertainment at their establishment."

Costs of doing drag
Michael Trung Nguyen, 37, a gay man who performs in drag as Juicy Liu, is also supportive of the goal behind the petition. Ever since being crowned Miss GAPA 2016 he has seen how hard it can be for drag performers, especially performers of color, to break into the local drag scene and make a living from performing.

"It is costly, so I do agree with the overall spirit of the petition. There needs to be more of a standard for how drag performers are paid," said Nguyen. "It is sort of a Catch-22 thing if you can't do it unless you can pay for it. Once you get paid for it, you want to keep doing it."

Last August, Nguyen launched his own showcase for drag queens and other performers of color the fourth Thursday of the month at Castro gay bar the Lookout. Called "Juicy Thots," Nguyen set out to pay performers well, with those doing one number earning $40 and those doing two numbers receiving $80.

"It is in line with that petition. It just happened to be I was already doing it," said Nguyen, who takes home whatever is left over from the door, as there is a $5 cover charge. "My intention, again, for this show is not to make a bunch of money. It is to create a showcase for trans and people of color performers and have it in the Castro."

In light of the conversation the petition has sparked, Isaac Soria, whose drag queen persona is Cassi De La Cunt, approached the owners of Ginger's, a gay bar in San Francisco's financial district, about increasing the budget for his drag show he hosts there on Thursday nights called "C U Next Time." When he first launched the weekly show, which has no cover charge, he wasn't able to pay the performers, who worked for tips.

In June, having built up a customer base, Soria began paying his show cohosts $30 and performers $15 for two numbers for the night. They also get to keep their tips. Come September he is bumping up both pay rates by $5 and is aiming to increase it more soon after.

"As the show has continued to grow, I pushed myself to ask the bar to get a bigger budget," said Soria, 30, a gay man who started performing in drag four years ago in New York City.

Fully supportive of the petition launched by Atauri, who has performed at his show, Soria said there has been some confusion that it's calling for the creation of a union to represent drag performers.

"The goal is for venues to pay more equally and for performers getting paid fairly," he said. 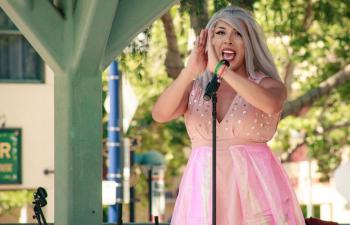 East Bay drag queen Bella Aldama was compensated for her performance during the Pride in the Plaza event in Concord in June. Photo: Courtesy Rainbow Community Center

Nonprofit issue
One of the more controversial positions Atauri espouses is that nonprofits should compensate drag performers when they book them to perform at their events.

"I stand firm you should properly budget for all sources like catering and entertainment," they said. "Drag queens and kings are entertainers. You are asking us for our art and resources so you should compensate us."

Since coming on board in the spring as the executive director of the Rainbow Community Center in Concord, Jack Rednour-Bruckman has made sure any drag performers booked for the LGBT center's events are paid. A performer themselves in a band, Rednour-Bruckman believes entertainers deserve to be compensated for their time unless they are donating their services for a charitable cause.

"First and foremost, I believe in paying people for their time," said Rednour-Bruckman, who signed on to Atauri's petition after being asked about it. "When a nonprofit is going to ask folks to volunteer, for food and what have you, I have no problem asking a caterer to give us a discount or write it off as a tax deductible donation."

As for performers, the center compensated those who took the stage at its annual Pride event in June and also pays those drag queens it asks to do readings for children.

"Especially for drag queens and drag kings, it takes time to get ready, and if someone asks you to haul yourself to some stage at 11 a.m. in the morning I am going to pay you," said Rednour-Bruckman. "I come from a performance perspective and am not going to ask anybody to do something for free."

Nguyen, who started out doing drag to raise money for the gay softball league and other nonprofits, doesn't believe there needs to be a rule governing what drag performers should be paid at charitable events. He thinks it should be up to the individual to decide if they are going to ask to be paid or donate their time. The size of the event should also be factored in, he said, such as whether it is a beer bust benefit at a local bar or a costly gala.

It is just one of the issues Atauri hopes their petition is bringing greater awareness to and can be addressed by their nonprofit, to be called Bay Area Drag (BAD) Resources. They are hosting a $15 beer bust benefit from 4 to 8 p.m. Saturday, September 21, at the Lone Star Saloon, 1354 Harrison Street in San Francisco, to raise money for it.

To read the petition, visit https://www.coworker.org/petitions/no-pay-is-a-drag-sf-bay-drag-employers-set-a-min-booking-fee

Updated, 8/9/19:Drag performer Holden Wood has been removed from this story.