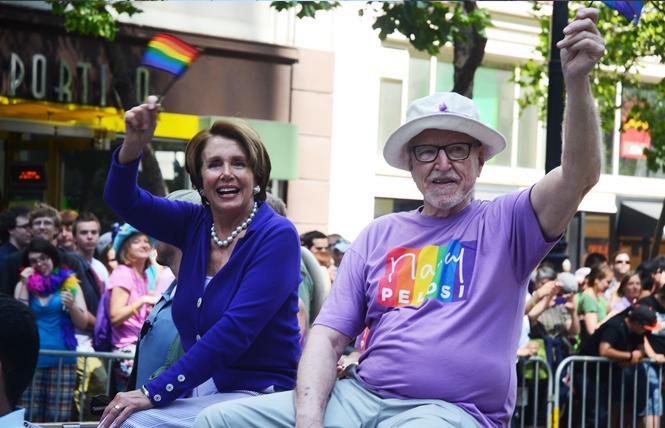 Twelve years ago House Speaker Nancy Pelosi (D-San Francisco) infuriated the LGBT community by supporting the strategy to strip transgender protections out of the Employment Non-Discrimination Act so that the federal legislation only covered sexual orientation.

Since the votes in the House were lacking if ENDA included gender identity, Pelosi sided with gay former Congressman Barney Frank and others calling for a pared-down bill and arguing it could be amended later to cover transgender people. The House passed it November 7, 2007, but it went nowhere in the Senate.

The decision would haunt Pelosi in the intervening years, as attempts to send a fully inclusive ENDA to the desk of the president would die in one or both legislative chambers. In 2010, Pelosi further angered LGBT advocates when she decided to prioritize repealing the ban on gays and lesbians serving openly in the military over holding a vote on a fully inclusive ENDA.

Locally, the dithering on ENDA cost Pelosi support among her more progressive LGBT constituents. It became a line of attack in her re-election bids by her detractors, though in liberal San Francisco her electoral success was never in doubt.

With time, ire over Pelosi's ENDA stance began to fade away, especially as she racked up legislative wins during the Obama era with the passage of the Affordable Care Act and the repeal of the military's homophobic "Don't Ask, Don't Tell" policy. And after orchestrating the Democrats' retaking of the House last year, Pelosi made it a top priority to pass the Equality Act, an even more expansive set of federal protections for LGBT people than ENDA would have provided.

The House passed the Equality Act last month, even though it has little chance of being voted on by the Republican-controlled Senate this year or next. Nonetheless, for many LGBT advocates it marked Pelosi's coming full circle since the fight over ENDA.

Gabriel Haaland, a transgender man and labor leader in the Bay Area, remarked how similar the political landscape was for both House votes on ENDA and the Equality Act, with Republicans in the Senate and White House clearly opposed to the bills.

Over the years Haaland joined in pickets outside of Pelosi's office and was arrested at street demonstrations over the ENDA issue.

"People make mistakes and they grow and you have to give them room to grow," he noted. "That doesn't mean you don't hold them accountable, right?"

He pointed to Pelosi's and other Democrats vocal opposition this year to President Donald Trump's move to ban transgender people from serving in the military and a number of congressional members, some from more conservative states, displaying the transgender flag outside their Capitol Hill offices.

"The more Trump bears down on it, the more understanding people have on transgender people's issues. Look at the backlash happening around Trump over transgender rights. He has declared war on the trans community," said Haaland. "I definitely think (Pelosi) has changed and, as she changes, support for her grows."

Like Haaland, gay former San Francisco supervisor Bevan Dufty told the B.A.R. that he never felt Pelosi was leading the charge for an exclusionary ENDA, rather it was Frank and former leaders of the Human Rights Campaign, as the national LGBT rights group backed putting the non-trans version of the bill up for a vote in the House.

In addition to Pelosi championing the Equality Act this year, Dufty believes she built up a reservoir of good will by working with local Democrats last year to fund, for the first time, a San Francisco office aimed at electing the party's House candidates in districts around the country.

"I think it opened up a strong relationship between her and some of the progressive leaders in San Francisco," said Dufty, now president of the elected regional BART transit agency board.

Not everyone is ready to completely move beyond Pelosi's handling of ENDA. Gwendolyn Ann Smith, a longtime transgender columnist for the B.A.R., believes the issue still lingers.

"I understand that Pelosi, even though she talks a good game, is really a pragmatist to a fault. She'd rather be wrong and win than be right and lose. Unfortunately, it is people like me who get to bear the brunt of that attitude," wrote Smith in an emailed reply. "One of the most frustrating things about Pelosi is that, even when she does good, solid, progressive things, she is still willing to pull back to less risky waters. We saw that with her support over ENDA and we're seeing that today. Her going to bat on the Equality Act is easy, because she knows it is going nowhere in the Senate. I think we'd see her true colors if something was actually on the line."

Asked about this year's vote making amends for her past actions on ENDA, longtime Pelosi spokesman Drew Hammill told the B.A.R. that she takes pride in the fact that every member of the House Democratic Caucus voted for the fully inclusive Equality Act.

"During the last majority, Democrats made remarkable progress for LGBTQ Americans, passing the historic, fully-inclusive hate crimes protections and sending the hateful 'Don't Ask, Don't Tell' policy to the dustbin of history," stated Hammill, one of a number of gay Pelosi staffers. "Since the failure of a fully-inclusive ENDA to advance through committee in 2007, LGBTQ and allied communities have been critical partners in our success overturning the bigoted Defense of Marriage Act and ensuring marriage equality for all Americans."

In May, added Hammill, "House Democrats were proud to pass the landmark Equality Act, leap-frogging over the incrementalism of ENDA, to finally, fully end discrimination against LGBTQ Americans, not just in the workplace, but in everyplace."

Today, it is Pelosi's reluctance to start impeachment proceedings against Trump or her support for centrist Democrats in certain districts that is far more likely to vex local progressives. As for ENDA, it is rarely mentioned, said several members of the progressive Harvey Milk LGBTQ Democratic Club.

Milk club board member Jackie Thornhill, 22, told the B.A.R. she was unaware of Pelosi's role in the ENDA debate until last year when she was doing research on her legislative record while working on the campaign of one of her opponents in the June 2018 primary. It came as a surprise, said Thornhill, who is a transgender woman.

"I believe that Speaker Pelosi has done a really great job of branding herself as an ally for the LGBTQ community," she said. "It is not for me to say if the community as a whole has forgiven her; I can only speak for myself."

Thornhill said she was happy to see the Equality Act passed, which she doubts would have happened if Pelosi hadn't become speaker again. Her main concern now is seeing that Trump is not re-elected.

"The thing for me is, as long as a Republican sits in the Oval Office and Republicans control the Senate, the Equality Act is just messaging," said Thornhill. "I support it and want to see it become law, and that will require removing Donald Trump from office."

Pelosi to march in Pride
Pelosi is likely to receive thunderous applause when she marches in this year's Pride parade taking place Sunday, June 30. It will mark her 14th appearance in the LGBT celebration since she was elected to the House in 1987.

"Speaker Pelosi is looking forward to participating in this year's Pride Parade as she does every year that she can," stated Hammill. "In terms of recent years, the speaker has participated in the parade all but one year since 2013."

She will also be the keynote speaker that morning at the annual Pride Breakfast held by the Alice B. Toklas LGBT Democratic Club. The club is "beyond honored," said co-chair Gina Simi, that Pelosi accepted its invite.

"Quite frankly, she is speaker of the House so why wouldn't we want her? I cannot think of anyone better to speak to us than Nancy Pelosi," said Simi when asked why Alice leaders sought to have her speak this year. "She has been a fighter for us long before it became cool and there were rainbows all over the city. She is our biggest champion and our strongest ally."

The club also secured U.S. Senator and presidential candidate Kamala Harris (D-California), who also will be marching in the Pride parade, as an honored guest at this year's sold out breakfast along with Lieutenant Governor Eleni Kounalakis.

Newsom to make history at SF Pride
California Governor Gavin Newsom is set to make history as the first sitting governor to march in the San Francisco Pride parade. As the B.A.R. reported online June 19, Pride organizers confirmed that none of the state's governors over the last five decades had participated in the LGBT celebration.

According to a number of LGBT officials, they believe Newsom's appearance in the parade will be the first time the state's governor has marched in any of the Pride parades held in the Golden State.

As a former mayor of San Francisco and onetime member of its Board of Supervisors, Newsom has been a regular participant in the parade, which is marking its 49th anniversary this month. He also regularly had a Pride contingent while serving as the state's lieutenant governor.