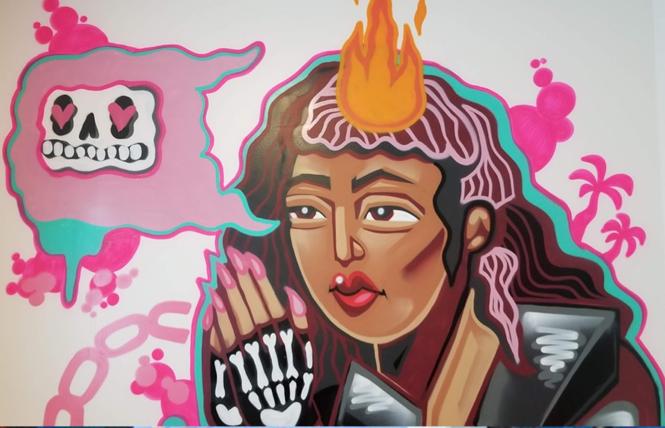 As co-working spaces proliferate across the Bay Area, they have gone from a utility to a symbol of wealth and status.

Now, a queer woman has opened one up in Oakland's Fruitvale neighborhood, envisioning affordable work spaces for women, LGBT folks, and people of color.

Homiey Fruitvale is described in a news release as a black, queer, and woman-owned co-working and event space. Newly opened in May, the space offers the usual amenities of co-working benefits: space and seating, Wi-Fi, and a kitchen stocked with snacks, coffee, and tea.

Homiey originated in Chicago, but founder Cobb thought another location could be particularly useful in East Oakland. They chose the Fruitvale area for its ease of access via BART, with a station just a five-minute walk away.

The Bay Area Reporter had a chance to tour the space with Cobb. It is sunny and well-lit and has seating capacity for 45 people. The choices in art are striking, with a large, bright-pink graffiti-style mural dominating one wall in the main space, and a vintage-looking functioning telephone booth that can connect to a cellphone to make a call. However, the aesthetic belies a serious ethic of affordability, and a desire to be an accessible space.

"Affordability is super important," said Cobb in an interview. "Co-working is typically a space where you don't see a lot of black and brown people. There's a lot of privilege associated with just being able to use a co-working space. I don't think that should be the case. Making something that's accessible in a neighborhood like Fruitvale is very important. This is a space to build not only your business, but also your confidence. This is a place that you can call your own."

Cobb's other job rents space with a well-known co-working company. They acknowledged the difference between that experience and the one they are trying to create with Homiey.

"I don't see a lot of people who look like me there," they said. "My job is genuinely committed to diversity, but co-working space just don't reflect myself to me."

Cobb said that right now, there is no charge for events. Co-working memberships are priced at different tiered levels, with starting rates as low as $5 per month.

Cobb is proud of the well-appointed living-room feel of Homiey, including a generously-sized backyard and the eye-catching soft pink facade of the building. Part of that feel will be made up by clients, Cobb admits. They detailed the changes that they've made since their soft opening, including music to break up the silence and holding interviews for potential members in the space.

"We want to meet people who want to come in. Not to be exclusive, but to be inclusive," Cobb said. "We want people to know who we are and what we're about before they decide to make a commitment to us."

Kelly Anneken, an Oakland comic and podcaster who declined to give her age, spoke with the B.A.R about her experience working with Homiey Fruitvale as an event space via email.

"I've been working with my friend and fellow comic, Alexandria Love, to find a space for CRUSH, a comedy open mic that's a safe space for women, nonbinary, and genderqueer comics to hone their craft in the East Bay," Anneken wrote. "From almost the second we met Ebonie, we knew Homiey was the right spot. They immediately understood that we weren't looking to turn a profit on this event, but to create and develop a community that wants to push stand up beyond the limiting cis-het male boundaries of the art form."