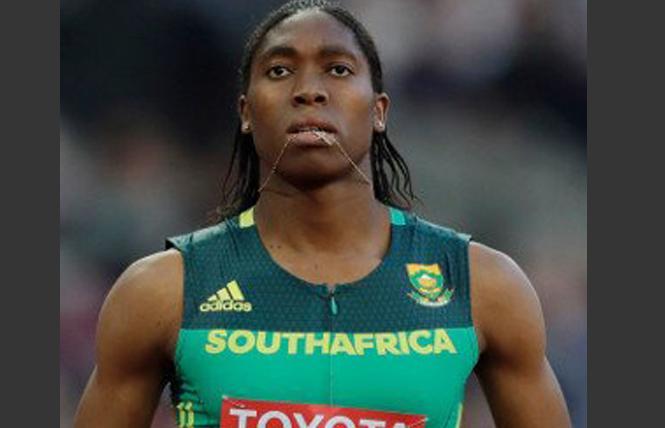 In a 2-1 ruling, a Court of Arbitration for Sport three-member panel ruled Wednesday that the international federation of track and field has the right to discriminate against female athletes who have naturally occurring high levels of testosterone.

The split decision effectively requires Olympic gold medalist Caster Semenya — as well as Olympic silver medalist Francine Niyonsaba of Burundi and other women track athletes with high testosterone levels — either to begin medically unnecessary treatments to reduce their natural hormones immediately, or be barred from competing in this year's world championships in Qatar.

The panel ruled May 1 that the proposed International Association of Athletics Federation's rule that barred female middle distance runners with naturally high testosterone in distance events from 400 meters to one mile was discriminatory but that "such discrimination is a necessary, reasonable, and proportionate means of achieving the IAAF's aim of preserving the integrity of female athletics."

"I know that the IAAF's regulations have always targeted me specifically," Semenya said in a statement via her attorneys. "For a decade the IAAF has tried to slow me down, but this has actually made me stronger. The decision of the CAS will not hold me back. I will once again rise above and continue to inspire young women and athletes in South Africa and around the world."

Semenya, 28, is a two-time Olympic gold medalist in the 800 meters. Initially she was awarded the silver medal in the 2012 Summer Olympics, but that was upgraded to a gold when Russia's Mariya Savinova was banned for life for illegal steroid use and was stripped of her medal. She has also run the 400 and 1500 in other competitions. The court ruling makes a suggestion that the IAAF drop the restriction for the 1500 because of lack of evidence to support it. IAAF gave no immediate indication it would adopt the court's suggestions.

"Today's divided opinion by the court of sports arbitration is cruel, unprincipled, and riddled with internal contradictions," Shannon Minter, legal director of the National Center for Lesbian Rights, said in a news release. "The court acknowledges that the rule requiring Caster Semenya, to alter her body in order to compete is discriminatory, will be difficult, if not impossible, to administer, and may subject Caster to dangerous side effects — and yet the court has allowed this shameful rule to stand. Caster is a woman and has earned her success. There is no justification for this intrusive and unworkable policy, which targets Caster based on racist and sexist stereotypes about how women 'should' look and behave."

The IAAF had tried a similar rule previously but lost a court challenge to that rule and was asked to come back with scientific support for the rule. Instead, IAAF proposed a new rule, removed the distance of the runner who had successfully challenged the rule, and restricted the races affected to those run by Semenya and a few other runners who also have differences in sexual development (DSD). What data they did submit found no performance correlation between testosterone levels and the distances they have applied the rule to; and several scientists have found and documented numerous errors in the data IAAF provided in its small sampling.

In its executive summary, the court wrote, "While the majority concludes that the DSD regulations are not disproportionate on their face, the panel highlights its serious concerns about aspects of the practical application of the DSD regulations when they are implemented. In particular, the panel expresses its concerns about the potential difficulty for an athlete in complying with the requirements under the regulations (including the possibility that affected athletes may inadvertently, and through no fault of their own, be unable consistently to maintain a natural testosterone level below 5 nmol/L).

"The panel also notes the paucity of evidence to justify the inclusion of two events (the 1500 meter and one mile events) within the category of restricted events," the court continued. "The panel strongly encourages the IAAF to address the panel's concerns in its implementation of the DSD regulations. At the same time, the majority of the panel observes that it may be that, on implementation and with experience, certain factors, supported by evidence, may be shown to affect the overall proportionality of the DSD regulations, either by indicating that amendments are required in order to ensure that the regulations are capable of being applied proportionately, or by providing further support for or against the inclusion of particular events within the category of restricted events."

The court also noted in its summary, "There can be no suggestion that Ms. Semenya (or any other female athletes in the same position as Ms. Semenya) has done anything wrong. This is not a case about cheating or wrongdoing of any sort. Ms. Semenya is not accused of breaching any rule. Her participation and success in elite female athletics is entirely beyond reproach and she has done nothing whatsoever to warrant any personal criticism."

The CAS's full finding and executive summary are available at the court's website, www.tas-cas.org.