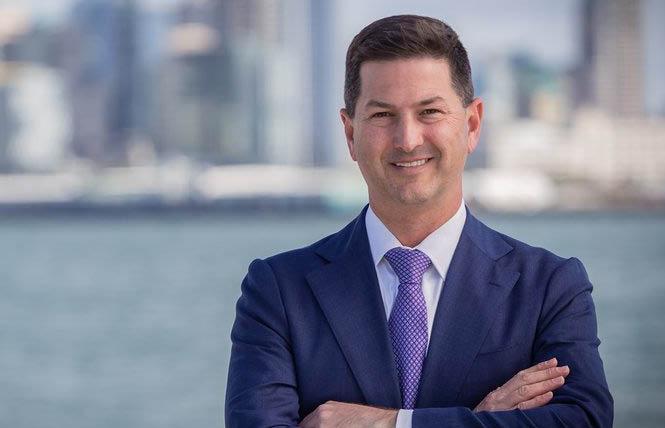 Gay San Diego Assemblymember Chris Ward has revealed he has COVID and is self-isolating at home this week to protect his family, staff, and others from also contracting the virus. It is believed he is the first member of the Legislative LGBTQ Caucus to publicly disclose he has tested positive for COVID since the pandemic began in early 2020.

Ward, a Democrat now in the second year of his freshman term, and his husband have two children. In a series of tweets early Wednesday evening Ward announced the news.

"Last weekend, I began experiencing a high fever, strong cough and a sore throat. After testing negative twice, I eventually tested positive for COVID," wrote Ward, who is expected to easily win reelection in November to his Assembly District 78 seat. "I'm at home recovering and staying isolated to protect my family and prevent further spread of the virus."

1/ Last weekend, I began experiencing a high fever, strong cough and a sore throat. After testing negative twice, I eventually tested positive for COVID. I'm at home recovering and staying isolated to protect my family and prevent further spread of the virus.— Assemblymember Chris Ward (@AsmChrisWard) May 12, 2022

He also disclosed that his symptoms were mild and encouraged people to get vaccinated and their booster shots if they hadn't done so already.

"While I'm still feeling ill, I'm thankful I'm vaccinated and boosted so the symptoms are milder than they normally would be," wrote Ward. "It's important to stay vigilant as another wave of COVID becomes dominant by masking up as appropriate and getting a booster shot when eligible."

According to the May 11 update from state health officials, Wednesday's average COVID case count over the last seven days was 6,214. It also emphasized that unvaccinated people are 5.4 times more likely to get COVID-19 than boosted individuals.

"Real-world evidence continues to show that the vaccine is preventing severe illness, hospitalization, and death," noted the advisory. "Public health officials urge Californians to get vaccinated and boosted as soon as possible."

Vaccination appointments can be made by visiting myturn.ca.gov or calling 1-833-422-4255. Additional information can be found here.

Currently the state is "strongly" encouraging people to wear masks "in most indoor settings." Masks continue to be required to be worn by everyone in high transmission settings like emergency shelters, health care settings, correctional facilities, homeless shelters, and long-term care facilities.

The board that oversees the Bay Area Rapid Transit system in late April approved a temporary mask mandate for riders in the paid areas of the system (including trains). The move was made after a federal judge struck down a nationwide mask mandate for public transit systems and airlines. BART's mandate is effective through July 18.

State health officials are no longer recommending quarantine for individuals who are exposed to COVID-19 and have no symptoms. But they are asking people who believe they have been exposed to COVID to get tested, call their health care provider, and stay home and away from others.

As for Ward, he said he plans to review Governor Gavin Newsom's May budget revise this weekend. Newsom is expected to release his revised 2022-23 state budget proposal at 10 a.m. Friday in Sacramento; it will be livestreamed on Newsom's YouTube page.

As the Bay Area Reporter first reported online May 5, a coalition of nonprofit service providers is seeking $105 million in state funding to address sexually transmitted diseases and the overdose epidemic among opioid drug users. It is expected that Newsom will not include the funds in his budget, but the LGBTQ caucus plans to champion the funding ask from the sexual health service providers when the Legislature takes up the budget.

"My staff is keeping our work on track for when I return, and I look forward to digesting the May Revise Budget later this week," wrote Ward. "In the meantime, I hope everyone stays healthy. This virus is still very real and we can't afford to let our guard down. Stay safe out there!"