Out in the World: 60 LGBTQ Afghan refugees arrive in Canada 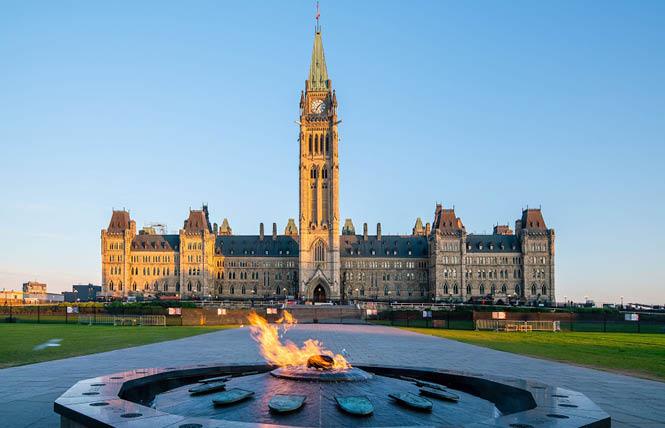 The Canadian government has quietly relocated 60 LGBTQ Afghan refugees from Pakistan to the North American country.

Afghan refugees flew out of Islamabad to Nova Scotia around April 30, according to gay Afghan American activist Nemat Sadat in a May 1 email announcing the resettlement effort. Most of the Afghan refugees were from a list of more than 1,000 queer Afghans he has been advocating for over the past nine months. Only one refugee, a transgender Afghan who spoke with the Bay Area Reporter, was represented by Rainbow Railroad, a Canadian LGBTQ asylum and refugee organization.

"The end of Ramadan and start of Eid proved to be a perfect cover in clearing out a large number of LGBT+ Afghans in Pakistan who were on my list and waiting for their resettlement to Canada," Sadat wrote in the email to the B.A.R. "I'm grateful that Canada is doing everything it can to help my people get a chance to restart their lives in a free and open society."

A 26-year-old Afghan transgender man on that flight who, for reasons of safety, identified himself with the pseudonym Ganish, spoke to the B.A.R.

Ganish said he left Afghanistan after being threatened and severely beaten by his own family members. The only member of the group being resettled in Canada who is affiliated with Rainbow Railroad, he stayed at a safe house in Islamabad, Pakistan's capital, for about eight months.

Ganish expressed joy and hope about being free now that he was in Canada.

"I feel like a free bird. I can fly anywhere. I can be myself. I can live the way that I always wanted to live," he said, adding, "I can live freely, and I don't have any fear that someone will beat me. I just feel relaxed, safe, and really good."

Members of Sadat's group did not want to speak to the media.

The government's Immigration, Refugees and Citizenship Canada office did not confirm the arrival of the 60 LGBTQ Afghans or respond to the B.A.R.'s request for comment by press time.

In the nine months since the Taliban took over Afghanistan in August 2021, Sadat has successfully resettled 82 LGBTQ Afghans. One in Ireland, eight people in the United Kingdom, two people in France, 12 in Germany, and now 59 in Canada. The recent effort was the largest movement of the 1,085 people he has been working to get to a safe country.

That doesn't include about 200 queer Afghans who have been able to get out of Afghanistan, but are stuck in Abu Dhabi, Iran, India, Greece, Pakistan, and Turkey, he said, emphasizing that they are still not safe. Sadat shared a video with the B.A.R. of a transgender Afghan refugee who was stabbed multiple times by Iranian police for sleeping in a park. He was able to find a host for the refugee but he said he needs to get them and others out of Iran as soon as possible.

"I'm worried about them. How can we get these people out?" he asked, stating that the U.S. government has ghosted him. He hasn't received responses from any of the members of Congress who responded to him at the beginning of the crisis within the last several months, he said.

Sadat has grown more critical of President Joe Biden's administration as the months drag on and other crises, such as Russia's invasion of Ukraine, create another mass refugee situation. He perceives the U.S. as forgetting about Afghanistan and the LGBTQ Afghans left behind under Taliban rule.

LGBTQ Afghans have been fleeing the country since the Taliban reclaimed rule of the Central Asian country.

Homosexuality is criminalized under Islamic Sharia law. Taliban and vigilante groups, using a list of known LGBTQ Afghan activists to hunt them down to blackmail or execute them, have made headlines during the last year. Reports of families and communities turning queer people in to the Taliban have also been reported.

Rainbow Railroad granted Intervener status at Canada's Supreme Court
Canada's Supreme Court granted Rainbow Railroad Intervener status in the upcoming Canada-U.S. Safe Third Country Agreement appeal. Intervention is when a group or person who is not an original litigant, but has interests in a proceeding, is allowed to intervene against the plaintiff, defendant, or both.

This is the first time in the Canadian LGBTQ asylum and refugee organization's history that it will appear in front of the nation's highest court, according to a May 6 news release.

Rainbow Railroad was founded in 2006 to assist LGBTQ people to escape persecution in anti-gay countries and resettle them in LGBTQ-welcoming countries.

Rainbow Railroad will submit a 10-page written factum and five-minute oral argument before the court as part of its intervention in the case, Canadian Council for Refugees, et al. v. Her Majesty the Queen, at the upcoming hearing.

The case challenges the Canada-U.S. Safe Third Country Agreement on the basis of the Canadian Charter of Rights and Freedoms Sections 7 and 15, according to the release.

Section 15 of the Charter states that all people in Canada, regardless of race, religion, national or ethnic origin, color, sex, age or physical or mental disability, are to be treated with the same respect, dignity and consideration, while Section 7 guarantees the right to life, liberty and security of the person, and the right not to be deprived of these except in accordance with the principles of fundamental justice.

Rainbow Railroad argued that the law directly impacts the organization's work and the safety of LGBTQI+ asylum seekers and migrants.

"LGBTQI+ persons face unique challenges, threats, and persecution in the refugee claims process," stated Rainbow Railroad Executive Director Kimahli Powell. "What one country deems a 'safe' third country may not actually be safe for LGBTQI+ people, violating their international right to claim asylum. In particular, we are concerned that the safe third country agreement could lead to LGBTQI+ members being deported to their home countries where their safety can be in jeopardy."

The organization is being represented in court by Michael Battista, partner at Battista Smith Migration Law Group in Toronto. Battista was the founding Rainbow Railroad board chair.

"This case raises constitutional and international law issues regarding access to safety for LGBTQI+ refugees," he stated.

Canada currently has a backlog of more than 110,000 refugee applications, according to the release. Rainbow Railroad claims that the backlog is exacerbated due to barriers, such as the Canada-U.S. Safe Third Country Agreement.

According to the organization, it received requests from more than 8,450 LGBTQI+ individuals seeking help from the organization from around the world in 2021. Among those requests, 83 came from refugees stuck in the U.S. waiting for support.

The organization argues that the "high standards" required by the agreement "are not being met," stated Powell.

US appeals court gives gay Nigerian another shot at asylum
A three-judge panel of the 9th U.S. Circuit Court of Appeals has unanimously remanded a gay Nigerian asylum seeker's case back to the Board of Immigration Appeals for reconsideration.

Circuit Judges Sidney Thomas and Margaret McKeown, and visiting U.S. District Judge Donald Molloy of Montana, decided May 4 that the board's reason for denying asylum to Peter Udo was "ancillary" to his claims and "certainly not a material element." Visiting judges are occasionally called upon to sit on courts outside their usual jurisdiction.

They returned the case, Udo v. Garland, 9th U.S. Circuit Court of Appeals No. 20-70078, to the immigration board to reconsider Udo's claims.

Reuters reported that the board denied Udo's testimony and evidence about the location of the hotel where he and his boyfriend were caught having sex by an employee in 2015. The employee told others what he saw, which led to the couple being brutally beaten and detained by police. Udo managed to escape detention and fled to the United States, where he claimed asylum.

Homosexuality is illegal in Nigeria. Those who are convicted face a maximum sentence of 14 years in prison or stoning to death under Sharia law. In 2014, the country passed the Same-Sex Marriage (Prohibition) Bill prohibiting same-sex marriage and public displays of affection and voided recognition of same-sex marriage. The act even punishes people who assist with a union or witness unions.

The immigration board believed that Udo's claim was "frivolous," claiming that he made up the key element in his testimony and failed to prove he was gay.

Individuals' asylum applications that are deemed frivolous are usually permanently barred from ever seeking immigration relief in the U.S., Reuters reported.

Gay Chileans to shape the country's new constitution
LGBTQ Chileans have a seat at the table in reshaping the future of the South American country.

Chileans elected 155 people to the Constitutional Convention in May 2021. Gaspar Domínguez, 33, was one of eight LGBTQ people elected to the constitutional body. He was appointed the convention's vice president in January.

Dominguez, who is gay, told the Washington Blade that Chile's historic and profound political transformation "opened many doors." One of them "was to recognize that people of sexual diversity are citizens, that we need to participate and represent ourselves in politics."

Chile has undergone many changes within the last decade. Among rights won, the country passed hate crime and anti-discrimination protections for LGBTQ people following the 2012 murder of Daniel Zamudio. Last year, the country ushered in marriage equality. Weddings began in March.

"It is a tremendous opportunity for the LGBTQ+ community in Chile and certainly in the world," Dominguez told the Blade.

However, four police officers on trial for the murder were acquitted in a split 4-3 majority decision.

Dimopoulos and Hortarias were given 10-year custodial terms. Dimopoulos will be allowed to serve the sentence at home due to his age.

Agence France Presse reported activists in the courtroom shouted out "disgrace" when the judgment was announced.

Hundreds of demonstrators took to the streets of Athens protesting the verdict, calling his murder an "assassination," reported Pink News.

In September 2018, Kostopoulos, a prominent HIV-positive queer activist, drag artist, and columnist, was beaten to death in broad daylight as cameras captured Dimopoulos, Hortarias, and the four officers brutally attacking him in central Athens. Kostopoulos died from his injuries before he got to the hospital.

The Kostopoulos' family's lawyer, Anny Paparousou, told reporters in a statement that the verdict represents Greece's "tradition of police violence never being punished even by our courts." She welcomed the guilty judgments of the other two defendants.

"We are disappointed and opposed to the four officers being set free when we have documented evidence of their participation in the crime," she said.

Kostopoulos's family and their lawyer have not yet said whether they plan to appeal the judgment to the Greek Supreme Court, reported Pink News.

Out in the World: Gay Bay Area Ukrainian American rallying support for LGBTQ community during Russian invasion
Sign up!