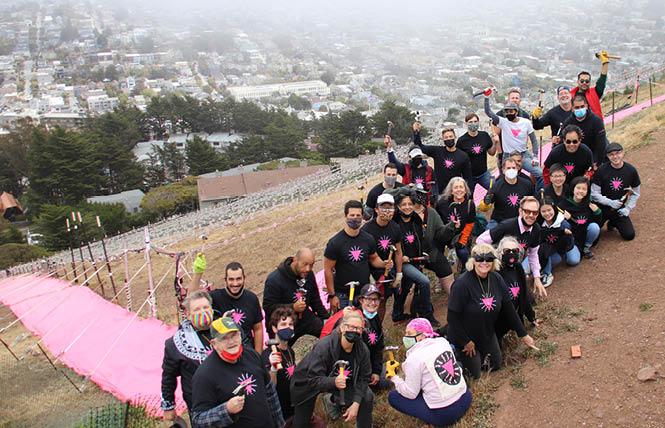 The annual pink triangle installation atop San Francisco's Twin Peaks is going to be a little different this year, and volunteers are being sought to help out.

While the pink triangle is planned to be on display the entirety of June for Pride Month and will be lighted at nighttime as was the case last year, its daytime presence is being changed, Patrick Carney, co-founder of the project, stated in an email.

Instead of the pink tarps that have traditionally been used, Carney stated that this year there will be more than a mile of bright shiny pink streamers that will be hung in rows below each of the 43 rows of LED light strands, as well as hung on the three sides of the triangle. "The pink streamers won't be flat on the ground, they will be up in the air," Carney stated. "The layers of hanging 10-inch long streamers may appear as fringe, like the Roaring 20s Art Deco fringe flapper dress." As the streamers blow in the wind, the shiny surface will lightly reflect and sparkle over the city.

"It should be dragalicious," Carney noted.

The lights will take over as darkness descends on San Francisco, ensuring that the symbol remains visible day and night.

Burning Man's Velvet Cabal, a collective of LGBTQ camps at that event, will be helping to install the LED lights, Carney stated.

It will be illuminated by the nonprofit Illuminate, the arts nonprofit behind the Bay Lights installation on the San Francisco-Oakland Bay Bridge. Ben Davis, founder and chief visionary officer, will direct the project.

The sailcloth borders will be installed Saturday, May 28, starting at 9 a.m., and the streamers will be placed Sunday, May 29. The take down will start July 1. Volunteers can sign up here.

This year's lighting ceremony will take place Wednesday, June 1, at 8 p.m. It will be preceded by the pink torch procession that will start at Oakland City Hall with Mayor Libby Schaaf and make its way escorted by members of Dykes on Bikes to San Francisco Mayor London Breed for the lighting. Cheer-San Francisco, the city's official cheerleading team, will assist in the procession.

Carney noted that the pink triangle is a reminder and a warning. It was originally used to brand suspected homosexuals in Nazi concentration camps. It was revived in the 1970s as a symbol of protest against homophobia, and has been used to symbolize LGBTQ+ Pride ever since.

People interested in donating to help support the installation can do so here. 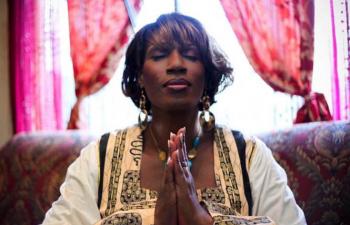 Trans activist to virtually address Marin City church
Transgender activist Dee Dee Chamblee will be the guest speaker, via Zoom from Atlanta, Sunday, May 15, at 11 a.m. at St. Andrew Presbyterian Church, 101 Donahue Street in Marin City in the North Bay.

Chamblee is an advocate and educator within the trans community and has more than 25 years of grassroots organizing experience, a news release stated. She is the founder and director of La Gender Inc., which empowers the trans community on issues such as HIV/AIDS, homelessness, police profiling, and systemic discrimination in employment, a news release stated. In 2011, then-President Barack Obama honored Chamblee as a "Champion of Change" and her Trans Equality blog was featured on the White House's website, the release noted.

St. Andrew Presbyterian Church is a multicultural congregation that welcomes everyone. It has a long history of civil rights and social justice activism. For more information and to access the upcoming worship service, click here.

Author Gomez honored by NBJC
Lesbian author and San Francisco resident Jewelle Gomez will be one of several Black LGBTQ and same-gender loving women and feminine elders honored by the National Black Justice Coalition during its virtual Wisdom Awards Monday, May 16, at 10 a.m. Pacific Time.

The event is being held in recognition of National Honor Our LGBT Elders Day and will honor the women for their contributions to America's literary and communication arts traditions.

Gomez, who was involved in the fight for marriage equality in California, is best known for her 1991 classic "The Gilda Stories," which won two Lambda Literary Awards for fiction and science fiction. She also previously served on the San Francisco Library Commission.

In addition to Gomez, other honorees are: Sheila Alexander-Reid, former director of Washington, D.C. Mayor Muriel Bowser's Office of LGBTQ Affairs; Ann Allen Shockley, author of "Loving Her," (1974) the first novel with a Black lesbian protagonist; Cheryl Clarke, a poet and co-owner of Blenheim Hill Books in Hobart, New York; and Anita Cornwell, who in the 1950s became one of the first lesbians to be published in The Ladder and The Negro Digest.

Also being recognized are Andrea Jenkins, a trans woman who's president of the Minneapolis City Council; Rayceen Pendarvis, a host and emcee of many events in the Black LGBTQ and same-gender loving communities; Barbara Smith, an architect of Black lesbian-inclusive feminism; and Linda Villarosa, an African American journalist, author, and educator.

LGBTQ older adults to be recognized
The Center for LGBTQ Health Equity will also have a program on National Honor Our LGBT Elders Day May 16.

The day of celebration will take place virtually with videos, stories, and retrospectives on the National Honor Our LGBT Elders Facebook page.

Videos can be submitted here.

First up is the Call of the Wild Weekend May 14-15. The two-day, family-friendly community open house will include activities that celebrate London's love of nature, storytelling, and music, a news release stated.

All visitors that weekend will receive free admission to the park, normally $10 per vehicle with up to nine passengers, according to the release.

Sunday is also Family Adventure Day, which includes a guided stroll through Beauty Ranch with a naturalist; and a visit with "bubble scientist" Ron Schultz, who will give kids a chance to create giant bubbles of their own.

For more information and to register for free tickets, click here.

The following weekend, May 21-22, visitors can wander the park grounds with a classical music soundtrack performed live by pianist Hunter Noack in the Beauty Ranch Meadow.

Founded in 2016, "In A Landscape: Classical Music in the Wild" is an outdoor concert series with stunning landscape replacing the traditional concert hall. A nine-foot Steinway grand piano travels on a flatbed trailer to state and national parks and other venues for concerts to connect people to each landscape, a release stated.

The concerts will be performed from 6 to 7:30 p.m. both evenings. Attendees are encouraged to arrive early and bring a picnic and favorite beverage, plus lawn chairs or blankets to sit on.
Tickets to this event are $35. The park entry fee of $10 is not included.

Updated, 5/12/22: The pink triangle item has been updated to include participation by Illuminate.