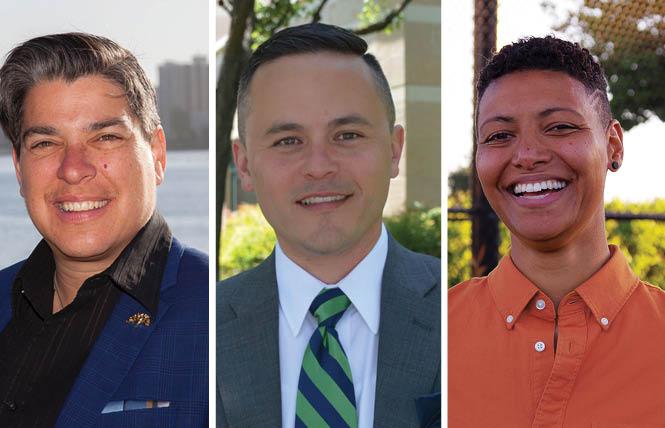 LGBTQ candidates across the country are capitalizing on the news of a draft ruling that would overturn abortion rights in the U.S., first reported on by Politico May 2. Most have used it to raise funds for their campaign coffers, while others have used it as a cudgel against their Republican opponents.

Deja Alvarez, running to become the first openly transgender Latina member of the Pennsylvania House of Representatives, quickly fired off an email May 3 to her supporters recommitting to "never stop fighting to protect reproductive healthcare for all bodies" and urging people to donate to her campaign. Her primary race will be held next Tuesday, May 17.

"After seeing the leaked Supreme Court opinion, it is clearer than ever that we must elect more women to office. It is literally our bodies on the line and we can not continue allowing men to control them," wrote Alvarez, who is seeking who to represent the 182nd District in the heart of Philadelphia.

Fellow Keystone State candidate Sean Meloy, a gay man running for Pennsylvania's 17th Congressional District seat in the Pittsburgh region, also fired off a fundraising pitch based off the leaked ruling with the donations to be split between his campaign and the National Abortion Rights Action League.

"We need more pro-choice champions in office, people who are not afraid to talk about what's at stake. Because what's at stake is peoples' lives," wrote Meloy, formally the LGBTQ Victory Fund's vice president of political programs. "Let me be clear: overturning Roe will outlaw safe, accessible abortion taking place in doctor's offices. It will not stop abortions from taking place for those who need it most."

As she nears her state's Democratic Party primary May 17, lesbian Oregon U.S. House candidate Jamie McLeod-Skinner is using the pending ruling in the federal case Dobbs v. Jackson Women's Health as another way to paint her opponent, incumbent Congressmember Kurt Schrader (D-Canby), as too conservative for voters in the state's newly drawn 5th Congressional District. In a May 4 email her campaign pointed supporters to an op-ed written by Terry O'Neill, former president of the National Organization for Women, that criticized Schrader for his record on protecting women's right to choice their own health care.

The fundraising appeal on behalf of McLeod-Skinner, who formerly served on the Santa Clara City Council in the South Bay, argued, "She is the only real pro-choice, pro-family, pro-women candidate in this race."

Gay former federal prosecutor Will Rollins also jumped on the news to once again remind voters in California's new 41st Congressional District, which includes a large part of the Palm Springs area, of the conservative record of the man he wants to oust from office come November, Congressmember Ken Calvert (R-Corona). His campaign has highlighted Calvert's A+ rating from anti-abortion group the Susan B. Anthony List and has painted him as "one of the strongest allies of the anti-choice movement."

"Voters in Riverside County should ask Rep. Calvert not only why he believes women don't deserve the same reproductive freedom as men, but how he plans to pay for hundreds of millions of new, government-mandated pregnancies if he gets his wish for total control of American women and their bodies," stated Rollins, of Canyon Lake, California, in a May 3 news release. "Voters also need to know just how dangerous Rep. Calvert's record is on women's rights: he's not only tried to overturn Roe, he believes that rapists should be permitted to sue doctors that provide abortion care to child victims of incest, and he voted against a bipartisan law that made it illegal to barricade abortion clinics."

Gay progressive Democrat Derek Marshall is also taking advantage of the issue as he seeks to oust from office Congressmember Jay Obernolte (R-Hesperia) in the 23rd Congressional District seat in the High Desert area east of Los Angeles. Marshall spoke at a Reproductive Rights Rally Saturday held in Victorville where he lives, while his campaign has been pointing out Obernolte has a 100% rating from the National Right to Life Council.

"Make no mistake, abortion is healthcare," stated Marshall. "This draft decision overturning Roe v. Wade would send us back to a Draconian-era society in which Americans are not allowed to make decisions best for themselves, their health, and their families."

Bay Area candidates weigh in
LGBTQ candidates in the liberal Bay Area have also taken advantage of the intense focus on abortion rights that the news about the leaked draft ruling brought about last week to remind voters of their bona fides when it comes to the issue of a woman's right to choose.

Bisexual Assemblymember Alex Lee (D-San Jose), who is facing several challengers in the June 7 primary race for the 24th Assembly District that straddles Alameda and Santa Clara counties, ballyhooed his endorsements from NARAL Pro-Choice, Planned Parenthood, and #VOTEPROCHOICE in a May 3 email his campaign sent out.

"Here in California, we won't be standing idly by. We're proposing an amendment to enshrine the right to choose in our state constitution so that there's no doubt about the right to an abortion in this state," wrote Lee. "But, like any constitutional amendment, it will need voter approval. We need to turn out and fight at the ballot box. We know we can't trust the Supreme Court to protect reproductive rights, so we will need to take action ourselves."

Butch lesbian Oakland At-Large City Councilmember Rebecca Kaplan, who is gender-nonconforming and running on the June primary ballot to be the first LGBTQ person to serve on the Alameda County Board of Supervisors, has jumped on the federal court case ruling to talk about not only abortion rights but also how it could be used to roll back LGBTQ rights. The candidate for the open District 3 supervisor seat on the East Bay county board released a video last week where they address the matter.

"Let's be clear, this is not just an attack on abortion rights. It is an attack on the LGBT+ community, people with disabilities, the right to contraception, and to racial equity in health care," stated Kaplan, who seeks to represent part of Oakland, Alameda, and San Leandro on the board. "The right-wing white supremacist actions to reverse decades of progress will impact our right to marry the person we love, Brown v. Board of Education, voting rights, and the Affordable Care Act. All of these are under attack, and we must act up and fight back!"

The two out candidates running for the East Bay's open 20th Assembly District seat also weighed in on the matter with their supporters last week. Lisa Schottenfeld, the field director for gay registered nurse and union leader Jennifer Esteen, vying to be the state's first Black female LGBTQ legislator, noted how she was knocking on voters' doors when she first heard the news about the pending decision and sat down on a curb as she held back her tears.

Schottenfeld wrote in her May 3 email that she briefly considered quitting Esteen's campaign to focus solely on reproductive rights organizing. But she just as quickly determined helping elect Esteen to the Legislature was where she needed to focus her energy for now.

Also last Tuesday gay Dublin City Councilmember Shawn Kumagai came out in support of the call by Governor Gavin Newsom, lesbian Senate President pro Tem Toni Atkins (D-San Diego), and Assembly Speaker Anthony Rendon (D-Los Angeles) to enshrine in the California State Constitution the right to abortion access. He and Esteen are both running to succeed Assemblymember Bill Quirk (D-Hayward), who opted not to seek reelection this year and has endorsed labor leader Liz Ortega, who is straight, in the race.

"By amending the state Constitution, we can enshrine pro-choice protections for all Californians, regardless of what the conservative majority on the U.S. Supreme Court rules," wrote Kumagai, who would be the first out legislator of Japanese descent to serve in the Statehouse. "In the Assembly, I will not rest in my fight to protect reproductive health rights and ensure access to safe and legal abortions for all women in California."

Gay UC Santa Cruz student Joe Thompson, who is aiming to be California's first nonbinary state legislator, also used the ruling to highlight their commitment to reproductive rights. It was already one of the issues specifically listed on the campaign website for their bid to represent the 28th Assembly District seat that straddles Santa Cruz and Santa Clara counties.

"I believe that reproductive freedom is a fundamental right. As someone who receives care from my local Planned Parenthood, I recognize the importance of ALL reproductive healthcare, and I know that abortions are an essential component of healthcare for women and for all those who can become pregnant," wrote Thompson. "Like all medical matters, decisions regarding abortion should be made by the individual whose body it is and their health providers — without any undue interference by our government. PERIOD."