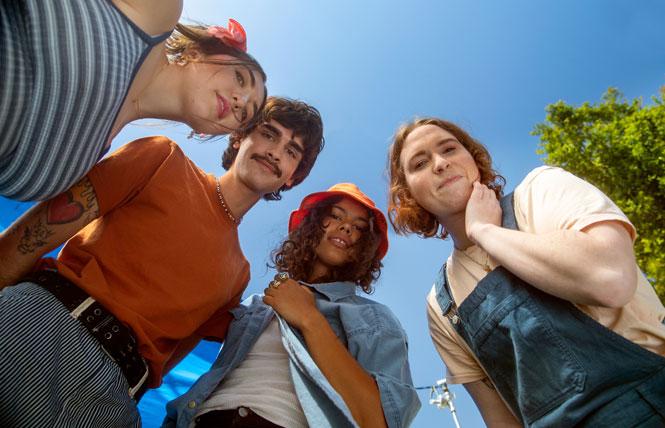 A survey just released by The Trevor Project, a national organization focused on suicide prevention efforts among LGBTQ youth, revealed that little has changed since its previous study in 2021. Trans and queer youth are struggling with mental health issues and, in many cases, not finding the health services or support they need.

Released May 4, the 2022 survey is the fourth documenting "the experiences of nearly 34,000 LGBTQ youth ages 13-24 across the United States," according to the nonprofit. Forty-five percent of respondents were youth of color and 48% described themselves as transgender or nonbinary.

The Bay Area Reporter was given the results of the survey, conducted between September 20 and December 31, ahead of their official release. Among the key takeaways were that 45% of LGBTQ youth seriously considered attempting suicide in the past year. Fewer than one in three transgender and nonbinary youth found their home to be gender-affirming.

Sixty percent of LGBTQ youth who wanted mental health care in the past year were not able to get it. LGBTQ youth who live in a community that is accepting of LGBTQ people reported significantly lower rates of attempting suicide than those who do not.

"These data provide critical insights into some of the unique suicide risk factors faced by LGBTQ youth, top barriers to mental health care, and the negative impacts of COVID-19 and relentless anti-transgender legislation," Amit Paley, CEO and executive director of The Trevor Project, stated in the report's introduction.

According to the 2021 survey conducted by The Trevor Project, which is based in West Hollywood, California, 42% of LGBTQ youth had seriously considered suicide.

Nationwide, among youth in general, those figures are notably lower. According to the federal Centers for Disease Control and Prevention, "18.8% of students nationwide reported seriously considered attempting suicide" in 2019.

Collecting this data is important, advocates said. Local organizations LYRIC — formerly Lavender Youth Recreation Information Center — utilize these types of surveys as it tries to figure out where resources should be allocated, said Adam-Michael Royston, development and communications director for the 34-year-old organization located in San Francisco's LGBTQ Castro neighborhood.

Since the beginning of the COVID-19 pandemic, "the demand for mental health services have more than tripled," said Royston in a phone interview.

The demand for those services means that LYRIC routinely has about 10 to 15 youth on a waiting list, he said, although the reopening of public schools in San Francisco last summer following the worst of the pandemic has alleviated the problem somewhat. The wait time overall is "generally short," Royston said.

Still, money only goes so far and organizations like LYRIC have to utilize what they have to best effect.

"I think it shows that we have to have more resources for families of trans and nonbinary youth," said Royston, noting that LYRIC is in the beginning stages of conducting a needs assessment for LGBTQ youth in the nine-county Bay Area. "We want to go to youth and ask 'what is your greatest need?'"

Larkin Street Youth Services, which provides services for youth experiencing homelessness, including LGBTQ youth, also sees the data as a way to push for more resources for youth.

"At Larkin Street, we know that racism, homophobia, and transphobia are major drivers of homelessness, and the overrepresentation of LGBTQ+ youth and youth of color among those who are experiencing homelessness is well documented," Ilsa Lund, chief of strategy for Larkin Street, wrote in an email to the B.A.R.

"The Trevor Project survey shows what a significant difference it can make in a young person's life if they have access to LGBTQ-affirming support," she added. "As the rights of LGBTQ+ youth are under attack by state legislation across the country, we take very seriously our responsibility to provide that support, and we hope that data like these will lead to increased resources for young people whose lives may depend on it."

Accessing services
Another point highlighted by The Trevor Project survey is that among all LGBTQ youth, 82% wanted mental health care and 18% did not. Strikingly, 60% of all LGBTQ youth who wanted mental health care in the last year were not able to get it. That includes nearly three in five transgender and nonbinary youth (58%) and more than three in five cisgender youth (62%).

Some of the reasons cited for not being able to obtain mental health care included fear of discussing mental health concerns (48%); concerns with obtaining parental/caregiver permission to do so (45%); fear of not being taken seriously (43%); and lack of affordability (41%). At the bottom of the list was the lack of parental/caregiver permission (20%).

Perhaps unsurprisingly, the survey also found that when LGBTQ youth were able to find support at home or at school, they were far less inclined to consider suicide as an option. Only 37% of youth interviewed said they considered their homes to be LGBTQ-affirming. Somewhat more encouraging is that 55% said they considered their schools to be supportive. In the cases of transgender and nonbinary youth, those figures were 32% and 51%, respectively.

There is an issue with the survey itself. Paley wrote in the introduction to the survey that the lack of real sexual orientation and gender identity statistics hampers efforts to pull together hard statistics.

"It's essential to emphasize that we still do not have known counts or registries of the LGBTQ youth population," stated Paley, "and comprehensive, intersectional data on LGBTQ youth mental health outcomes remain limited."

Nationally, there are really no reliable databases of LGBTQ statistics. Even here in California, efforts to collect such information are limited.

That said, the survey offers a detailed look at the mental health of LGBTQ youth, particularly at a time when right-wing leaders seem more than happy to use them as punching bags to drum up money and votes among their voter base.

The report can be viewed here.