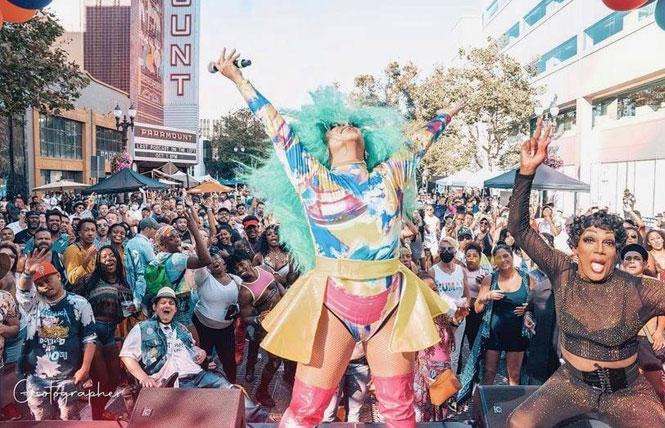 As the Bay Area Reporter previously reported, several LGBTQ leaders in the East Bay announced in February they would hold a festival in light of Oakland Pride's implosion last year. A parade, however, is not planned for this year.

Sean Sullivan, Pridefest board member and co-owner of the LGBTQ Port bar in Oakland, said that organizers have been lining up sponsors and finalizing other details.

With a goal of keeping queer Oaklanders in the heart of the city, Pridefest will take place at 20th Street/Thomas L. Berkley Way from Broadway to Harrison Street and encompass parts of Snow Park and 19th Street, a news release stated. It is a different location than that of previous Oakland Pride festivals but mostly in the same general area. There will be three stages, each with diverse programming to reflect the entire queer community as opposed to gender- and ethnic-specific stages, according to the release.

"Our goal is inclusion and we feel our committee, made up mostly of queer people of color, will help us achieve that for this year," stated board member Christie James, who identifies as pansexual and bisexual and is the morning time DJ at 103.7 FM and past stage producer of last year's Pridefest that took place on two blocks of Broadway near the Port bar.

In addition to Sullivan and James, other Pridefest board members are: Michael Barajas from Gilead Sciences; Valentino Carrillo from Que Rico; Richard Fuentes, who is Sullivan's partner, from BART; Nenna Joiner, owner of Feelmore Adult; Joe Hawkins, executive director of the Oakland LGBTQ Community Center; Janelle Luster of TransVision; and Val Klein of iHeartMedia.

Some of the organizers have worked with Oakland Pride in the past. Hawkins is a co-founder and past board member, while James managed the women's stage from 2017-2020, the release stated.

Sullivan told the B.A.R. in a Facebook message that festival admission is expected to be donation-based at the entry gates.
"That will be settled during the summer," he wrote.

Oakland Pride charged $10 for adults and $5 for kids 12 and under for the festival.

James pointed out that the Get Involved button allows artists to sign up to be a performer.

"In addition to bringing in some notable names for the LGBTQ community, we know we have incredibly talented QPOC right here in Oakland and the greater Bay Area," James stated. "Sign up. Represent. Show us what you've got."

Leather district celebrates anniversary
The San Francisco Leather & LGBTQ Cultural District will mark its fourth birthday with what it's calling an "Audacious Anniversary" party Saturday, May 7, from 5 to 9 p.m. at the Folsom Street Foundry, 1425 Folsom Street.

A news release noted that the celebration will feature performances by the House of MORE!, The Rebel Kings, ambient suspension bondage by Shay Tiziano and Ivy Limieux, DJ Fawks, and demos by ONYX Northwest, The Exiles, The 15 Association, and Society of Janus.

"We want to celebrate our anniversary by throwing a party for our community, after spending so much time separated in the last two years," stated Cal Callahan, district manager.

There will be an inaugural Brazen Runway Strut your Smut. Fashionistas of leather, fetish gear, and drag are invited to participate in a fun audience-choice fundraiser for the district.
Treats will be provided by MamaBear's Kitchen.

The Leather & LGBTQ Cultural District, created by the San Francisco Board of Supervisors in 2018, is 22 city blocks in the western South of Market neighborhood that have been home to numerous leather and kink venues since the 1960s, as Bob Goldfarb, a former board president and now executive director of the district, wrote in a Guest Opinion piece in the B.A.R. last year.

The release noted that applicable COVID precautions will be enforced. Attendees should bring proof of vaccination.

Admission is free. This is a 21 and over event.

For more information, check out the Bloom Community app or the Facebook event page "Audacious Anniversary."

Cervantes was the lead artist and director for the Hope for a World Cure project; the mural was painted in 1998 and commemorates the Castro district's struggle with the AIDS pandemic in vivid colors and rich detail.

On the fundraiser's webpage, organizers aim to raise $55,000 to fully restore the mural, which has been damaged by vandals as well as faded over time. In January, Broke Ass Stuart reported that the mural had been badly defaced. Restoration will include a strong conservation quality varnish to protect the mural from UV light and pollutants and a graffiti shield that should last decades, according to the description.

The mural was painted as a collaboration with the Precita Eyes Muralists Association and Art from the Heart Heals. It had previously been damaged in 2017 by a graffiti artist. 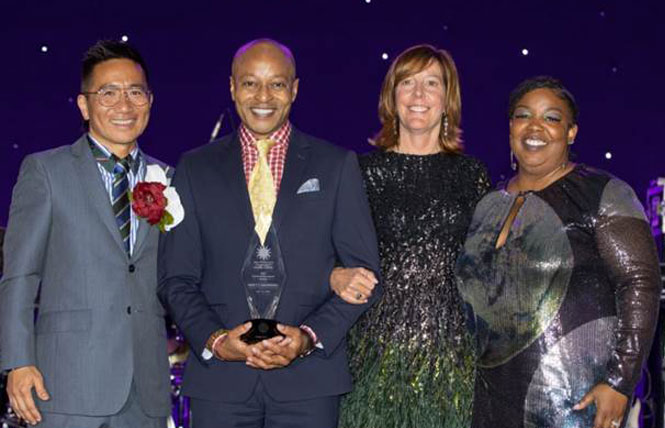 PRC's Andrews honored by nonprofit group
Brett Andrews, CEO of PRC, a San Francisco nonprofit that provides residential and other services for people affected by HIV/AIDS, substance use, or mental health issues, was recently honored with the Community Impact/Leadership Award from San Francisco Community Health Center for his longtime leadership in health justice. He was recognized at the April 16 California Community Health Center gala, according to a news release.

PRC, which started in 1987, assists approximately 5,700 individuals annually, a news release stated. It merged with Baker Places, a residential treatment agency, and the AIDS Emergency Fund in 2016, and also provides benefits counseling and workforce development programs.

Updated, 5/6/22: The PRC item was corrected to note that PRC CEO Brett Andrews was honored as an individual, not the organization as originally reported. We received inaccurate information from the PR agency.