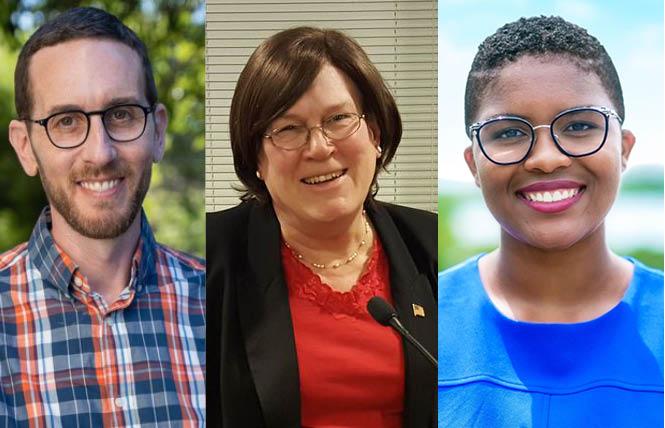 LGBTQ lawmakers from 19 states have or will introduce laws to protect trans kids from civil and criminal penalties when seeking gender-affirming care.

At a virtual press conference May 3 with representatives from several states, gay California Senator Scott Wiener (D-San Francisco) announced a coalition of LGBTQ legislators, health providers, and civil rights groups from throughout the United States was working to introduce legislation in the various statehouses that would provide refuge and support for trans kids and their families.

New Hampshire State Representative Gerri Cannon (D), a trans woman, called for lawmakers across the country to support trans kids no matter where they reside.

"We should be giving children a chance at a normal life in a society that does not support people who are different," she said during the virtual meeting.

The momentum is building from Wiener's March 17 announcement of his planned legislation that would provide protection to trans kids and their families if they come to California from states "criminalizing the parents of trans kids for allowing them to receive gender-affirming care." Written a short time later, his proposal is now encapsulated in Senate Bill 107, as the Bay Area Reporter previously reported.

Last month, Wiener shared the bill language via Twitter in hopes of seeing other state legislatures also adopt it. SB 107 would make it California policy to reject any out-of-state court judgments removing trans kids from their parents' custody for allowing them to receive gender-affirming health care.

It also would bar compliance in California with any out-of-state subpoena seeking health or other related information about people who come to California to receive gender-affirming care for the purpose of criminalizing such individuals or removing their children from their homes. And it would make clear that any out-of-state criminal arrest warrant for someone based on violating another state's law against receiving gender-affirming care is the lowest priority for law enforcement in California.

That was a direct response to actions and legislation in Texas and other states such as Alabama, where trans kids and their parents have found themselves vilified by hostile state governments seeking to prosecute parents for providing health and other forms of gender-affirming care for their children. Several additional states have joined the fray, introducing — and passing, in some cases — similar, harmful legislation.

On February 22, Governor Greg Abbott (R) sent a letter to the commissioner of the Texas Department of Family and Protective Services, calling on the agency to "conduct a prompt and thorough investigation of any reported instances of these abusive procedures in the state of Texas." The letter followed an opinion issued the previous week by Texas Attorney General Ken Paxton (R), in which he equated treatment for trans kids with child abuse.

In addition to Wiener's bill, legislation has been submitted in New York by gay Democratic state legislators Brad Hoylman and Harry Bronson, and in Minnesota by gay Senator Scott Dibble (D). Twenty-one LGBTQ lawmakers representing 16 additional states publicly committed to introduce trans-refuge state bills in Colorado, Connecticut, Florida, Georgia, Illinois, Kansas, Kentucky, Maine, Michigan, New Hampshire, New Mexico, Oregon, Rhode Island, Vermont, Washington, and West Virginia, according to a news release from Wiener's office. In the case of many states, however, legislatures are either in their last days of session or finished until later in the year or 2023. Legislation can't be introduced until then.

The bills, if passed, aim to make it harder for those states attempting to prosecute their own citizens who flee to other states for gender-affirming care for trans kids.

"These bills establish new protections," said Wiener. "We're not going to allow other states to reach into other states with their laws to attack trans people."

For lesbian former Houston mayor Annise Parker, now president and CEO of the LGBTQ Victory Institute, it's time to fight.

"The breaking point was when legislators in my home state of Texas started taking the position that kids should be stripped away from their families," Parker said. "Families are terrified. This is an assault on the heart of our community.

"We see you, we hear you, and we're going to do everything in our power to make sure you're safe," she added.

"Parents should not live in fear of being hunted down by the government for loving and supporting their child," stated EQCA Executive Director Tony Hoang. A native of Texas, Hoang stated that he's "ashamed" of actions being taken by Abbott in the Lone Star State.

Jodi Hicks, president and CEO of Planned Parenthood Affiliates of California, stated that the organization stands with the LGBTQ community.

"Planned Parenthood health centers across California will always be open for all who seek or need care," Hicks stated.

In light of the May 2 leaking of a draft ruling by the U.S. Supreme Court's in an abortion case, indicating not only that the court is poised to overturn its two long-standing decisions protecting the right to abortion but that it is also laying the groundwork to overturn landmark pro-LGBTQ decisions, queer Rhode Island state Senator Tiara Mack (D) lamented the latest barrage of attacks on LGBTQ rights.

"These are unprecedented times, and it feels like we are always on the defensive," Mack observed during Tuesday's virtual press conference.