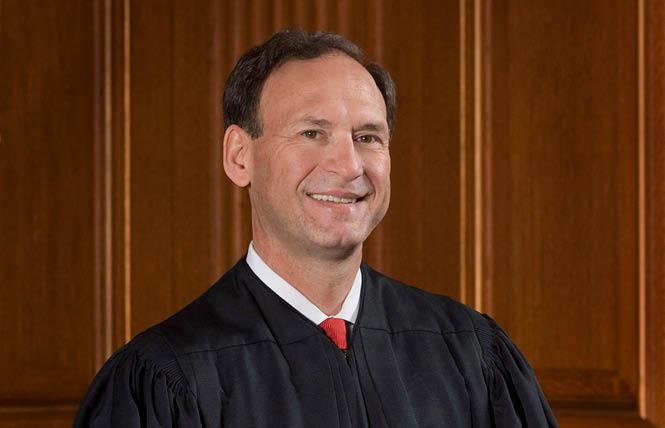 In an unprecedented development, a leaked draft of the U.S. Supreme Court's upcoming ruling on abortion indicates not only that the court is poised to overturn its two long-standing decisions protecting the right to abortion but that it is also laying the groundwork to overturn landmark pro-LGBTQ decisions.

Politico first reported on the leaked document May 2.

On May 3, Chief Justice John Roberts called the dissemination of the draft decision "a betrayal" and said an inquiry would be launched into the source of the leak. He also stated the document is authentic.

"Although the document described in yesterday's reports is authentic, it does not represent a decision by the court or the final position of any member on the issues in the case," Roberts stated.

The draft was authored by Justice Samuel Alito, part of the conservative majority on the court.

LGBTQ legal experts and others were shocked at the unprecedented breach of Supreme Court tradition of a draft decision being made public ahead of the formal ruling, expected in June or July. They were also alarmed at the decision and its potential impacts in other areas of the law.

"LGBTQ people should recognize that we are once again in the crosshairs and that all of our hard-won protections are under serious threat," said Shannon Minter, legal director for the National Center for Lesbian Rights.

Others said the country was headed in an uncharted direction.

"If this really is the judgment of a majority of the Supreme Court," said Jennifer Pizer, law and policy director for Lambda Legal Defense and Education Fund, "we have entered an era of arrogant judicial activism unlike anything this country has seen for a hundred years."

Nan Hunter, a veteran of many legal battles for LGBTQ equality, said the draft would almost certainly unleash "a rush by right wingers to get a challenge before the court" to overturn Obergefell v. Hodges, the 2015 decision which struck down state bans on marriage for same-sex couples.

The draft abortion decision is dated in February, leaving open the possibility that it is not finalized. At least five justices must sign onto the final decision to carry the majority. Votes on some decisions in the past have changed very late in the process. Justices have sometimes voted with a majority view at first, then later changed their vote after reading the majority's proposed decision. Also in the past, attempts to report the outcome of cases before the decisions were released have turned out to be wrong.

But most legal analysts Monday night said they believe the draft released is authentic and that its being leaked represents a dramatic departure from the court's efforts to avoid being influenced by political pressure.

"We hold that Roe and Casey must be overruled," states the draft decision in Dobbs v. Jackson, referring to Roe v. Wade and Planned Parenthood v. Casey.

Roe, in 1973, said there is an implied right to privacy and liberty guaranteed by the Constitution that covers the right to choose an abortion. Casey, in 1992, said that states could regulate abortion once a fetus becomes viable as long as the regulations did not create an undue burden to women who seek an abortion.

In language especially troubling to LGBTQ legal experts, the draft opinion in Dobbs, penned by Alito, states, "The Constitution makes no reference to abortion, and no such right is implicitly protected by any constitutional provision," including the due process clause of the 14th Amendment. According to Alito, the only implicit rights the 14th Amendment due process clause protects must be "deeply rooted in this nation's history and tradition" and "implicit in the concept of ordered liberty."

Alito's draft says abortion is not one of those rights and, in language reminiscent of Bowers v. Hardwick, the 1986 decision that allowed states to ban same-sex sexual relations, he notes that three-fourths of states made abortion a crime when the 14th Amendment was adopted. The opinion further echoes the Bowers decision when it notes that a right to abortion was "entirely unknown in American law" before the latter part of the 20th century.

Pizer said the breadth of the draft decision is troubling.

"If our due process rights to 'ordered liberty' are to be limited now to those rights respected by white male landowners wearing wigs and tri-cornered hats, the Constitution will fail utterly to do the job our founders intended it to do," said Pizer. "And while it's true that abortion is unique in some ways, its use as a political weapon to drive extreme-right voters is anything but, as state legislatures have proved again and again in recent times with frenzies of anti-LGBTQ bills."

Alito's draft also says that abortion is "critically different" and "fundamentally different" from some other rights that have been protected by the 14th Amendment — such as intimate sexual relations, contraception, and marriage — because abortion takes the life of an "unborn human being."

But activists were not much comforted by that distinction.

Evan Wolfson, a gay legal advocate who was a key player in the judicial and political battle for marriage equality, wrote in an email that Alito "leans on the distinctiveness of abortion and doesn't necessarily go further (though we know he would like to)."

Hunter was more blunt: "Justice Alito badly wants to overrule Obergefell. What this opinion tells us is that he doesn't have the votes to do so. If there were three other justices — beside him and [Clarence] Thomas — willing to end same-sex marriage, that would have been part of this decision."

Controversy
The leaking of the draft decision has stirred almost as much controversy as the document itself. The Supreme Court has a long-standing protocol of not signaling to the public how its decisions are developing. The presumed motivation behind this tradition is to prevent outside politics from putting pressure on the court's legal analysis and reasoning. Some legal commentators Monday night were characterizing this leak as a blatant attempt to play politics with the final formulation of the court's abortion opinion. But the pressure could have come from either side — from Alito, attempting to discourage any justice from abandoning his politically aggressive opinion, or from a pro-choice justice hoping public pressure would rattle any majority justice who was concerned about the far-reaching consequences of the opinion.

"That someone leaked this opinion — violating the court's most sacrosanct rule of confidentiality — speaks volumes about how extreme and dangerous much of the court's jurisprudence has become," said NCLR's Minter. "We don't know if this will be the final decision, but it is shocking to read this assault on an established fundamental right."

Dobbs v. Jackson is a case where an abortion clinic challenged a new law in Mississippi that banned abortion at any time after 15 weeks, unless there is a medical emergency or severe fetal abnormality. Most observers following the case and the court's oral argument have predicted the Supreme Court majority would likely overturn Roe and Casey. But nearly everyone expected the decision to be released in late June, when the court typically releases its most controversial decisions.

"A court that would issue an opinion like this — if it does — is a court that has abandoned any pretense of protecting individual freedom," said Minter. "... We have become too accustomed to counting on the courts for protection, and we must realize the days when we could safely do so are past. Our hope lies in joining forces with others who are fighting to protect democracy and the rule of law and to prevent our country from sliding into the same authoritarianism that is rising across the globe."

Wolfson said the leaked document is reason to vote against Republicans in the upcoming midterm elections.

"Whether or not this draft makes it into a majority opinion, and whether or not it later gets invoked in assaults on other rights, it's already a fire bell in the night," Wolfson stated. And he said it underscores "the importance of voting out the Republicans who have conspired, lied, and court-packed to get our country to this ugly, divisive, corrosive moment."

"The cure," stated Wolfson, "is to vote in representatives who will defend Americans' rights and our constitutional democracy itself."

"California will not stand idly by as women across America are stripped of their rights and the progress so many have fought for gets erased," the three said in a statement. "We will fight. California is proposing an amendment to enshrine the right to choose in our state constitution so that there is no doubt as to the right to abortion in this state.

"We know we can't trust the Supreme Court to protect reproductive rights, so California will build a firewall around this right in our state constitution. Women will remain protected here," they pledged.

"California unequivocally stands for the right to an abortion, no matter what the right-wing zealots on the Supreme Court say," he stated. "We will fight hard to expand abortion access, here and in other states."

President Joe Biden, in a statement issued before the chief justice confirmed the authenticity of the draft decision, called on voters to elect more pro-choice officials in November.

"At the federal level, we will need more pro-choice senators and a pro-choice majority in the House to adopt legislation that codifies Roe, which I will work to pass and sign into law," Biden stated.