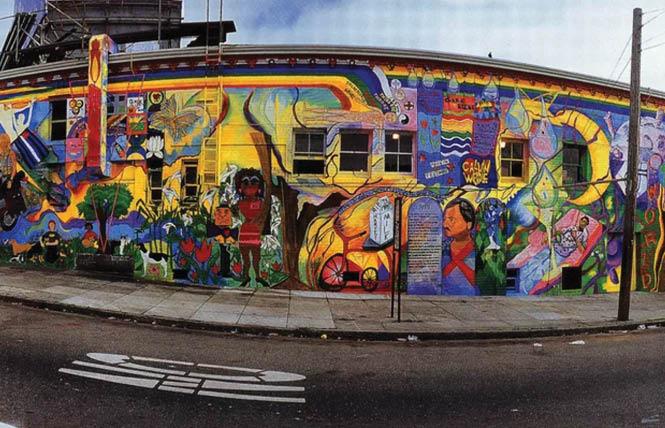 Cervantes was the lead artist and director for the Hope for a World Cure project; the mural was painted in 1998 and commemorates the Castro district's struggle with the AIDS pandemic in vivid colors and rich detail.

On the fundraiser's webpage, organizers aim to raise $55,000 to fully restore the mural, which has been damaged by vandals as well as faded over time. In January, Broke Ass Stuart reported that the mural had been badly defaced. Restoration will include a strong conservation quality varnish to protect the mural from UV light and pollutants and a graffiti shield that should last decades, according to the description.

The mural was painted as a collaboration with the Precita Eyes Muralists Association and Art from the Heart Heals. It had previously been damaged in 2017 by a graffiti artist.

"In the 24 years since the mural was painted as an Arts Commission-funded collaboration between Precita Eyes Muralists and Art From the Heart Heals, it has become an important historical and cultural asset to the community. Unfortunately, it has also been subjected to repeated vandalism and faded over time," Mandelman wrote in an April 29 Facebook post announcing the launch of the fundraising campaign.

It's one of four murals in the LGBTQ Castro district that addresses the AIDS epidemic, two of which were unveiled last month in the micro-neighborhood of Duboce Triangle. Artist Serge Gay Jr. created the "Never Alone" mural on the wall of Maitri Compassionate Care hospice at 401 Duboce Avenue at the intersection with Church Street.

As he had explained in an interview with the Bay Area Reporter as he was designing the public artwork, Gay included "a lot of symbols of people who have died from AIDS and HIV and what has happened, and is still happening." For example, people in red symbolize those lost to AIDS, while a lotus flower symbolizes life and rebirth.

The most notable figures in cannabis legalization were the late Mary Jane Rathbun, aka Brownie Mary, and the late Dennis Peron, a gay man. At first, they gave cannabis in all forms, from flowers and edibles to brownies and tea. Then, they went on to write and promote California's Proposition 215, the Compassionate Care Act, which changed the nation's perspective on cannabis as medicine.

The fourth mural is called "Laughing Gorilla" and can be found on the side of the building at 19th Street at Castro. It was inspired both by the AIDS epidemic and the 1989 Loma Prieta earthquake. Created by David Seibold, a gay man, during the height of the AIDS crisis, it was restored in 2019.