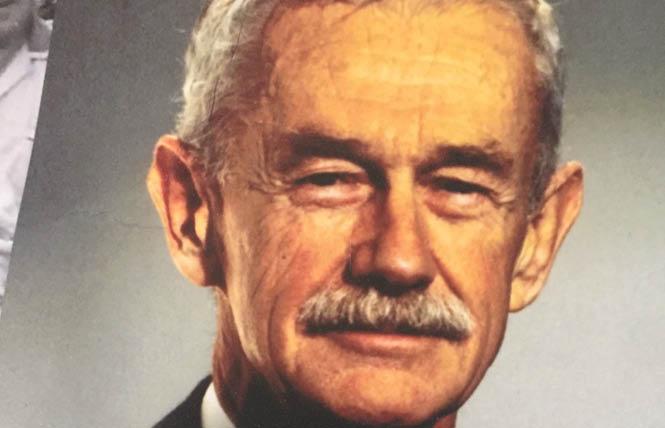 The Reverend Canon David R. Forbes, a leatherman, outdoorsman, and Episcopal priest loved as much for his compassion as his intellect, died at his home in Palm Springs, April 26, three days short of his 97th birthday.

Born April 29, 1926, in Palo Alto, Reverend Forbes would "live a life of extraordinary service to the Episcopal Church, Episcopal schools, and their communities," stated an obituary issued April 28 by Grace Cathedral, where he served on and off in numerous capacities for several decades.

"Remembered as the first Canon Precentor of the modern era, David was instrumental in the transformation of our liturgy, and the completion and consecration of Grace Cathedral in 1964," according to the obituary. "He served as our vice dean from 1966 to 1972. David was the founding headmaster of the Cathedral School for Boys, a lifetime trustee of the school, as well as the founding headmaster of St. Paul's Episcopal School, Oakland. We remember fondly his wisdom and generous presence, and willing participation in tasks great and small."

Reverend Forbes, who had been married and had children with his wife, came out later in life. But it was in coming out, and finding like-minded men who shared his interest in spirituality and leather, where he was able to practice a spirituality that brought those two aspects of his life together in a deeply meaningful way.

In the late 1990s, Reverend Forbes joined the Defenders Leather Levi Club, an affiliate of the Catholic affinity group, Integrity, geared toward men who wanted to bring their sexual and spiritual lives together. Although a Protestant, he eventually became chaplain of the San Francisco chapter.

It was there he met many of the men with whom he would go on to forge deep friendships, such as Guerneville resident Mario Torrigino.

"David was a very centering energy for me," said Torrigino in a phone interview. "Those days I was out slaying dragons every day. That's what I did as an attorney. I was a heavy, and I was doing a lot more heavy litigation. That's why I found it beneficial when David would lead the discussion at our meeting. It would take me out of my head and bring me back to the room. That had been a common thread throughout our relationship for 25 years.

"He knew what I did for a living and he could help me get out of the mindset," Torrigino continued. "The remnant of an argument that your mind rehashes in your head afterward can interfere with your being present. I always trusted David to respect me and take me into the present. That's a funny thing but that's true spirituality."

A man of compassion
Others remembered him for his compassion. Former San Francisco resident Peter Fiske of Palm Springs, a founder of The 15 Association, Mr. SF Leather Daddy XXI, and a former president of the San Francisco AIDS Emergency Fund, remembered Reverend Forbes for his outreach to Fiske's late partner, Coulter Thomas, Mr. International Leather in 1992, in addition to work he did for the LGBTQ community. Fiske and Reverend Forbes knew one another for 50 years, Fiske said.

"In 1992 when Coulter was dying, he was very depressed," Fiske wrote in an email. "Coulter said, 'Why is God punishing me? I have led a good life and tried to always be loving and kind and now I am sick and in pain and dying. I hate God.'

"I sent him to David Forbes, who saw him immediately at Grace Cathedral, in his office," added Fiske. "Coulter told him he hated God and David said, 'I can work with that. If you had said you didn't believe in God I would have a hard time helping you.' At first he saw Coulter daily, then semi-weekly and then weekly until he passed away three months later, at peace with God and his own death."

Reverend Forbes was responsible for starting an Episcopal shelter for homeless people living with HIV/AIDS at the former Club Baths in San Francisco's South of Market neighborhood, Fiske continued, and in 1986 he "quietly began a group to collect donated AZT from those who passed and get it to those people who needed it to stay alive."

At one point, he brought a six-month supply to Fiske's partner. Reverend Forbes' "unselfish and loving kindness were legendary in San Francisco," wrote Fiske.

"He very much was a nature person," said Fuentes. "He loved hiking, he was hiking in the Sierra up until a year ago."

Reverend Forbes' own love of nature was deeply rooted in his Christian faith, said Warton. Nature was a part of his concept of God.

Others in the church, which was always central to Reverend Forbes' life, remembered him with tremendous admiration. Burns Jones, head of the Cathedral School for Boys which Reverend Forbes founded in 1957, remembered him as "patient and passionate, witty and wise, historian and humanitarian, admirer and admired."

In a letter to the students and staff of the Cathedral School announcing Reverend Forbes' passing, Jones wrote, "One of the things that have dawned on me during my tenure at Cathedral School is just how conscious and prescient David was, both in founding Cathedral School for Boys and in championing the cause of Episcopal schools throughout the subsequent decades.

"David's vision was divinely inspired and directed by an almost preternatural understanding of the rhythms and needs of boys," Jones wrote. "While the quality of Cathedral School's academics was always prominent, of equal significance was the diversification of the student body. Unlike many independent schools at that time, Cathedral was a school that would seek to provide a full education to any boy, regardless of his background and regardless of his circumstances. Long before most, David understood that all students and the communities in which they lived would benefit from this educational vision."

Jones, speaking with the B.A.R. in a phone interview, remembered Reverend Forbes as a man with a deep interest in those around him, who remembered details about people, even the students who had passed through the Cathedral School years before.

"Even well into his 90s, David remained a force," Jones said. "And by that, I mean, he continued to show up to board meetings, and be actively involved in important conversations about the school. His level of energy and intellect into his 90s was just phenomenal."

Jones had known Reverend Forbes for only seven years but was deeply touched by his friendship with the man and all that he had accomplished.

Reverend Forbes was preceded in death by his partner of 19 years, Toby Wiggin, who died in 2019. He is survived by his daughters Elizabeth Forbes Whitaker, Margaret Forbes MacDonald, and Mary Forbes Nicoll. A Requiem for Reverend Forbes will be celebrated at Grace Cathedral Wednesday, May 25, at 3 p.m.