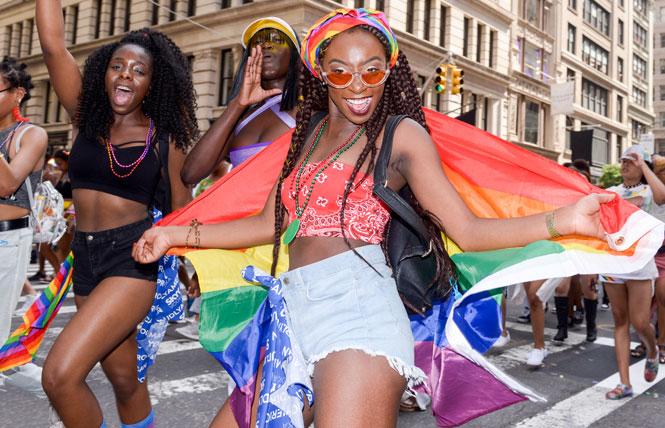 New York City felt like it was almost its bustling self again as I walked through the streets enjoying the warm spring weather during a recent trip.

The city, like many others, is forever changed after more than two years of the COVID pandemic, but in true New York fashion, the Big Apple is coming back. It was my second trip within six months after about a two and a half year break.

New Yorkers rolled up their sleeves (more than 80% are vaccinated), masked up, and have done pretty much everything they can to get their groove back. However, COVID subvariants continue to emerge in the ongoing pandemic. Some venues are still enforcing proof of vaccination and masks. Face coverings are still required on all public transportation until further notice and in Broadway theaters at least until May 31.

Recently, COVID cases have been on the rise in New York due to the new highly contagious Omicron subvariant, BA.2.12.1. People planning to visit should check Visit New York (under Basic Information) for the latest.

Some Broadway shows have canceled performances due to COVID. Other shows are taking place. New restaurants are opening, and reservations are harder to get than ever before. New museum exhibits are opening. Big events are coming back like New York Pride, which returns in-person June 26 with the theme "Unapologetically Us."

"Our community has been through tremendous hardships over the past few years, beginning with the pandemic, and continuing with a reckoning with social justice, threats to our democracy, and more recently armed conflict overseas," stated NYC Pride's new executive director, Sandra Perez, in a March 25 news release. "Compounding these struggles is the onslaught of legislation around the country that directly targets LGBTQIA+ individuals.

"In spite of these challenges and attacks, we are here to tell the country and the world: we will not be erased," Perez continued, stating that the community will stand together to face the attacks on the LGBTQ community across the country and around the world. "We will continue to love and live our truth and be our full and complete selves — and we are not going to apologize for it."

NYC Pride board Co-Chair Sue Doster noted the importance of the annual celebration that attracts upward of two million people from across the United States and all over the world.

"We're thrilled to be able to finally invite everyone back," she stated.

"The city is as vibrant as ever," said Chris Heywood in a phone interview. Heywood, a gay man, is executive vice president of global communication of NYC & Company, New York City's destination marketing and convention and visitors bureau.

"That's the beauty about New York," Heywood continued. "Resilience is really our middle name. People are going to encounter a city that is continuing to come back." 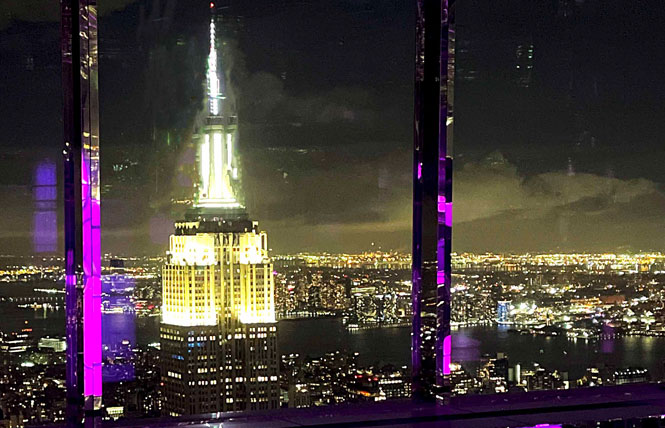 A new view of New York City from The Summit at One Vanderbilt. Photo: Heather Cassell

New attractions
Some of the new things to see in New York are Summit One Vanderbilt, the Moynihan Train Hall, and Little Island, the latest park near the Chelsea Piers.

The city's newest vantage point is at Summit One Vanderbilt. The Summit is a 65,000 square foot space at the top of the 93-story office and residential building at One Vanderbilt adjacent to Grand Central Station.

The observatory deck opened in October 2021. It is much more than the highest view (for the moment) of New York City; it's an experience with a view. Each room is an art installation accentuating the feeling of being high in the sky or in the clouds. At the very top are Apres and the Summit Terrace, where my girlfriend and I enjoyed a cocktail while admiring New York's sparkling skyline under the night sky.

Tickets to catch the sunset view cost about an extra $16. The Summit does not itemize what the extra amount is at checkout, but it's for experiencing the Summit at the golden hour, the optimal time of day.

It wouldn't be New York City without the many opportunities to see art. This spring and summer visitors can catch the 80th edition of the Whitney Museum of American Art's "Biennial 2022: Quiet As It's Kept," which opened April 6. The two-floor exhibit brings together a survey of 63 American artists exploring the darkness and disruption of 2020. The title is a colloquial phrase taken from the late novelist Toni Morrison. The show runs through September 5.

Henri Mattise lovers can take in a rare exhibit of the French artist's early works that formed modern art at the Museum of Modern Art exhibition "Mattise: The Red Studio," which opened May 1. The show runs through September 10.

Brooklyn Academy of Music is featuring the DanceAfrica Festival, which is celebrating its 45th anniversary through the end of this month.

Dining and drinking
Food draws my girlfriend and I to New York just as much as Broadway's musicals. For this trip, I sought out restaurants that were old favorites that survived the pandemic, some that were reborn, and others that were new.

During the day we lunched at the fun, cheeky and very gay diner Cafeteria: a Chelsea neighborhood staple, Elmo; and famed chef and restaurateur David Chang's Momofuku Noodle Bar.

At night we hit the town enjoying dishes crafted by some of New York's finest lesbian chefs. Chef and restaurateur duo Rita Sodi and Jody Williams' beloved Via Carota lived up to the hype. You can't go wrong with pasta, but this is exceptional pasta. I also dined at the culinary couple's newest venture The Commerce Inn. It veers away from the chefs' usual turf, French and Italian cuisine, exploring and modernizing American Shaker dishes that hit the mark.

Two unique restaurants that might signal a shift in the queer culinary scene in New York are Tagmo and Hags. Both restaurants are queer-owned and -operated. They actively hire LGBTQ staff and are deeply involved in the community. 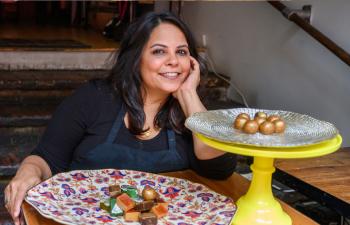 Queer chef and restaurateur Surbhi Sahni brings the world of India to New York at Tagmo restaurant in the Seaport neighborhood. Photo: Courtesy of Tagmo/Brittainy Newman

Queer chef Surbhi Sahni is the heart behind Tagmo, an Indian restaurant that opened in Seaport, a small shopping and dining center near One World Trade Center, in September 2021. Tagmo is not your average Indian restaurant. Dining there is a gastronomic adventure through India with all its diverse cuisines. 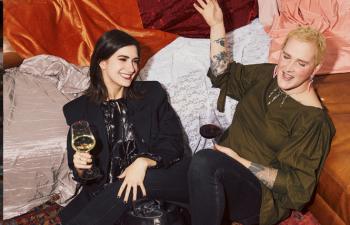 The much-anticipated Hags is targeted to open just ahead of Memorial Day weekend, May 25. The Lower Eastside restaurant aims to be the first upscale queer restaurant, according to business and life partners Telly Justice, a transgender woman, and Camille Lindsley, a queer woman.

New York's nightlife isn't quite what it used to be like yet. My girlfriend and I enjoyed early nightcaps at Tiny's & The Bar Upstairs in Tribeca, the historic Stonewall Inn in Greenwich Village, and Bar Veloce in Chelsea.

Village lesbian bar mainstays — Henrietta Hudson and Cubbyhole — and Brooklyn's Ginger's Bar got makeovers during the pandemic and recently reopened. Catch roving lesbian events hosted by Dyke Beer and Dave's Lesbian Bar on their websites or follow them on social media.

The boys are back in action from Midtown to Harlem with bars and nightclubs for every stripe in the rainbow flag. Check out Midtown's swanky The Townhouse of New York. Head to the West Village's Playhouse or get nostalgic at New York's oldest gay bar Julius' and the historic Stonewall Inn. Head uptown to Harlem for the last remaining Black-owned gay bar Alibi Lounge.

Where to stay
My girlfriend and I stayed at the Smyth Tribeca. The newly renovated modern 100-room hotel opened in September 2021. The hotel is comfortable, chic, and perfectly located on the corner of Chambers Street and West Broadway above the Westside's 1 line. The subway line is a direct vein to Broadway, the Village, and many of New York's most popular destinations.

Getting around
New York's metro is going touchless with Omny, an app that allows riders to tag on and off the subway and buses with their smartphones and other smart devices. Riders can choose to use the Metro Card or the app to get around the city.