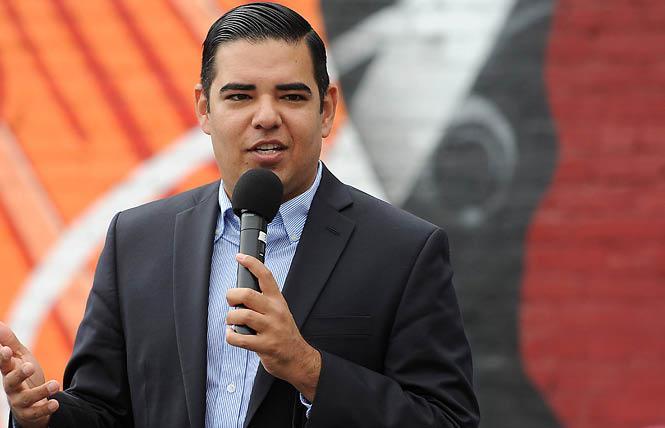 Among the non-incumbent LGBTQ Democratic candidates seeking U.S. House seats on the West Coast this year, gay Long Beach Mayor Robert Garcia has proved to be the most adept at raising money for his bid. He is leading the pack of three gay men and one lesbian seen as having the strongest chances of being elected to Congress in 2022 from the three-state region.

Between December 17 and March 31 Garcia raised $821,087, according to his most recent campaign contribution filings with the Federal Elections Commission. He also reported having $678,703 in his campaign coffers heading into the June 7 primary, where the top two vote-getters will advance to the November 8 ballot.

Garcia is seeking the open, new 42nd Congressional District along the coast of Los Angeles County. It is heavily Democratic, and Assemblymember Cristina Garcia (D-Bell Gardens) is seen as the other leading candidate among the eight people who qualified for the primary race. She reported raising $215,047 during the first three months of the year and had $177,732 remaining.

As he raises funds for his campaign, Robert Garcia has pledged not to accept any contributions from political action committees tied to corporate interests. According to his FEC reports, roughly half of the money Garcia raised from individual donors was in amounts less than $2,000.

"Our campaign is powered by grassroots supporters. We take no corporate PAC money, and are fighting to take dark money out of politics," he noted in an April 21 tweet hailing his endorsement from the group End Citizens United.

Our campaign is powered by grassroots supporters. We take no corporate PAC money, and are fighting to take dark money out of politics. Thank you @StopBigMoney and let's go win ???? https://t.co/wt1d0KTMjZ— Robert Garcia (@RobertGarcia) April 21, 2022

Not far behind Garcia in his dialing for dollars effort was gay former federal prosecutor Will Rollins of Canyon Lake, California. As of March 31, Rollins had netted $780,043 since October 1, with $9,800 coming from his personal finances. He also reported having $617,554 on hand to spend on his race.

He is aiming to oust from office conservative Congressmember Ken Calvert (R-Corona) in the race for the new 41st Congressional District that includes a large part of the Palm Springs area. Calvert reported having raised more than $1.5 million since the start of 2021; he was sitting on more than $1.3 million as of April 1.

Rollins has used his fundraising haul to pay for a television commercial that began airing last week. Recent polling in the race had him neck-and-neck with Calvert.

"While corporations and special interest groups continue to fill Ken Calvert's coffers, our support from individuals shows that people on both sides of the aisle are fed up with his self-dealing and extremist politics," stated Rollins. "Voters are looking for a representative who will stand up for the people of the Inland Empire and the Coachella Valley and represent all of us."

As the Bay Area Reporter noted in early April, gay progressive Democrat Derek Marshall has raised more than $502,000 since the start of 2021 for his bid to become the next House of Representatives member from the Golden State's 23rd Congressional District. But he has churned through much of the funds, reporting having $84,906 left as of April 1.

Marshall lives in San Bernardino County and is aiming to oust from office Congressmember Jay Obernolte (R-Hesperia) from his High Desert seat east of Los Angeles. Obernolte reported raising $526,305 since January 1, 2021 and had $247,424 to spend on his reelection bid.

Touting his raising more than half a million dollars, Marshall stated in early April that his "campaign is all about being on the ground, talking to folks, and finding out what they care about. People are donating to this campaign to elect someone who will work for them, not special interests."

The three gay non-incumbents seeking Southern California House seats could quadruple LGBTQ representation in the Golden State's congressional delegation if they all win their races. Gay Congressmember Mark Takano (D-Riverside), expected to easily win a sixth two-year term in November, is currently the lone LGBTQ congressmember from California as well as the West Coast.

Oregon race
In Oregon, lesbian former Santa Clara City Councilmember Jamie McLeod-Skinner is vying to survive her state's Democratic Party primary May 17 for the newly drawn 5th Congressional District. She is in a tough primary campaign against incumbent Congressmember Kurt Schrader (D-Canby), a moderate Democrat whom she has criticized as being too conservative. He reported raising $2,120,690 since January 1, 2021 and had $2,703,441 in his campaign account at the end of March.

McLeod-Skinner, who swung through the Bay Area several weeks ago to attend fundraisers for her campaign, reported raising $545,505 since October 1 and having $310,110 in her campaign account at the start of April. As of Friday she was more than halfway toward a goal of raising another $17,800 by Sunday.

"Without taking a dime of corporate money, Jamie has been putting in the work to gain support from everyday Oregonians - and the fact that in the last day or so alone, we've been able to raise just over half our April goal from individual donors speaks volumes to that," touted her campaign in a fundraising pitch emailed April 29.

If she wins she would be the first lesbian elected to Congress from the West Coast and the first LGBTQ congressmember from the Beaver State. Last week, the LGBTQ Victory Fund endorsed McLeod-Skinner and named her one of its "Game Changer" candidates this election cycle. It leaves Marshall as the lone person among the quartet who has yet to secure the national group's backing of his candidacy.

Trans CA candidates
Of the two transgender House candidates in California running against powerful Democratic incumbents this year, G "Maebe A. Girl" Pudlo is the only one to have filed a fundraising report to date. Pudlo, whose election in 2019 as the at-large representative for the Silver Lake Neighborhood Council in Los Angeles made them the first drag queen elected to a public office in the U.S., reported netting $19,181 as of April 1.

The progressive candidate, who identifies as trans nonbinary, is one of eight candidates running in the primary for the state's 30th Congressional District against Congressmember Adam Schiff (D-Los Angeles). Pudlo reported having $7,551 to spend ahead of the June election.

The other candidate, Bianca Von Krieg, is a transgender actress campaigning for San Francisco's newly numbered 11th Congressional District seat against House Speaker Nancy Pelosi (D-San Francisco). They are among the five people aiming to take on the powerful lawmaker in November and have yet to report any contributions for their campaign with the FEC.