B.A.R. exclusive: At SF elementary school, LGBTQ pride is on the march 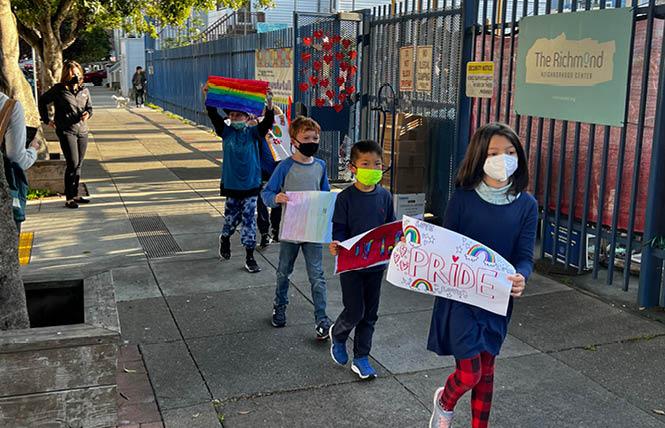 Decked out in rainbow accessories roughly two-dozen George Peabody Elementary School students came together on the blacktop courtyard of their San Francisco public school for a flash mob performance to "LOVE" by Gianluca Vacchi and Sebastián Yatra. The 2018 song, sung partly in English and Spanish, includes the refrain, "We all need a / A little bit of love."

Following the choreographed performance before the start of school Friday, the entire student body proceeded to march around the city block of its Inner Richmond neighborhood. Arranged by class, one first-grade teacher spelled out "l-o-v-e" with her students chanting back "spread love, spread love."

Greeting his pupils as they completed their loop back to the school was Principal Willem Vroegh wearing a rainbow sport coat and holding up a sign that read "Peabody Pride." He had decided to forgo the matching rainbow pants or else the entire ensemble would have been "too bright," he joked with a colleague.

"This is our first official Pride parade," Vroegh, a straight ally who has overseen the school for 17 years, told the Bay Area Reporter. "During Pride Month we have talked about it in the classroom for many, many years, for as long as I could remember, but have never had something this big before."

Members of the school's Rainbow Club, launched last school year, came up with the idea for the LGBTQ celebration. Since its schools are closed in June when Pride Month celebrations normally take place, the San Francisco Unified School District marks the annual observance in April, with its nearly 100 schools holding their own events throughout the month.

"I joined last year because I like learning about LGBTQ," said club member Ari Reifsteck, a 9-year-old third grader whose family is friends with their gay neighbors. The club helps teach people "it's good being who you are," she added.

Fifth-grader Mila Lofti, 10, told the B.A.R. that she signed up for the club this school year "because I thought it was important to learn about the LGBT community and hear other people's experiences being in the LGBTQ community."

One of the founding Rainbow Club members, fifth grader Eleanor Sewell, 11, uses she and they pronouns. The group is helping them "to be as open as possible" about their preferred pronouns at school, Sewell told the B.A.R.

"I want to learn more about the LGBT community and be in a place where everyone is welcome," said Sewell.

Fifth grader Zohara Luck, 11, also uses she and they pronouns. They told the B.A.R. they joined the club this school year "because LGBT rights are human rights" and that everyone "has the right to be who we are."

Vroegh told the B.A.R. the Rainbow Club has been particularly impactful for the students who are questioning their gender identity and what pronouns they want to be addressed by. More are asking not to be referred to as he or she, Vroegh noted.

"Coming out is not quite the word for it. They are still young and exploring who they are and want to take risks," he said. "I think it has made us feel it is way more important what we are doing."

Throughout the last academic year the eight original members of the Rainbow Club only met virtually after school because of the COVID pandemic leading to the closure of the city's public schools. With the students returning to the classroom this school year, the club has been meeting in person during lunch and has seen its membership grow to 20 students.

"Our Rainbow Club is an amazing thing," said school social worker Kristine Keane, sporting a Pride bandana on her wrist, rainbow leggings and a black T-shirt with a rainbow design, as she helped to kick off the Pride event. "It got started last year when we were all learning from home and was a chance for those of us feeling lonely to build community online."

Keane, a straight ally, launched the club at the suggestion of the school's former garden teacher. This year she is co-leading it with Cassidy Hall, a paraprofessional at the school who served as flash mob director at the April 29 celebration.

The club also focuses on how the students can ensure their classmates are treated with kindness and feel like they matter, added Keane, who gave a shout out to the many parents who came to observe and participate in the Pride celebration. A number of them are now talking about forming their own parental version of the Rainbow Club.

"This turnout is amazing," Keane said. 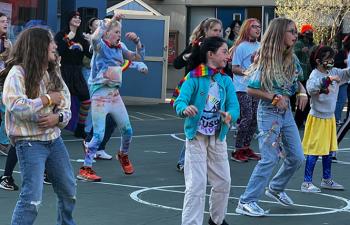 Taking place amid national debate
The school's Pride observance took place amid a heated national debate this year over if it is appropriate for elementary schools to be discussing issues around sexual orientation and gender identity. Several states are moving to enact policy similar to Florida's so-called "Don't Say Gay" legislation that bans such topics in kindergarten through third grade.

Critics fear such laws will severely curtail discussion of LGBTQ issues in any grade if teachers self censure themselves, fearful of being sued by parents who protest any mentioning of the topic in the classroom. Other policies are being enacted to strip away the rights of LGBTQ students, particularly those that are transgender or gender-nonconforming, and to purge books about LGBTQ issues from school libraries.

"They are aware this is happening in other parts of the country," Keane said of the students in the Rainbow Club. "They are also aware we are living in a very safe place for them and are all very grateful for that."

The San Francisco school district has long been a leader when it comes to teaching about LGBTQ people and topics. By the fall it plans to add an additional six to eight LGBTQ book titles to the libraries at all of its 72 elementary schools, such as the one at George Peabody.

"We are doubling down on our values of inclusion," Erik Martinez, manager of the school district's student and family services division, told the B.A.R.

Martinez, a queer Latinx, began with the division eight years ago as its LGBT program manager and took over as division manager in 2018. Friday's Pride event at the elementary school was the first one he has been able to attend in person since the start of the COVID pandemic in 2020.

"We have been marking Pride Month for about 30 years in the classroom," said Martinez, noting that it began partly due to LGBTQ parents who wanted a more inclusive family curriculum to be taught in the city's schools. "It is one thing to have a lesson in the classroom and it is another to have school-wide events with flash mobs and parading around the neighborhood."

Fifth grader Sherri Reifsteck, 10, had signed up for the club last year along with her younger sister, Ari. She told the B.A.R. she has enjoyed learning about LGBTQ history and hopes the club is imparting to all students at her school that they "can be themselves."