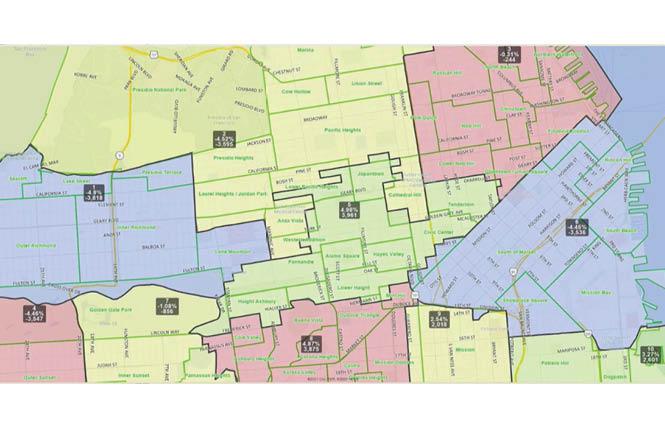 The final map of the city's 11 supervisorial districts sees the Tenderloin moved into District 5. Photo: Screengrab

A divided San Francisco Redistricting Task Force approved Thursday a new map for the city's 11 supervisorial districts that critics charged is a gerrymander of the city. It brought to a close an eight-month process marred by racial divisions, bullying of meeting attendees, heated infighting amid the panel members, and repeated hoodwinking of transgender residents of the Tenderloin and Chinese residents of the Portola.

The 5-4 vote to finalize a new political map for the city now moves the process to the courts and eventually the ballot box, as it will be used to elect the supervisors over the next decade starting with the even-numbered districts this November. One lawsuit already filed against the task force for having missed its April 15 deadline to complete its work as mandated in the city charter is now likely to be dismissed during a hearing Friday due to a map having been approved.

But the map is likely to be challenged in the courts. Task force member Jose Maria (Chema) Hernández Gil, part of the minority that opposed the final map, predicted as much during the body's April 28 meeting.

"This is a map that gerrymanders our city," said Gil, decrying that it resulted from a "deeply flawed" process. "I assume there will be legal challenges."

Among those upset with the work of the task force have been LGBTQ leaders, particularly in the Tenderloin and South of Market. The final map is splitting the two neighborhoods apart into separate supervisorial districts.

The Tenderloin and most of the Transgender District is now part of District 5 with the Western Addition, Japantown, and the Haight. The Leather and LGBTQ Cultural District in western SOMA is remaining in District 6 with the rest of SOMA, Rincon Hill and Mission Bay.

Jeremy Lee, one of two queer men on the task force, pointed out how the panel went back and forth six times over the last month on voting for maps that either moved the Tenderloin out of District 6 or kept it in the district. He called the yo-yoing decisions "cruel" to the residents of both neighborhoods.

"We incited communities and put them against each other," said Lee, who also voted against the final map because it "harms my own communities as a queer person and a voice for Chinatown. I can not in good conscience support this map."

Task force members J. Michelle Pierce and Raynell Cooper cast the other two votes against the final map. The four have consistently opposed the maps advanced by the task force, at one point walking out on the proceedings, because of the harm they felt was being done to various marginalized communities in the city.

"This map will always have issues for some communities," said Cooper. "It is up to us moving forward to overcome those issues as best we can."

In a statement ahead of Thursday's meeting the San Francisco Community Unity Map Coalition condemned "the lack of process and transparency" that resulted in a map "the public cannot stand behind," it contended.

"Instead of prioritizing the needs of our city's most vulnerable populations and communities of interest, including low-income communities of color, renters, LGBTQ populations, and cultural districts, the majority of the task force has chosen to keep wealthier, predominantly white communities whole and together in the final map," stated the coalition. "The nation's first Transgender Cultural District will be split in half, opening the doors to further displacement and invisibility of the transgender community. The Tenderloin will be severed from the SOMA and District 6, forcing a diverse vulnerable low-income community into a district they have repeatedly and adamantly rejected."

Disappointment all around
Even several of the five task force members who voted in favor of the map — chair the Reverend Arnold Townsend, vice chair Ditka Reiner, Matthew Castillon, Lily Ho, and Chasel Lee, the other out member — expressed disappointment in how the new boundaries ended up for the supervisorial districts. Ho echoed the complaints that it negatively impacts certain communities.

"This is not the perfect map I would like to see because I do think that Portola is being gerrymandered, but I will accept that hard choices needed to be made," she said. "I think we have done the best we could."

Castillon again defended moving the Tenderloin into District 5, pointing to emails and letters the task force had received from the public supportive of such a move. With District 6 seeing the bulk of the city's population growth over the past decade, it was impossible to maintain the current boundaries for it, he argued.

Ensuring the 11 supervisor districts had balanced populations, said Castillon, "was always going to be the central challenge with the entire map." Due to that "conundrum" the task force faced, "we could not keep everything together in District 6," he added. "It was not mathematically possible to do that."

Ho and Chasel Lee had strongly advocated for moving the Portola out of District 9 and into District 10 so it was connected with Visitacion Valley, both heavily Asian American neighborhoods with monolingual Chinese speakers. Chasel Lee grew up in the area and repeatedly said at meetings that he joined the task force to "raise the voice of the voiceless" of its residents.

But similar to what happened with the Tenderloin, the Portola moved in and out of District 9 during successive votes on proposed maps. The issue partly prompted the walk out by the quartet of task force members; ultimately the decision was made to keep the Portola in District 9 with the Mission and Bernal Heights in order to maintain the Potrero district and the Dogpatch in District 10, which was advocated for by both Latino and African American residents of the two districts.

"This entire process finally let us see what needs to be fixed in this city, that in itself, I think, while we couldn't resolve those conversations here, those are conversations worthwhile to be had," said Chasel Lee.

Although the Portola and Visitacion Valley will remain divided, Chasel Lee said he could live with the outcome because attention had been brought to the needs of the districts and their residents via the redistricting process.

"We have heard what they want for their communities and for the future. I am proud of that legacy," he said. "I can sleep well at night knowing their voices are now heard."

As for District 8 the Castro and its LGBTQ cultural district will continue to be at its center combined with the neighborhoods of Twin Peaks, Corona Heights, Duboce Triangle, Noe Valley, Diamond Heights, and Glen Park. At its northeastern edge will now be Ashbury Heights and Cole Valley.

But District 8 will be losing parts of the Mission Dolores neighborhood and nearly all of the Valencia Street corridor to District 9. Due to a carve out that saw his residence on Valencia between 24th and 25th Streets remain in District 8, gay Supervisor Rafael Mandelman will be able to run for reelection in the fall without having to move.

"I am sad to be losing a big chunk of that Valencia corridor, but I am looking forward to getting to know the residents and businesses of Cole Valley," Mandelman had told the Bay Area Reporter earlier this week.

To view the final map approved by the redistricting task force, visit its website.