Still no arrest in 2020 killing of bi transit advocate 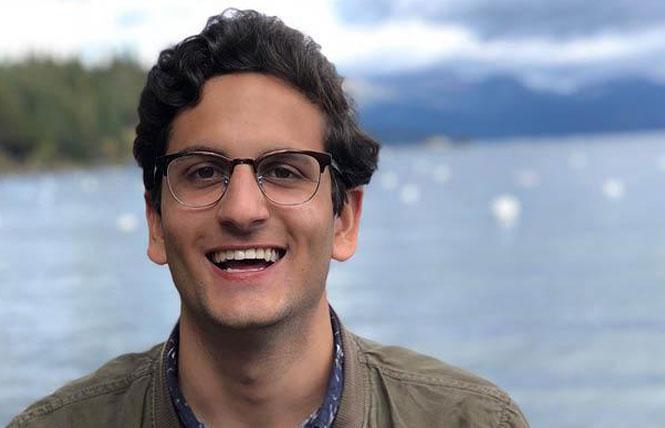 He was only 22 and powered by a strong desire to make the world a better place. On May 1, 2020, he was gunned down in a barrage of gunfire at 14th and Guerrero streets in San Francisco, the victim of what is suspected by police to have been a drive-by gunfight.

Courtney Brousseau, a bisexual transit advocate and product manager at Twitter, died three days later after being taken off life-support at Zuckerberg San Francisco General Hospital and Trauma Center. Another man who was also injured in the incident survived.

Only moments before the shooting, Brousseau tweeted a photo from the nearby Mission Dolores Park where he had eaten a burrito. "I just ate a delicious burrito in Dolores park and for a brief moment everything felt okay," he wrote in what would become his final tweet.

Two years later, Brousseau's case is still under investigation according to Robert Rueca, a public information officer with the San Francisco Police Department. However, "We are not able to speak to what the investigation has at this stage," he added.

While continuing to keep tabs on the case, gay District 8 Supervisor Rafael Mandelman said his office hadn't received any updates.

"Courtney's death was a tragedy for his family, friends, and an entire community that had come to know and love him," Mandelman stated in an email to the Bay Area Reporter. "The city has an obligation to do everything in its power to provide closure for those close to Courtney."

Jane Natoli, a trans woman who serves on the San Francisco Airport Commission, told the B.A.R. that she's disappointed to hear police have not yet made any arrests in the case.

"Courtney was someone I was just getting to know — that's the tragic part," she said in a phone interview. "A life cut short and a lot of people getting to know him post-college."

"The cheer with which he brought his advocacy was not necessarily common," she said. "That positive attitude of youth, but it's not just that, that was who he was."

Shortly after the shooting, SFPD's Captain Gaetano Caltagirone told the B.A.R. that SFPD's gang task force was trying to identify suspects and make an arrest.

James Caldwell, chief officer on criminal justice and public safety for Mayor London Breed, suggested at the time that the shooting was related to other violence in the Bay Area.

"It's spilled over from things going on around the city," Caldwell said at a 2020 meeting called by Mandelman, as Mission Local reported. "There have been issues with Valencia Gardens [the complex near where the shooting occurred.] There has been some cross-county work in trying to de-escalate the violence that's coming from San Francisco, Oakland, Richmond, and San Jose, and how these young men and women are maneuvering throughout the Bay Area. ... A task force has been put together to quell the violence, to ensure that young people take responsibility for their own neighborhood."

Last November, friends installed a plaque on the bench in Dolores Park where Brousseau took the photos for his final tweet. It's believed to have been done by the San Francisco Bicycle Coalition's Love Courtney project, as Hoodline reported.

As the B.A.R. previously reported, Brousseau graduated from Newbury Park High School in Ventura County, California in 2015. He was a valedictorian and the editor of the high school's newspaper, according to the Ventura County Star. The year prior, he interned at the office of Democratic former presidential candidate Massachusetts Senator Elizabeth Warren.

Brousseau went on to attend UC Berkeley, where he graduated in 2019 with degrees in economics and computer science, according to his website.

Brousseau was a co-organizer of Gay For Transit alongside Janice Li, a queer woman who is a member of the BART board of directors. Li did not return a message seeking comment for this story.

According to a fundraising page on the bicycle advocacy group's website friends and family of Brousseau would also like to memorialize him with a public parklet and a bike lane in San Francisco, noting that "Courtney would have loved a parklet created in his honor."

His family also continues to raise money for several scholarships created in Brousseau's honor, according to a separate webpage. One created in collaboration with the Newbury Park High School Scholarship Foundation is for students at the public school interested in pursuing a career in journalism or public policy, as Brousseau served as co-editor-in-chief of the school's Panther Prowler newspaper.

His family is hosting a celebration of life for Brousseau from 3 to 7 p.m. Saturday, May 7, at Newbury Park High School in Thousand Oaks, California. An additional memorial is to be held in the San Francisco Bay Area at a future date, according to the invite page for the event.

"A life lived so happily deserves a happy remembrance and special celebration. We've cried our tears and mourned our loss of Courtney. Now we give our grieving hearts relief by coming together to celebrate and honor the life of Courtney, a remarkable young man who not only had a zest for life but shared it with everyone he knew," wrote the family in a message on the event page.

Anyone with information about this case should contact SFPD's tip line at 415-575-4444.