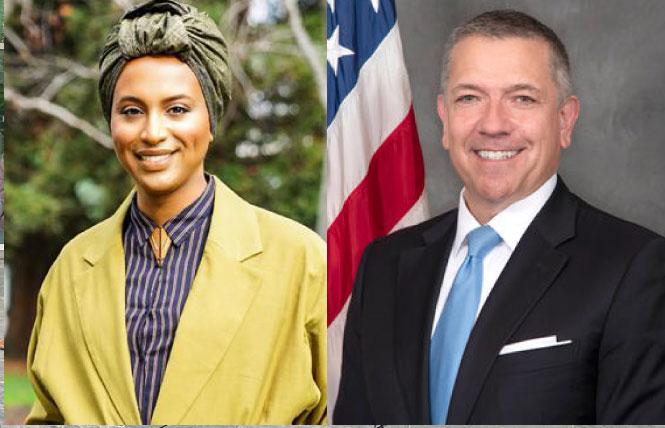 Mayor London Breed could double LGBTQ representation on the San Francisco Board of Supervisors with her nomination to fill the soon-to-be-vacant District 6 seat. She could also name the first known transgender person to serve as a county supervisor in California if she selects queer San Francisco Democratic Party Chair Honey Mahogany, who would also be the city's first out Black supervisor.

Or Breed could tap for the vacancy the highest-ranking LGBTQ person in the city's police department Matt Dorsey, a gay civilian who is director of strategic communications and part of Police Chief William Scott's command staff. He would be the second known person living with HIV to serve as a San Francisco supervisor.

"I may have to stop saying I am the only queer supervisor. I wouldn't be sad about that," gay District 8 Supervisor Rafael Mandelman told the Bay Area Reporter.

Either Dorsey or Mahogany would make for a great colleague on the board, added Mandelman, who is running for reelection to his seat in the fall.

"Matt Dorsey is a personal friend of mine and a talented public servant, and I think he would contribute a lot to the Board of Supervisors or to any public service he might want to do," said Mandelman. "I also think Honey Mahogany would be an excellent supervisor and would be history making."

Current District 6 Supervisor Matt Haney will officially resign from his board seat at 10 a.m. Tuesday, May 3, when he takes his oath of office to become the assemblymember for San Francisco's 17th Assembly District. He won a decisive victory in the special runoff race April 19 against gay former District 9 supervisor David Campos to succeed David Chiu. With Campos deciding not to campaign for the seat in this year's general election, Haney is nearly assured of being elected to a full two-year Assembly term in the November 8 election.

For years Dorsey had served as Herrera's spokesman as the city's top lawyer. He formerly served on the elected committee that oversees the local Democratic Party and held the office of secretary on it. Until very recently Dorsey had served on the board of Mid-Market Neighbors, having helped to co-found the neighborhood association.

As for him now potentially being tapped for the supervisor seat, Dorsey isn't commenting publicly. One of the few LGBTQ leaders to endorse Haney for Assembly, Dorsey declined the B.A.R.'s interview request Tuesday for this article.

Mahogany has worked for Haney as his de facto chief of staff at City Hall and has made no secret about her interest in succeeding him on the board. Even before Haney entered the Assembly race, Mahogany had indicated she planned to campaign for the District 6 supervisor seat once it became open.

As he sought the Assembly seat over the past seven months, Haney had often noted a vote for him could lead to Mahogany being appointed as his replacement on the board and making LGBTQ political history. In addition to being San Francisco's first transgender and queer supervisor, Mahogany would be the second nonbinary supervisor in the Golden State, as San Diego County Supervisor Terra Lawson-Remer is nonbinary and pansexual.

Talking to the B.A.R. Tuesday ahead of her boss' final full board meeting, Mahogany said she remained "hopeful" that Breed would see the benefit to the district in naming her its next supervisor and the message it would send nationally.

"I am hoping she takes into account the breadth of my experience and what it would mean to have a transgender supervisor right now with the anti-trans rhetoric and legislation being passed all across the country," said Mahogany, who is also a co-owner of the Stud bar collective and a drag artist who garnered national attention as a contestant on the television series "RuPaul's Drag Race" in 2013. "There are only six months before the November election, and District 6 deserves that continuity during this upcoming budget cycle, which we are in the middle of right now."

Whomever Breed names as the new District 6 supervisor will need to run on the November ballot for a full four-year term representing the newly drawn district expected to be finalized by the city's redistricting task force Thursday. The Tenderloin and most of the city's Transgender District is being removed from District 6 under the new map and put into the new District 5.

All of South of Market, where Dorsey and Mahogany both live, is remaining in District 6 along with Rincon Hill, Yerba Buena, and Mission Bay. Some have suggested that Mahogany move to District 5 and run to be its supervisor when the seat will be on the November 2024 ballot when the current officeholder, Supervisor Dean Preston, is expected to seek reelection.

"Two years from now? There are more pressing things happening right now in District 6," said Mahogany when asked about her interest in running for the other supervisor seat.

Asked if the mayor naming someone else as the next supervisor would impact her decision to enter this fall's race for the seat, Mahogany replied, "Similarly as with the redrawing of the district lines, the appointment will not impact my plans for the future." 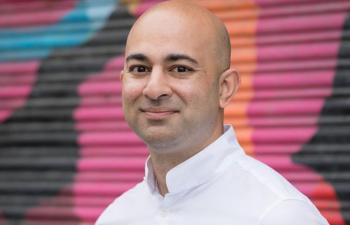 Sources in recent days told the B.A.R. that Breed is being pressured not to pick Mahogany since she is seen as being more aligned with the city's progressive faction within the local Democratic Party. They want Breed to name someone more moderate, with Dorsey seen as being part of that camp along with former Obama administration staffer Bilal Mahmood, who came in third place in the Assembly race and then endorsed Haney.

"I like Bilal too, but I think that Honey and Matt have a track record of public service in San Francisco, and involvement in the LGBTQ community, and involvement frankly in the Democratic Party in both cases for many years, if not decades," said Mandelman. "I think there are at least two very strong queer candidates for that job. They both have a lot to offer, both are very talented, and I would like to see both on the Board of Supervisors. If I were the mayor, I would be looking closely at both of them."

Two other names floated as possible appointees are American Civil Liberties Union deputy director Vikrum Aiyer, a member of the mayor's Workforce Investment Board; and Planning Commission president Rachael Tanner, who was appointed to the powerful oversight body by Breed.

After Breed didn't name an LGBTQ parent in March for one of the three school board seats vacated by the three former members recalled in February — and so far not naming an LGBTQ person (or a straight appointee) to the seat vacated in February by gay former City College of San Francisco board vice president Tom Temprano when he was hired as political director of statewide LGBTQ advocacy organization Equality California — LGBTQ leaders are watching closely to see who the mayor taps for the supervisor seat.

"This definitely has to be an LGBTQ seat. We did not get an LGBTQ appointee on the school board, and our representation is at an all-time low right now in the city," said Gary McCoy, stressing he was speaking personally and not as co-chair of the Alice B. Toklas LGBTQ Democratic Club, for which Mahogany formerly co-chaired its political action committee and now sits on its policy committee.

Web Extra: For more queer political news, be sure to check http://www.ebar.com Monday mornings for Political Notes, the notebook's online companion. This week's column reported on the proposed electoral map for San Francisco's 11 supervisorial districts set to be approved April 28.

Political Notebook: 1st parent of a transgender child set to serve in CA Legislature
Sign up!