GHB: The 'elixir' that no one is talking about (but everyone is drinking)

by by Adam Echelman 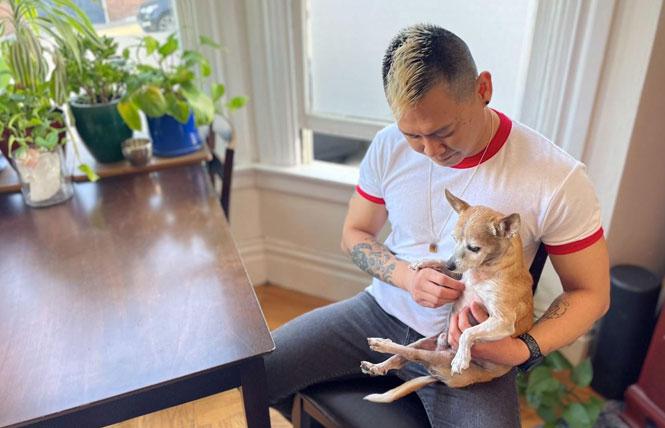 Franz Lao lives in a one-bedroom apartment in San Francisco's LGBTQ Castro neighborhood with his dog, Cody. He serves on the board of the Castro Country Club in order to help others recover from Gamma-hydroxybutyrate, known as GHB or G, and other substance use disorders. Photo: Adam Echelman

Franz Lao had a few quiet hours at work so he left the office to take some meth and drink some G. When he returned to the office later to present at a 6 p.m. corporate board meeting, he was high, but he felt great. "Then all of a sudden the G starts to surpass the meth," he recalled, "and I started just 'falling out' in the board meeting." To his co-workers, it looked as though he had suddenly become drunk and manic.

That was back in 2009, when Lao was using Gamma-hydroxybutyrate, known as GHB or G, every few hours. He got fired after that board meeting and started to use G even more. Jobs were harder to come by as the nation spiraled into the Great Recession. One morning after losing his job, he woke up and went looking for his car so he could go out and buy more G. "I walked around the block — I couldn't find it," he said. The next day, he got a letter that his car had been repossessed.

Today, Lao, who identifies as gay, has been sober for more than a decade and serves on the board of the Castro Country Club, a clean and sober coffeehouse and meeting space in the LGBTQ neighborhood. He is 48 years old and is soft-spoken with an unwavering smile, even when he talks about the challenges he faced while using G.

"It was the elixir that fixed everything," he said. A stressful job, depression, anxiety — it all led back to G.

There is little public awareness about G, but for gay men in San Francisco and across the country, it is a staple for many raves and sex parties. The intake survey from the San Francisco AIDS Foundation, which includes roughly 10,000 patients, shows that more than 6% of people reported using G in 2021. For context, that's more than three times the number of people using MDMA/molly/ecstasy. And for some, G has become an addiction, too. Chad Ngo, the communications manager with SFAF, said that roughly half of the 120 clients in the foundation's Stonewall Project's substance use treatment and harm reduction program have used G.

The use of G came to the fore recently in the case of Jaxon Sales, 20, a gay man who died in March 2020 from an accidental overdose of G, cocaine, and methamphetamine, according to the San Francisco Office of the Chief Medical Examiner. He was found naked at the Rincon Hill apartment of a 41-year-old white man. His parents have sought more details from San Francisco police and the medical examiner's office and held a rally in late February to garner public support and mourn their son.

Billy Lemon, a gay man, heard about the Sales case, but he is quick to point out that it isn't an outlier. He's the executive director of the Castro Country Club, located in a converted Edwardian townhouse just steps away from some of the city's most popular gay bars and clubs in the LGBTQ neighborhood. He's also a former drug user and dealer. 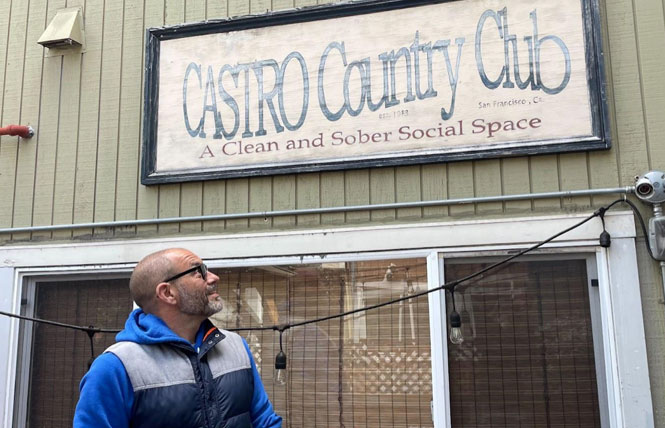 Billy Lemon is the executive director of the Castro Country Club, a sober community space in the heart of the Castro. He is also recovering from substance use disorders, including the use of G and meth. Photo: Adam Echelman

From GNC to GBL
While G is considered a depressant by medical professionals, it has had a wide range of almost contradictory applications over the years. The first clinical application of GHB in 1962 hoped it might serve as a safer alternative to the sleeping medicines available at the time, according to a paper published by the International Anesthesia Research Society. Further research cemented it as a treatment for narcolepsy, an application that still exists today. As police began clamping down on recreational steroid use in the 1980s, weight lifters popularized small doses of GHB as an alternative for augmenting muscle growth, and soon, it started to double as a party and sex drug. Its acidic properties led to other applications too, like paint stripping and stain removal.

By the 1990s, gay men were buying G in powder form at the GNC health foods store near the intersection of Dolores and Market streets and filling Gatorade-sized plastic bottles with a few ounces of G and a chaser. Lemon and Lao both began using G in the 1990s, during a heyday of San Francisco's rave culture. Parties would last until 4 a.m. at places like Club Universe, after which point people would spill over to Castro Station, where Lemon conveniently worked as a bartender.

"Everybody says the slang for G is, 'Do you have a cap?' Meaning the cap from the bottle," explained Lemon. "That's all you need." Since it is transparent like water, it's easy to mix a cap of G into a regular beverage. Lemon remembers one store in the Castro that sold the perfect water bottles for G: they were cheap, had the perfect-sized cap, and the plastic was strong enough that the G wouldn't burn through it. G tastes salty and sometimes has a metallic or acidic flavor, depending on whether it is actual GHB or a knock-off, but the taste can be somewhat disguised by the drink it is in.

Around the turn of the millennium, Congress took notice of G after it was sampled in date-rape and murder cases involving young women. It became an illegal, Schedule 1 controlled substance with limited pharmacological exemptions. Those high-profile cases created a popular conception that G was something men might slip into an unsuspecting woman's drink at a bar. What lawmakers and the media missed — and continue to miss — is the recreational market for G. That market is overwhelmingly gay and male.

Once it became illegal to purchase over the counter, men started buying gallons of G and shipping them from Europe or China to San Francisco. Stronger knock-off drugs like Gamma-butyrolactone (GBL) emerged, which led some men to overdose easily because they mistook it for GHB and assumed it should be consumed at the same dosage. Regardless of the particular chemical, G was relatively cheap at first, typically about $10 per ounce, said two former dealers who asked that their names not be used. Over the years, the price has risen, and it has become harder to acquire, though by no means impossible. 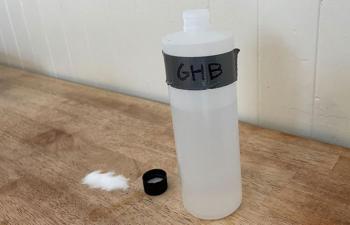 Gamma-hydroxybutyrate, known as GHB or G, can come in powder or liquid form, but most people drink it in plastic water bottles. The cap from this bottle is sometimes used to measure the right dose of G. Photo illustration: Adam Echelman

At the right dose, G induces a sense of euphoria and intense sexual arousal, and unlike the other drugs, G doesn't induce a hangover feeling the next day so it's easy to consume it regularly. Many men interviewed by the Bay Area Reporter mixed G with meth, moving seamlessly through clubs, house parties, and bathhouses over days and nights.

But getting the exact right dosage is tricky, and with a little too much, the user can pass out and fall into a nearly comatose state. Sometimes, they start moaning, screaming, or start seizing.

"The most important thing is for people not to freak out and to put them on their side so that they are going to breathe if they vomit," said Adam Zeboski, a lead registered nurse with the San Francisco AIDS Foundation.

At first, Lao used it on weekends only, but he liked G so much and the hangover seemed so minimal that it soon became his drug of choice when meeting friends at bars on weekdays too. He started studying everything he could about G to understand the right dosage, to anticipate any adverse side effects, and to manage his and his friends' experiences while using. One key resource was dancesafe.org, which provides detailed information on how to use a range of common party drugs safely. (Representatives from DanceSafe did not respond to a request for comment.)

He didn't intend to get sober at first. But Lao had a crush on a man who was attending 12-step meetings like Alcoholics Anonymous and Crystal Meth Anonymous, and he figured his own participation might bring them closer together. While the relationship didn't work out, the fellowship meetings piqued his interest, and ultimately, he decided to admit himself into the Friendship House's substance use treatment program.

"I was just raving, and I was sober," he recalled: "I was just the happiest I've ever been."

This is the first article in a three-part series about GHB use in the gay community.

Calls for justice raised at SF vigil for gay man