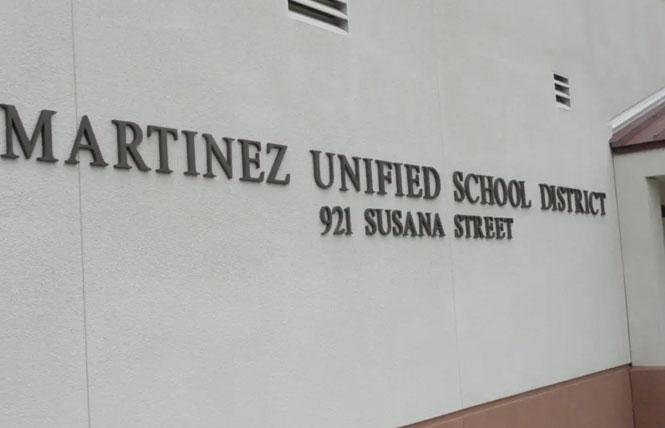 The Martinez Unified School District will fly the Pride flag at its main office in June. Photo: Courtesy Patch

The Pride flag will, indeed, fly over the Martinez Unified School District office in Contra Costa County, after a resolution first proposed earlier this month was finally passed at the school board's April 25 meeting.

The measure, initially proposed by interim Superintendent Helen Rossi, declares June as Pride Month for the 4,125-student district, and paves the way to fly the Pride flag over the school district office grounds. After discussion over the course of two meetings, school board members voted 4-0 to support the resolution, with one member, Carlos Melendez, abstaining.

The issue is once again being considered by school districts ahead of the annual LGBTQ celebrations that take place in June but in a more heated atmosphere this year. Elected officials at the school board level up to state legislatures across the country in recent months have enacted policies that strip away the rights of LGBTQ students, particularly those that are transgender or gender-nonconforming.

In Gilroy in the South Bay, its school district last week passed a resolution proclaiming June LGBTQ Pride Month for the first time, according to a news release and tweet by Zach Hilton, a Gilroy City Council member.

"History has been made in the Gilroy Unified School District. This is the first Resolution passed to recognize LGBTQ+ Pride Month within the GUSD School District," tweeted Hilton on April 23.

History has been made in the Gilroy Unified School District. This is the first Resolution passed to recognize LGBTQ+ Pride Month within the GUSD School District. @BAYMEC @LGBTQSCCgov @TheQCorner #HiltonForCouncil #Gilroy pic.twitter.com/QUd7p3UP63— Zach Hilton (@ZachHilton_CA) April 23, 2022

When the resolution first came up before the East Bay school board at its April 11 meeting, according to a video, several members expressed concern about flying a flag other than the California and United States banners. Some worried it would pave the way for any group at all to request their flags be flown over the district as well.

Martinez school board President Deidre Siguenza wondered if the district would be setting a new precedent for different flags upon request.

No one at the meeting seemed to know but most had concerns.

"Historically, we've not flown any other flags, right?" asked board member Jeremie Ginelli. "We've gotten requests in the past and those requests have been denied, all correctly."

Rossi said she thought she remembered the subject coming up before and it being noted that some of the groups that might want to do so "might not be groups we'd want to support."

Board Vice President Anne Horack Martin said the issue left her torn. While she flies a Pride flag at home she, too, worried about what precedent might be set by the district flying the flag.

"Does it come to the board every time?" she wondered. "I would say I'm struggling because this particular cause is so important and, then, what about the next cause about which I feel completely differently about?"

Board member Melendez had a simple solution: just continue to fly the American and Californian flags, as the district has always done.

"It's equal to all," he said. "That way no one is getting preferential treatment. It's fair."

Eventually, the floor was opened for the public to comment and four did. Two parents spoke in favor of the resolution, as did Sara Stafford, who teaches art at Alhambra High School and said she was disappointed to hear school board members "vacillating" over the issue.

California flies the Pride flag she noted, as does the City of Martinez and "most every district." To not do so would send the wrong message, Stafford said.

Contra Costa Community College Board Trustee Rebecca Barrett threw her support behind the resolution, as well.

Coming to the end of the meeting, the board agreed to amend the proposed resolution by adding language recognizing the mental health dangers to many LGBTQ kids and their need for a supportive environment. With that, the resolution was postponed to April 25.

When that meeting finally rolled around, in a video of the proceeding Rossi read the proposed resolution from the previous meeting with the new language added. Numerous people were on hand to voice their support. In fact, the only person to voice any opposition to the resolution all evening was Melendez.

After Ginelli expressed a desire to set up parameters for future, potential flag requests, Melendez spoke up, expressing an understated opposition to the resolution.

"I support any practice, trainings, community groups, organizations that demonstrate effectiveness to help improve our social understanding and acceptance and betterment of the community," he continued, "and then teach our children to be respectful and accepting of one another. But I don't think demonstrating the Pride flag at this time is equitable and representative of support of the entire community."

There was a notable, awkward pause before Martin spoke up.

The board needs to make a stand, she said, and it needs to take it seriously. There may be issues with the flag policy but, she added, the board already has a consensus on the matter and those additional concerns can be dealt with as they come up.

"I would be in favor of just moving this forward," she said, even if it were done conditionally.

Melendez's views would be the only statement in real opposition to the resolution all evening. Searching for ways around the possibility that the board might have to entertain requests to fly the flags of organizations and groups who didn't share the school district's values, others began to encourage the board to support the resolution anyway.

One student who identified as trans said they supported the resolution because they had endured slurs and harassment from students, and teachers who wouldn't call them by their correct name or proper pronouns.

"Even when reported, it doesn't get taken care of the way it needs to," they said.

A woman with two LGBTQ children in the district told the board they needed to support the resolution.

"Voting yes today is a small show of support for these kids, teachers, and parents in the queer community," she said. "Voting no is a blatant disregard for who they are, and you're saying to these families 'we don't care enough about your inclusion or even your safety enough to do what's right.'"

More people spoke; emails of support were read, as well. It was finally time to vote. As the small crowd who attended the meeting applauded the resolution's passage, the board moved on to the next item on the agenda.