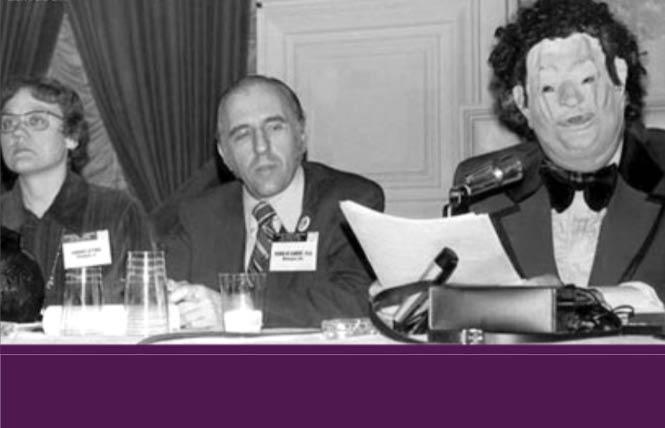 Dr. John Fryer, right, wore a mask and disguised his voice when participated in a homosexuality panel at the American Psychiatric Association's annual convention in 1972. Photo: Kay Lahusen

It had to have been a surreal scene. A standing-room only audience packed the hall at the 1972 Dallas conference of the American Psychiatric Association, watching a man dressed in what many remember as a full-face rubber mask of then-President Richard Nixon, wearing a wig and an oversized tuxedo and, speaking through a voice modulator, tell the audience, "I am a homosexual. I am a psychiatrist."

Those were the first words of a short speech given by a figure named Dr. H. Anonymous that would set in motion a massive sea change for people regarded by the APA — and most Americans — as mentally ill at best, dangers to society at worst. With that speech, and within a matter of just a few years, gays and lesbians would be able to seize opportunities that had been denied them based solely on medical claims with no merit, and which had already been debunked but ignored 20 years before. And very few people before then would know just who the man in the mask was, before he came clean at that year's APA convention in Philadelphia. That man was Dr. John Fryer.

May 2 will mark the 50th anniversary of the speech Fryer gave anonymously to an audience of his professional colleagues at their annual convention, calling for an end to the APA designation of homosexuality as a psychiatric disorder. The anniversary is being marked with several observances and proclamations both in Philadelphia and Washington, D.C., including proclamations issued by both the Philadelphia City Council and the governor of Pennsylvania, and resolutions being submitted to Congress, which are currently sitting in committee. His residence, at 138 W. Walnut Lane in Philadelphia was added last month to the Philadelphia Register of Historic Places.

That's a lot of recognition for a man who, really, doesn't have a lot of acknowledgment. Yet, that speech, roughly 1,100 words in length and less than two full pages, did more to change the lives of LGBTQ Americans than, arguably, any other speech, protest, or action. That speech, delivered to a fairly narrow audience — closeted gay psychiatrists and their straight colleagues — was the linchpin in a series of actions against the APA by other activists of the time. Late activists Barbara Gittings and Frank Kameny had staged public protests in the 1960s calling for equal treatment of homosexuals but had recognized that little would change for anyone until gays and lesbians were no longer treated as mentally ill, as described at the time in the APA's Diagnostic and Statistical Manual of Mental Disorders, or DSM.

"The fact that the APA classified us as being mentally ill was used to buttress anti-gay statutes and regulations," said Malcolm Lazin, in a phone interview from Philadelphia. "It was the first to knock away the underlying reasons for the way the official government treated gays."

Lazin, a gay man, is the executive director of Equality Forum, a national and international LGBTQ civil rights organization based in Sarasota, Florida.

"We were feared and loathed," Lazin continued. "We were people that were criminally or mentally deranged so this was the beginning of changing the stereotypical narrative of homosexuals. We would not have gained our equality to the degree we have had those stereotypes remained."

In 1970, gay and lesbian activists disrupted the APA's convention in San Francisco, and then again in 1971. The psychiatric organization agreed to hold a panel at its next convention in 1972, in Dallas. It was there that Dr. H. Anonymous — the heavily disguised, deeply closeted Fryer — delivered his speech. In 1973, after much more work, the APA board of trustees voted to delete the designation of homosexuality as a mental disorder, although it maintained a classification for LGBTQ people distressed by their own homosexuality.

Membership of the APA voted 58% in favor of the changes although, notably, 42% voted against them. It was only in 2013 that even "persistent and marked distress about sexual orientation" was finally removed. The DSM also dropped gender identity disorder that year, and introduced instead the term gender dysphoria, now commonly applied to people who identify as transgender.

Paul Steinke, executive director of Philadelphia's Preservation Alliance, agreed the removal of the mental health stigma against LGBTQ people was a crucial step in LGBTQ equality. He testified to the Philadelphia Historical Commission about the significance of adding Fryer's home of 30 year to the Philadelphia Register of Historic Places. That designation was granted last month.

"I think the main obstacle to LGBT people getting ahead in life is the stigma attached to being LGBT," said Steinke, a gay man, "and if that stigma is rooted in medical and mental health, it would be very hard to overcome. He removed that stigma and the importance of that cannot be overestimated."

Fryer, he said, "played an outsized role in demolishing those prejudices."

A closeted man
In many ways, Fryer would have seemed the last person to do the job. Deeply closeted, 6 feet 4 inches tall, and by many accounts a flamboyant man, he had experienced a great deal of discrimination because of his sexuality. In the mid-1960s, he left a psychiatric residency in Topeka, Kansas because of the amount of homophobia he encountered there, moving to Philadelphia to continue the residency with the University of Pennsylvania. That would not last; he was forced out of the position because he was homosexual. He finally completed his residency in 1967 at Norristown State Hospital.

When Gittings and Kameny approached him in 1972, he was a professor at Temple University. The two activists had approached several others first in hopes they might agree to speak at a panel titled "Psychiatry: Friend or Foe to the Homosexual?; A Dialogue" at the APA's convention that year in Dallas. No one would agree to do it, causing Gittings to consider reading anonymous letters from gays and lesbians to the convention but, trying one more time, they asked Fryer. As yet untenured in his position at Temple University, Fryer was understandably reluctant to speak but Gittings and Kameny convinced him to do so, disguised. Masked or not, his speech riveted the audience at the convention that year.

Less an address to humanity pleading for equality, Fryer's speech was directed to his fellow psychiatrists, particularly his fellow closeted colleagues in the APA. For years, there had been an informal association of gay members, jokingly called the Gay PA, and it was to them he directed his remarks.

"As psychiatrists who are homosexual, we must look carefully at the power which lies in our hands to define the health of others around us," he said in his speech. "In particular, we should have clearly in our minds our own particular understanding of what it is to be a healthy homosexual in a world which sees that appellation as an impossible anachronism — one cannot be healthy and homosexual, they would say."

People don't really understand how important or dramatic this speech was, said gay playwright Ain Gordon, "because the speech is very grounded ... it is not able to convey the depth of risk he took."

Gordon, 60, and the winner of three Off-Broadway Theater Awards, or Obies, wrote the play "217 Boxes of Dr. Henry Anonymous," which was performed first in 2018 at the Baryshnikov Arts Center in New York City. Until he had been invited by the Historical Society of Pennsylvania to go through their archives, he had never heard of Fryer, he said in a phone interview from New York.

Gordon spent 13 months researching Fryer, from information found in the psychiatrist's papers, stored in 217 boxes at the historical society. Traveling to Philadelphia weekly from New York for three days at a time, thanks to a grant from the Pew Center for Arts & Heritage, Gordon eventually completed the work detailing a very complicated, very human individual.

"You want his early life to justify what he becomes and of course, it doesn't," said Gordon. "If he seems childish or petty. ... You don't want that."

But, of course, it's those details that humanize heroes.

Fryer had a big voice, a theatrical persona, threw huge parties, and had multiple lovers at a time, Gordon said. The psychiatrist was very private yet "[t]here's evidence that he didn't like not being celebrated," he added.

"What you really find is that he is as complicated as anybody you know," said Gordon.

Still stigma for LGBTQs in mental health
While Fryer made history with his speech at the APA convention, it wasn't the only significant work he did. He would eventually go to work treating gay men with AIDS, as well as helping St. Christopher's Hospice in London to restructure its educational outreach. He is well known for significant work, too, in the area of death and bereavement. For many years, Fryer was being treated for diabetes and pulmonary sarcoidosis. He died in 2003 from gastrointestinal bleeding and pneumonia at the age of 65.

Ironically, despite the huge leap forward as a result of his anonymous speech 50 years ago, the issue of mental health still continues to dog LGBTQ people. The only thing that has really changed is the context. Rather than packing off gays and lesbians to mental wards for lobotomies, the new version is conversion therapy. That widely debunked theory aims to change a person's sexual orientation or gender identity. The APA opposed it in 1998.

There's more work to be done, said Dr. Katharine Dalke, an assistant professor in the Department of Psychiatry and Behavioral Health at Pennsylvania Psychiatric Institute.

"That's one thing that has not changed," Dalke said in a phone interview from Harrisburg, Pennsylvania. "I think the other things that have persisted across the whole community, while mainstream medical associations have really come to the point of saying that we don't think being gay or being trans, is itself a mental illness, there is still plenty of stigma in mental health spaces for LGBTQ + people."

Dalke, a bisexual intersex woman, works extensively with LGBTQ patients who have already been subjected to conversion therapy. Some 10% to 20% of the patients she sees, she said, have been told there is a way to change themselves. Conversion therapy on minors has been banned in some communities in Pennsylvania, including Pittsburgh and Philadelphia, but not by the state itself. (Conversion therapy for minors is banned in 20 states, including California, and Washington, D.C., according to the Movement Advancement Project.)

"I think Fryer's work impacts what I do on a daily basis in a couple ways," Dalke, 37, said. "It helps remind me of the context that my patients are bringing me when they come to me seeking mental health care.

"They've also grown up in a culture that, to some extent, still has negative associations between mental health and sexual diversity," she said. "Much less so for gay and lesbian people but very much so for trans people."

Her patients often anticipate that she is going to behave in a way that is rejecting, she said. They have some anticipation that she'll make them jump through hoops to access the help they need.

"It's helpful for me to remember that that has been part of my profession," she said.

"What [Fryer] did was not just removing homosexuality from the DSM," Dalke said. "What he did was to say to a group of physicians, the way that you have been constructing this problem is exactly wrong.

"You're saying we're crazy is what's making us sick," she said.


For more on John Fryer Day, check out the Equality Forum's website.